Not Released
Sample In stock
RFC: 10 25
Experience: Works
Not Used
3 Twins
Get This Part

This part is in RFC25 standard to facilitate fusing with other CDS. MLS in RFC10 standard (BBa_K1119000)is submitted as alternative. but cannot be fused directly to other CDS due to limitations in RFC10. Users who obtained the part in RFC10 standard can obtain the part by PCR and fuse to other domains using Splicing by Overlapping PCR.

In our characterization, the CDS of MLS was assembled in frame with that of GFP reporter using Freiburg’s RFC25 format(BBa_K648013). The translation unit was driven by CMV promoter (BBa_K1119006) and terminated by hGH polyA signal (BBa_K404108).

The MLS-GFP generator (BBa_K1119009) was then transfected into HEK293FT cells. Mitochondria were stained after transfection and co-localization was determined by area of signal that overlapped.

To quantify the amount of signal overlapped between the GFP signal and the red fluorescence signal from MitoTracker ® Red CMXRos, we adopted the method described by A.P. French et al. in “Colocalization of fluorescent markers in confocal microscope images of plant cells” (French et al., 2008). With the use of Pearson-Spearman correlation colocalization plugin for ImageJ, scatterplots of the green intensities (y-axis) and red intensities (x axis), Pearson's correlation coefficient and Spearman correlation coefficient were generated.

The detailed protocol of our characterization can be found in HKUST iGEM 2013 Wiki. 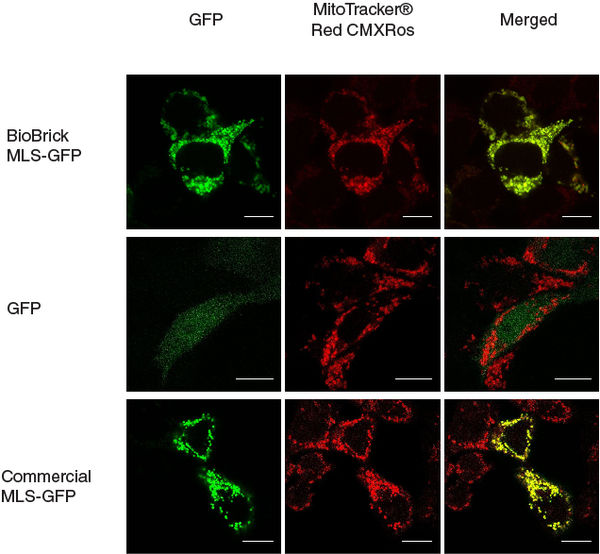 Figure 2. Scatter plots of fluorescence intensities of green (y axis) and red (x axis) from images shown in Figure 1. It showed that the BioBrick MLS-GFP and commercial GFP construct had linear relationship of green intensities and red intensities while the GFP generator had no relationship. Pearson's correlation coefficient (rp) and Spearman correlation coefficient (rs) were determined using the Pearson-Spearman correlation colocalization plugin (French et al., 2008) for ImageJ with a threshold of 0 and listed for each image. 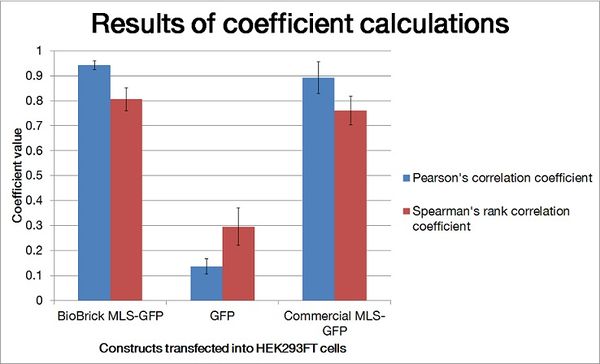