pBad is an E. coli promoter that is tightly controlled by:

one study concluded that arabinose can change the conformation of araC and prevent it from successfully binding to and repressing pBad.

>Internal Priming Screening Characterization of BBa_I0500: Has 1 possible internal priming site between this BioBrick part and the VF2 primer.

IISc Bangalore 2016 showed catabolite repression of expression from the promoter by glucose. Check results on Experience.

OUC-China 2016 characterized BBa_I0500 of different concentrations of L-arabinose on the transcriptional level. Check results on Experience.

TU-Eindhoven 2017 optimized the expression on by testing 3 different temperatures, where 37 degrees Celcius proved most successful. Addition of L-arabinose has also been optimized to compensate for the breakdown of L-arabinose by the E.coli strain BL21(DE3) for mCherry and GFP expression. Check results on Experience.

BHSF_ND 2019 Characterised the efficiency on the function of translating fluorescence under different inducer concentration at the given time of 240 minutes and under different time stage at a given inducer concentration.Also, we find out that at a certain time node that the system will suddenly increase its productivity. At last, the result suggested that both system have noticeable leakage and Xyls has much higher leakage. Check results on Experience. Induction of the pBAD Promoter

Promoter pBAD is induced with inexpensive and non-toxic monosaccharide L-arabinose and in bacterial strains deficient in arabinose catabolism. This promoter is tightly regulated and can reach moderately high levels of downstream gene expression.In order to obtain a dynamic range and proper concentration to induce the expression of dCas9, we use the cytometer to characterize the pBAD/araC promoter on respectively medium copy number pSB3C5 and low copy number pSB4A5 in TOP10 and found the fluorescense is increased as the concentration of arabinose increases (Figure 1).After we changed the downstream gene "sfGFP" with "sfGFP fused dCas9" on pSB3C5, it was observed that the expression of dCas9 from pBAD promoter can be modulated over a wide range of arabinose concentrations (Figure 2). The pBAD promoter holds great potential to control the expression of genes that require tight regulation, as it is capable of both an induction and repression. The pBAD promoter exhibits an almost all-or-none behavior upon induction with arabinose when located on a high copy vector, but allows for gradual induction when cloned into a low copy vector. Based on these research findings, a low copy vector was used to investigate the ability to inhibit gene expression subsequent to induction of pBAD. 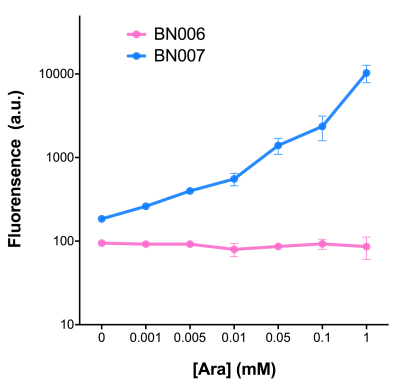 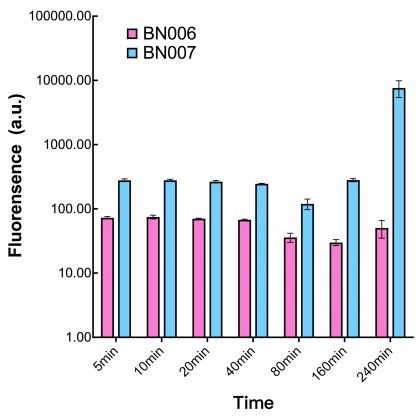 In our experiment of leakage testing, we used low-copying plasmid backbone PSB4K5, with a PSC101 origin of replication.

The inducer with their respective promoters (AraC & pBAD) are coupled with sfGFP to see if there is actually expression leakage when inducer is present quantitatively through flow cytometry. We tested fluorescence under different inducer concentration at the given time of 240 minutes and under different time stage at a given inducer concentration. Theoretically when the inducer (AraC) are present, the promoter (pBAD) is initiated therefore sfGFP is expressed; while sfGFP shouldn’t be expressed if inducer is absent. When measured at the end of 240 minutes without inducer, BN007/Contains BBa_K3202030(pBAD+sfGFP) has a basal leakage of 90 a.u. compared to BN006/Contains BBa_K3202029(backbone without GFP). The result suggested that this system have noticeable leakage.

We found an intriguing result when measuring the fluorescence of the two system under a constant inducer concentration of 1mM. During the first 160 minutes, the fluorescence of BN007/Contains BBa_K3202030 is 200 a.u. higher than BN006/Contains BBa_K3202029. However, at 240 minutes, the fluorescence value suddenly increased to 7641 a.u., which is 7590 a.u., higher than the backbone. Therefore, in the subsequent experiments, systems are induced to up to 4 hours to ensure the accuracy of the experiment. Results shown above verified the presence of expression leakage of the system when inducer is not expressed through the detectable fluorescence of reporter protein using flow cytometry.