1 Registry Star
121 Uses
Get This Part

Yellow fluorescent protein (EYFP) reporter coding sequence without the Ribosome Binding Site. Modified with an LVA tail for rapid degradation of the protein and faster fall time for the emission. Annotated mutation cause a Q81L mutation that appears to not be near the active site.

According to the registry, BBa_E0034 should be more stable than BBa_E0032, so our hypothesis is BBa_E0034 is more stable than BBa_E0032. In order to determine the fluorescence stability of the two parts (BBa_E0034 and BBa_E0032) expression products, the fluorescence/OD600 (Fl./OD600) values according time in every groups were measured. BBa_J23107, from a constitutive promoter family, was chosen as the promoter, and BBa_B0062 and BBa_B0011 were chosen as the terminator. Those parts had successfully worked with RFP, and that’s why we are using them. BBa_J23107 (promoter) and BBa_B0062 and BBa_B0011 (terminator) were ligated in to vector pSB1C3.

A. culture them in 5 mL LB medium at 37 ℃  and wrap the culture tube with tin paper to avoid light influence.

4. Use primitive E. coli (DH5α) as negative control, and use E. coli with the same promoter and terminator connected GFP. Culture the E. coli in 5 mL LB medium in three tubes at 37 ℃ (with tin paper as light barrier).

6. Measure the ABS and fluorescence of blank group and experimental groups every 1 hour. The first 3 hours were not diluted. Diluted 5 times from the fourth time. Measure 10 times in total.

7. Draw the fluorescence-ABS curve and compare the stability of the two fluorescent proteins.

2. The protein expression of E0032, E0034 and blank control in E.coli cells were detected by laser scanning confocal microscope analysis. 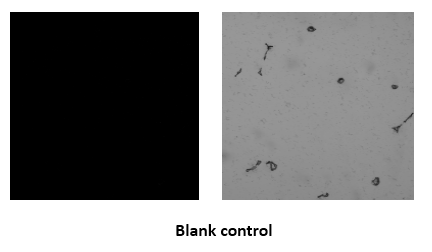 The results indicated that both E0032, E0034 and blank control had fluorescence, but the fluorescence is very weak. 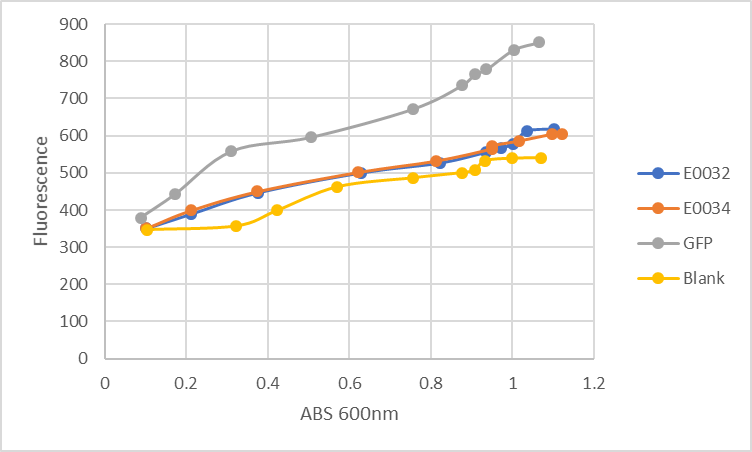 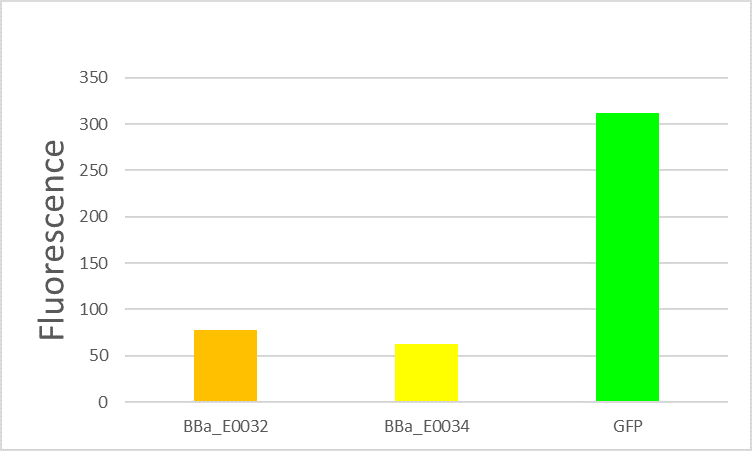 We can see fluorescence signals under the laser scanning confocal microscope, which tells that we have correctly built the plasmid. However, comparing with GFP, using the same promoter and terminator, E0034 and E0032 has a very low level of expression. Other promoters and terminators are not tried, this conclusion is only based on the results of this experiment.