This part contains the (+)-limonene synthase 1 coding region of Citrus limon. It is preceded by the yeast consensus sequence for improved expression and carries a C-terminal Strep-tag for purification or detection by westernblot. It is an improved version of BBa_I742111. Also see the experience pages of BBa_I742111 and BBa_K118025. 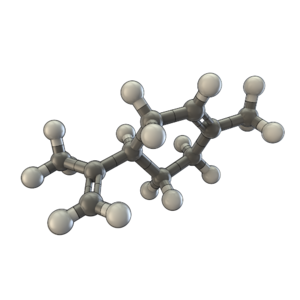 Limonene is a cyclic terpene and a major constituent of several citrus oils (orange, lemon, mandarin, lime and grapefruit). It is a chiral liquid with the molecular mass of 136.24 g/mol. The (R)-enantiomer smells like oranges and is content of many fruits, while the (S)-enantionmer has a piney odor [Fietzek et al., 2001]. Therefore d-limonene ((+)-limonene, (R)-enantiomer) is used as a component of flavorings and fragrances.

Saccharomyces cerevisiae produces geranyl pyrophosphate via the mevalonate pathway (see Fig. 2) where it occurs exclusively as an intermediate of farnesyl pyrophosphate (FPP) synthesis [Oswald et al., 2007]. It has been established that S. cerevisiae has enough free GPP to be used by exogenous monoterpene synthases to produce monoterpenes under laboratory and vinification conditions [Herrero et al., 2008, Oswald et al., 2007].

The molecular and physiological effects of limonene

Because of its pleasant Citrus flavour and very low toxicity (oral LD50 for mice = 5.6 and 6.6 g/kg body weight), d-limonene is widely used as a flavor and fragrance additive. Therefore it is listed in the Code of Federal Regulations as generally recognized as safe (GRAS) [FDA] for a flavoring agent and can be found in common food items such as fruit juices, soft drinks, baked goods, ice cream, and pudding in typical concentrations of 50 ppm till 2,500 ppm, respectively [Sun, 2007]. Hence the normal daily consume of d-limonene is 0,27 mg/kg body weight per day [Watzl, 2002]. As natural compound of plants limonene has practical advantages with regard to availability, suitability for oral apllication, regulatory approval and mechanisms of action and does not pose a mutagenic, carcinogenic, or nephrotoxic risk to humans [Sun, 2007].

Furthermore it is used as excellent solvent of cholesterol, therefore d-limonene has been used clinically to dissolve cholesterol-containing gallstones [Sun, 2007]. A study with 200 patients reported a direct infusion of 20-30 ml D-limonene (97% solution) completely or partially dissolved gallstones in 141 patients. Stones completely dissolved in 96 cases (48%); partial dissolution was observed in 29 cases (14.5%); and in 16 cases (8%) complete dissolution was achieved with the inclusion of hexamethaphosphate (HMP), a chelating agent that can dissolve bilirubin calcium stones [Igimi et al., 1991]. Because of its gastric acid neutralizing effect and its support of normal peristalsis, it also has been used for relief of heartburn [Sun, 2007].

Characterization of this part was carried out using the expression vector BBa_K801004 for transient transfection with the yeast strain INVSc1. 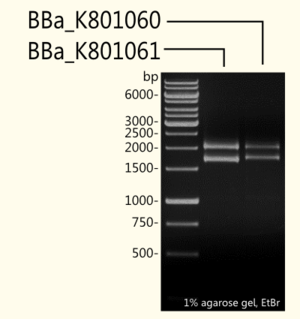 We wanted to analyze (+)-Limonene synthase 1 expression in yeast depending on existence of a consensus sequence. For further experiments ligation and cloning of (+)-Limonene synthase 1 in a new yeast expression vector pTUM100 for protein expression in yeast and in pSB1C3 for submissions for iGEM competition were made. To check success of ligation, double-stranded DNA fragments were separated by length via agarose gel-electrophoresis using ethidium bromide as a nucleic acid stain.


Investigation of the yeast consensus sequence 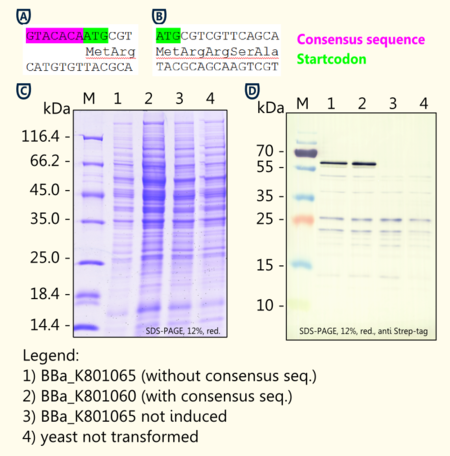 Fig. 4: Comparison of limonene synthase biobricks (BBa_K801065 and BBa_K801060) with and without yeast consensus sequence.

We have not been able to show significant differences in expression between the two biobricks [BBa_K801065 and BBa_K801060] via coomassie staining and western blot. The difficulties of showing the difference via SDS-page may result from variations in the amount of protein applied.

Our in vivo analysis indicates that the consensus sequence does lead to a 2-3-fold enhanced expression in yeast, though (see Fig. 6B). This is consistent with findings of others [pYES2 manual]. 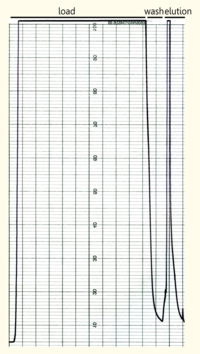 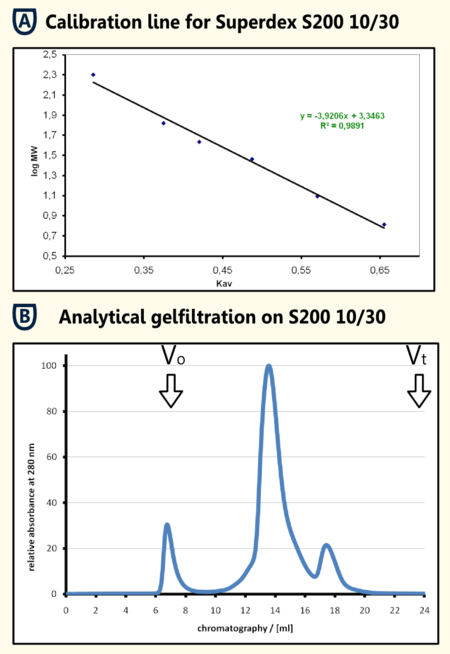 Streptavidin affinity chromatography
The yeast cell extract that was obtained by cell lyse using glass beads of 0,5mm was centrifuged at 11000 RPM in a SLA-3000 rotor for 60 minutes and subsequently dialysed against 5 liters of 1x Streptavidin Affinity buffer (SA-buffer)over night. The cell extract was then filtrated using a syringe filter with a pore size of 0.45μm and susequently applied on a SA-column. After the sample was applied the column was washed using 1xSA buffer until a base line was reached and then the bound protein was eluted using 5mM Biotin in 1x SA buffer. The chromatogramm of the purification is shown on the left side.

Gelfiltration of the SA purified protein The protein sample that was eluted from the SA-column was concentrated using a centrifugation concentrator with a molecular size limit of 30 kDA and filtrated afterwards. From this solution 250μl were applied on a analytical gel filtration colum Superdex 200 10/30 with BSA as running buffer at a flow rate of 0.5 ml/min. In the chromatogramm (shown in the figure on the right in section B)there is a aggregation peak that may be caused by the preceding concentration at the exclusion limit and a major peak at an elution volume of 13.580 ml. The calibration line that was obtained from the calibration proteins b-amylase, alcohol dehydrogenase, BSA, Obalbumine, carboanhydrase, cytochrome C and Aprotinin filtrated with the same experimental setup resulted in a regression line with the formula y = -39206 x + 3.3463. When calculating from the elution volume of the limonene synthase a apparent molecular mass of 70.1 kDa could be determinded. This fits quite well the theoretical molecular mass that was calculated using ExPASy ProtParam to be 65977.1 Da. The four killo daltons difference could also be caused by posttranslational modifications which should be tested using mass spectromety.

In vitro detection of limonene 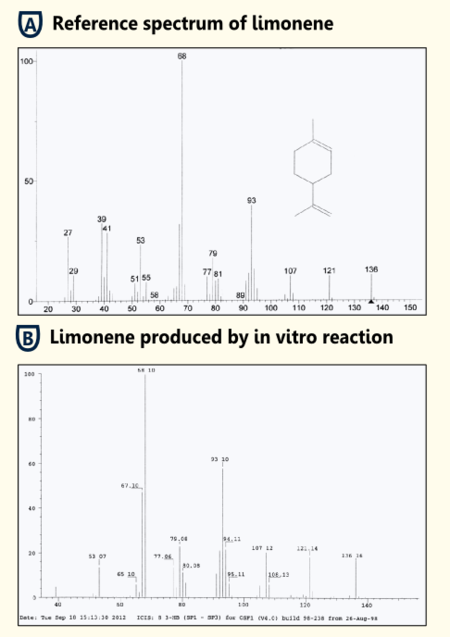 Fig. 7: Spectrum of in vitro detection of limonene (enzyme assay with BBa_K801060) and reference spectrum.

To test the functionality of purified limonene synthase in vitro, we used an optimized protocol of an enzyme assay with extraction of [Landmann et al, 2007]. The limonene synthase was purified via Strep-tag. The enzyme assay was carried out in 25 mM Tris-HCl buffer with 5% Glycerol, 1mM DTT and cofactors (10 mM MgCl2, 1 mg/ml BSA). 50 µM substrate (geranyl pyrophosphate) and 10 ng purified recombinant limonene synthase were added to the reaction batch. Negative controls were reaction batches without enzyme. The reaction was incubated for 15 min at room temperature. Afterwards limonene was extracted with pentane, dried with sodiumsulfate and reduced under a stream of nitrogen. Three replicates of both sample and negative control were done.


In vivo detection of limonene 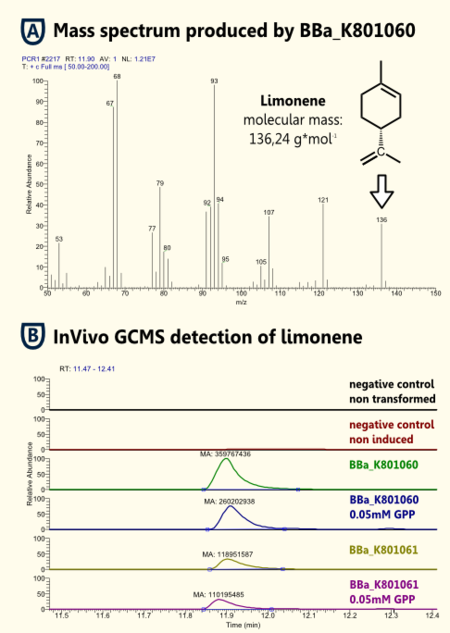 Fig. 8: Detection of limonene in headspace above cell culture supernatant. [A] Spectrum of limonene obtained when analyzing cell culture that was transformed with pTUM104 containing construct of BBa_K801060. [B] Overview about different measurements.

Because limonene is a VOC (volatile organic compound) [Pierucci et al., 2005], we expected an arbitrarily amount of limonene in the gaseous phase above the cell culture supernatant as in the cell culture. Therefore, we measured limonene via headspace (SPME needle) GC-MS.

We showed limonene to be produced by the yeasts that were transformed with pTUM104 carrying limonene synthase coding regions (see BBa_K801061 and BBa_K801060).

Furthermore, we could not detect a significant difference between samples that had additional GPP (educt) versus the ones that did not. This might be due to the inability of GPP to diffuse into the cells (hydrophilic character). Since we were able to detect limonene in both samples, it implies that the GPP present in the cells is sufficient for limonene production. This is consistent with the findings of [Herrero et al., 2008] that showed that S. cerevisiae cells (from laboratory and wine strains) contain enough free GPP to be catalytically transformed by monoterpene synthases into monoterpenes.


Detection of limonene in beer 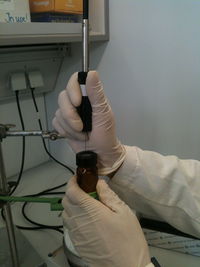 Fig. 9: Preparation of sample for GC-MS with SPME. 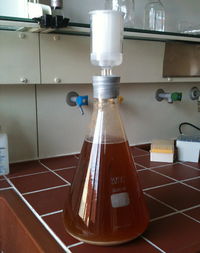 A first attempt to use our genetically engineered yeasts to brew a SynBio Beer were conducted using a transient transfection with a constitutive promoter. The drawback is that in the gyle the selection pressure is not preserved and the loss of the plasmid is possible.


Three liters of gyle were inoculated with 100ml of a stationary yeast culture grown in YPD that was transiently transfected with a plasmid harboring a constitutive expression cassette for the limonene synthase.

We analyzed this first beer for limonene content via headspace (SPME needle) GC-MS. Unfortunately we could not yet proof a significant difference between the beer containing limonene and the negative control beer. This might be due to a loss of the plasmid which encodes limonene synthase. We will try to integrate the limonene synthase expression cassette into the genome of yeast and afterwards we will repeat the experiment.

To establish whether limonene has an effect on yeast cells , we inoculated three different yeast strains with different concentrations of limonene. Limonene was added to the medium and the used yeast strains were the laboratory strain INVSc1, a strain which is used for brewing beer and a strain which can be purchased in a supermarket.

Limonene at high concentrations affects the growth of yeast cells. We could show an inhibition of growth at 1 mM and even a lethal effect at 100 mM. At lower concentrations (1 µM, 10 µM, 100 µM) no inhibition could be observed. The growth rates of yeast cells which were incubated with low concentrations of limonene do not show a difference compared to the negative control (incubation of analogous yeast strains with YPD without limonene).