The parts were assembled using Golden Gate Assembly and the assembly was tested in a binary plasmid vector backbone prior that can replicated in the shuttle chassis Agrobacterium tumefaciens that transfers the part to plant cells on a T-DNA. For submission to the registry the part was converted to a standard BioBrick by using the Mo-Flipper BBa_K1467400 (complete transcriptional unit flipper) made by the NRP-UEA 2014 team.

Functional characterisation in the model plant Nicotiana benthamiana (Figure 1) indicates that the chloroplast transit peptide is functional and is able to direct the enzyme to the chloroplast where starch is produced. 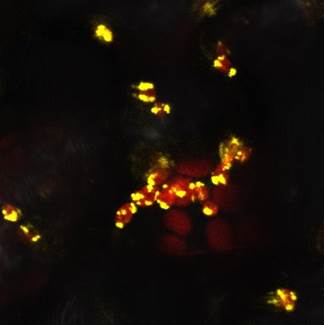 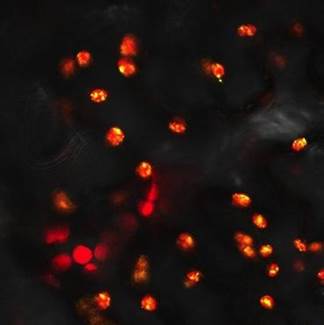 Figure 1: Constructs BBa_K1618031 contains a fluorescent protein, as well as a chloroplast transit peptide. This is a confocal microscopy image of the construct infiltrated into Nicotiana benthamiana, in which the red structures are the chlorophyll within the chloroplast, and the yellow is the fluorescent fusion protein expressed from the construct.

The results above indicate that our expression construct is functional in confirming the localisation of our part into the chloroplast.