This part is a "GoldenGate Flipper" that can be used to assemble complete transcriptional units from GoldenGate MoClo Standard Parts producing a standard BioBrick. It consists of the RFP reporter (from BBa_J04450) flanked by an inverted pair of BsaI recognition sequences. The image below shows the sequences inserted (in orange) between the RFP and the BioBrick prefix and suffix that enable the flipper to accept the parallel assembly of multiple MoClo parts in a one-step digestion-ligation Golden Gate cloning reaction.

The colonies containing the RFP part are clearly red in color under natural light after about 18 hours. Smaller colonies are visibly red under UV. The RFP part does not contain a degradation tag and the RBS is strong. When the flipper reaction is successful the colonies become white as the RFP sequence is replaced by the new part. No part of the BsaI recognition sequence will remain between the BioBrick suffix and the new part.

At NRP-UEA we aim to produce a prebiotic of acylated/butrylated starch in plants. To do this, we had to infiltrate our constructs into plants. It was for this reason, along with the fact that we have a range of expertise on site, that we decided to work with GoldenGate cloning. The problem this posed, however, was when we wanted to send our constructs to the iGEM registry at the end of the project, they would be in the wrong backbone and not following the iGEM requirements. For all of our composite parts, we used the GoldenGate Module Flipper to easily convert our constructs into BioBrick compatible composite constructs.

We assembled parts into the MoCloFlipper pSB1C3 according to the GoldenGate one-step Digestion-Ligation. Putative clones were miniprepped and screened by digestion with NotI (Figure 1) and also with Ecor1/PstI(Figure 2) to confirm that cloning was successful and that our constructs had no internal BioBrick restriction sites.

These results indicate that the Golden Gate Module flipper was successful in converting our constructs into a BioBrick compatible composite part, ready to be shipped for the iGEM registry.

Summary: We improved this part by substituting the LacI-regulated promoter with a strong constitutive promoter (BBa_J23100). We also exchanged the RBS for a stronger one, and codon optimized the part for use in E. coli. These changes were aimed to reduce the incubation time required for red colonies to become visible under normal light.

Documentation: iGEM Calgary used the improved version of this part to convert pSB1A3 to our Golden Gate destination vector.

We determined the average percentage of successful assembly for our improved part BBa_K3114015 as well as the original BBa_K1467400 based on the proportion of white colonies following transformation of Golden Gate assembly samples. Colonies will only become white in appearance (rather than red) if the insert DNA has replaced the RFP coding device between the BsaI sites, and has been assembled in the correct order to allow for successful ligation.

Golden Gate assembly reactions were set up to each contain the same amount of destination vector and required DNA inserts in the form of PCR products. A 1:1 insert:destination vector ratio was used in each reaction. They were conducted as per our Golden Gate assembly protocol. As per the overhang/fusion site sequences associated with the BsaI restriction sites in BBa_K3114015 and BBa_K1467400, they were used in four-insert assembly reactions using parts:

The Golden Gate assembly products were transformed into E. coli DH5-alpha. Some colonies became visibly red under normal light after 12 hours for the improved part (BBa_K3114015), and after 18 hours for the original part (BBa_K1467400) as well as the other RFP device Golden Gate flipper (BBa_K1467200). This indicates that the improvement was successful. We also gathered data pertaining to assembly reaction efficiency by counting the number of red versus white colonies for each of the replicates 24 hours after transformation. The results suggest that using the improved RFP flipper (BBa_K3114015) resulted in a higher percentage of successful assembly reactions compared to the original RFP flipper (BBa_K1467400). However, the mechanism behind this is unclear. 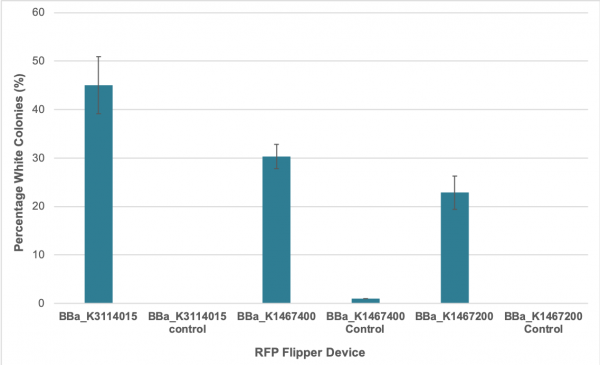 Figure 1. Percent of colonies that are white in appearance 24 hours after transformation for Golden Gate assembly reactions using pSB1A3-BBa_K1467400, pSB1A3-BBa_K3114015, and pSB1A3-BBa_K1467200 as destination vectors. Control reactions were conducted by adding all reagents to the Golden Gate reaction except the DNA inserts. Values represent the mean for three replicates. Error bars indicate standard error of the mean (SEM).