Functional characterisation in the model plant Nicotiana benthamiana (Figure 1) indicates that the chloroplast transit peptide is functional and is able to direct the enzyme to the chloroplast where starch is produced. 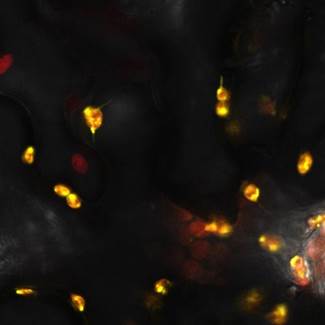 Figure 1: Constructs BBa_K1618029 contains a fluorescent reporter, as well as a chloroplast transit peptide. This is a confocal microscopy image of the construct infiltrated into Nicotiana benthamiana, in which the red structures are the chlorophyll within the chloroplast, and the yellow is the fluorescent fusion protein expressed from the construct.

The results above indicate that our expression construct is functional in confirming the localisation of our part into the chloroplast.