This protein is designed to be a dark quencher for GFP (E0040) in a FRET system. When used in a fusion protein with GFP it reduces the observed fluorescence of GFP drastically. In the biobrick K1319014 this is realized and the proteins are fused with the linker K1319016 which includes a specific TEV protease (available as K1319004) cleavage site. The fusion of the proteins brings GFP and REACh2 in proximity to each other which allows GFP and REACh2 to act as donors and acceptors in a FRET (Förster Energy Transfer System) system. GFPs emission energy is thereby taken up by REACh2 and released as thermal energy instead of visible light. This eliminates the GFP fluorescence and allows a release of a strong fluorescence signal if a TEV protease is expressed and the linker is cut. The cutting separates GFP and REACh2 cancelling the FRET interaction and providing a GFP fluorescence response.

In order to characterize K1319002 it was expressed as a fusion protein together with GFP to show its quenching ability. This fusion protein, produced by K1319014, was located on the plasmid backbone pSB3K3. To show that the reduced fluorescence was due to the quenching ability of K1319002 and not based on a faulty expression, K1319008 was also introduced into the cells on a pSB1C3 backbone to allow for a double plasmid system. Both constructs were put into E. coli BL21 (DE3) and compared to I20260 and B0015. B0015 was used as a negative control and I20260 was chosen as a positive control due to the expressed GFP being identical to the GFP being expressed in the fusion protein of K1319014 and having the same promoter, RBS, Terminator and plasmid backbone.

The double plasmid system, B0015 and I20260 were measured in biological triplicates and after 2 h one set of triplicates of each of the three systems were induced with 50 µl 100mM IPTG in their 50 ml culture (500 ml shake flasks). Fluorescence measurement was performed with the Synergy Mx from BioTek with an excitation wavelength of 496 ± 9 nm and emission wavelength of 516 ± 9 nm. The following graph shows the resulting fluorescence adjusted for the measured optical density to account for difference in growth of the cultures and to only show the fluorescence per cell.

The strong fluorescence response (10-fold increase) after induction with IPTG shows the functionality of GFP inside the fusion protein. After the induction a TEV protease is produced which is specifically cutting the recognition sequence build inside the linker (K1319016) between GFP and K1319002. The cutting results in a separation of GFP and REACh2 resulting in a collapse of the FRET system between the two. This results in a fluorescence signal of GFP due to the fact that the emission is no longer absorbed by REACh2 and emitted as heat but rather as fluorescence with a wavelength of 511 nm. The overall fluorescence of the double plasmid system reaches the fluorescence level of the positive control indicating a total clavage of all fusion proteins by the produced TEV protease.

To eliminate the effect of the leakiness of the K1319008 construct in determining the quenching ability of K1319002, K1319014 was also compared against I20260 and B0015 on its own under the same condition as above (again in a biological triplicate).

This experiments shows that the fluorescence of the fusion protein GFP-REACh2 is nearly 25-fold lower than normal GFP expression under identical circumstances (same backbone, promoter, RBS, terminator and cultivation circumstances). This demonstrates a quenching percentage of GFP of ~96 %!

The PCR clearly shows that the used plasmid had the correct insert. After a positive identification of K1319014 the double plasmid system was also checked for the correct TEV protease plasmid K1319008.

This PCR also positively identified K1319008. Additionally both parts were sequenced. The sequencing data for K1319008 and K1319014 can be found in the parts registry.

characterization of K1319001 with the iGEM Team Aachen 2D Biosensor

To further characterize the REACh construct, they were introduced into the sensor cells which were then induced with 2 µL IPTG with a concentration of 100 mM. Subsequently, we took fluorescence measurement read-outs (GFP, excitation 496 ± 9 nm, emission 516 ± 9 nm) roughly every 10 min in the plate reader. The results were plotted in the heatmap shown on the left.

Group: Oxford iGEM 2017 Author: noahsprent Summary: We improved the characterisation of this part, by demonstrating in our part (BBa_K2450501) that:

Results: We ran both end-point analysis and time-course to see the effectiveness of relief and the dynamics of the reaction. 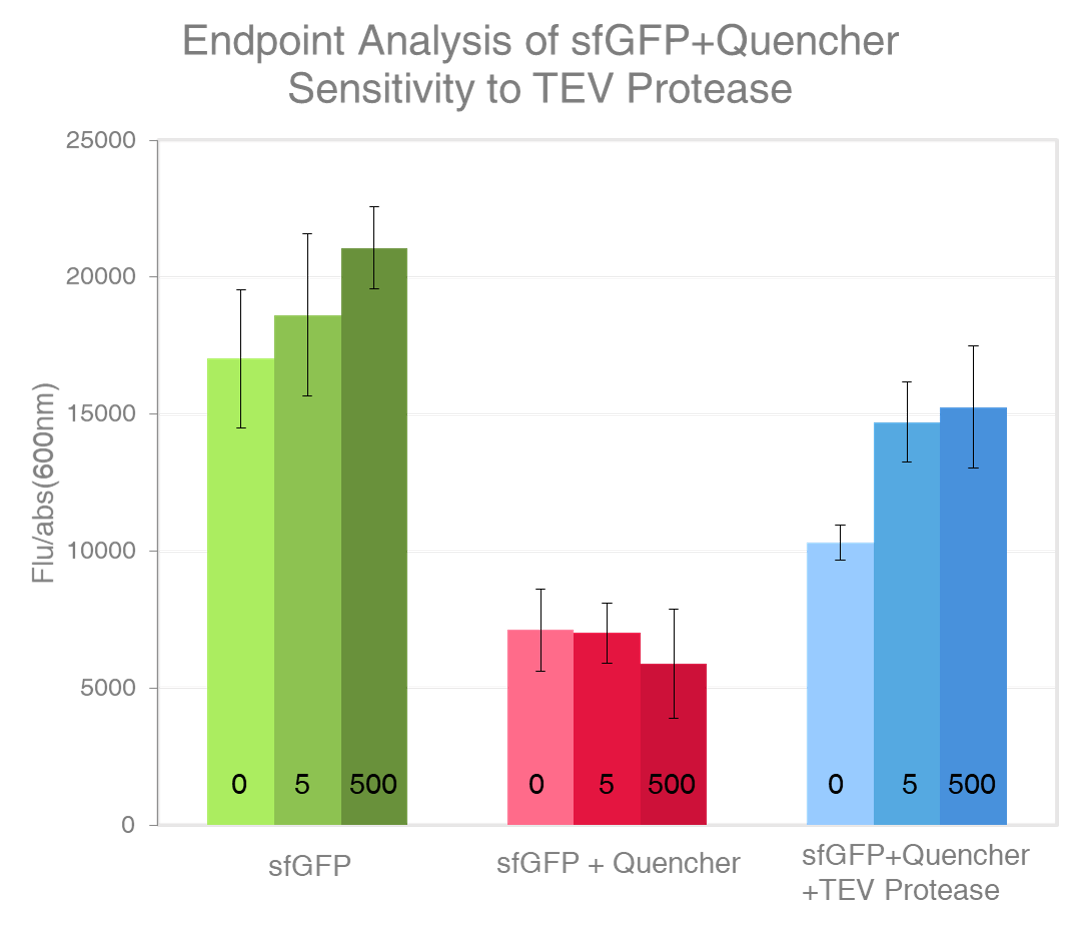 End-point analysis of induction and cleavage. Cells were grown overnight in M9 media and subcultured down before being induced with arabinose at 0.1% w/v and IPTG. They were then allowed to run in a BMG CLARIOSTAR platereader for 10 hours. Three biological and technical repeats were averaged and the SEM used to make the error bars. 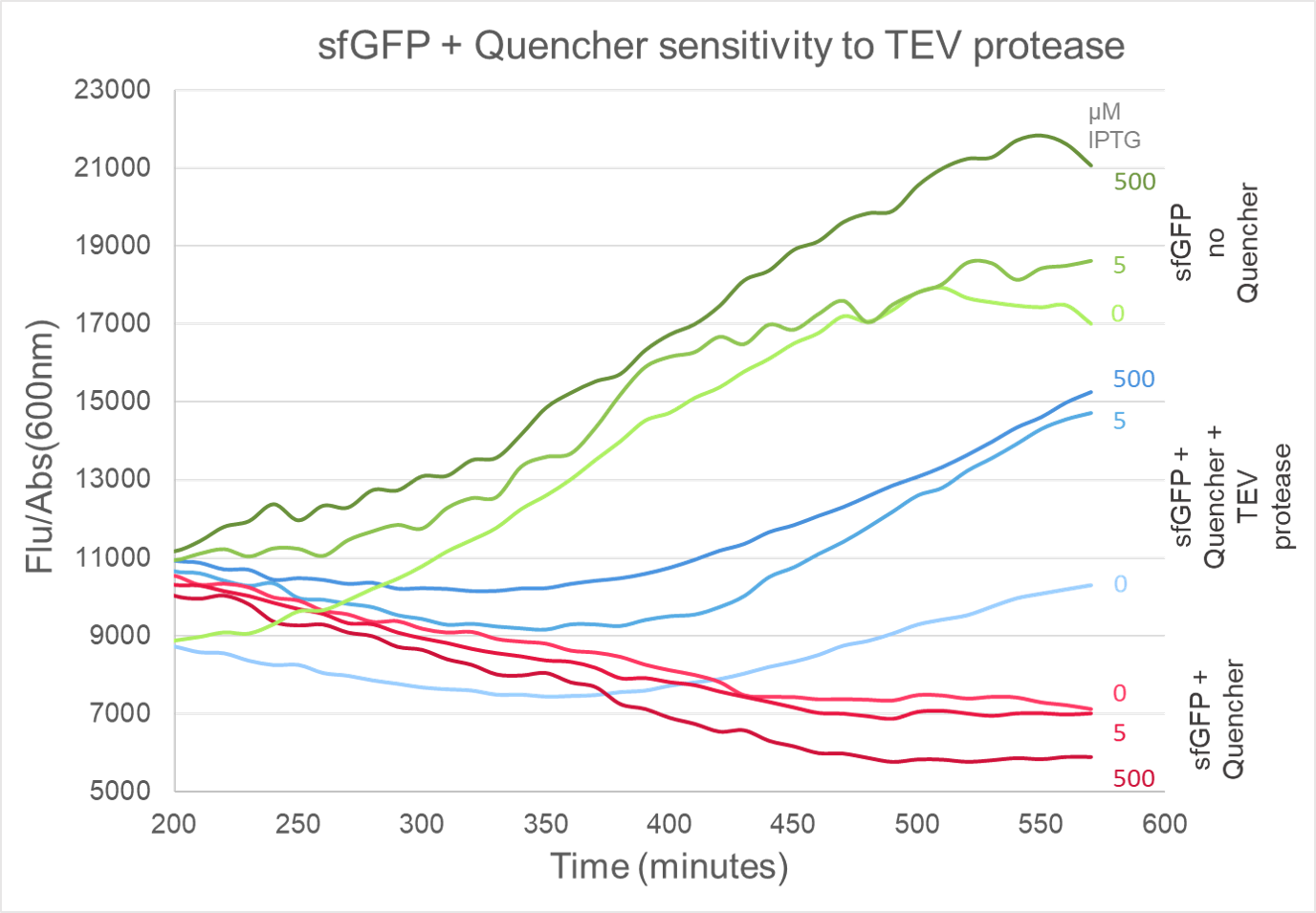 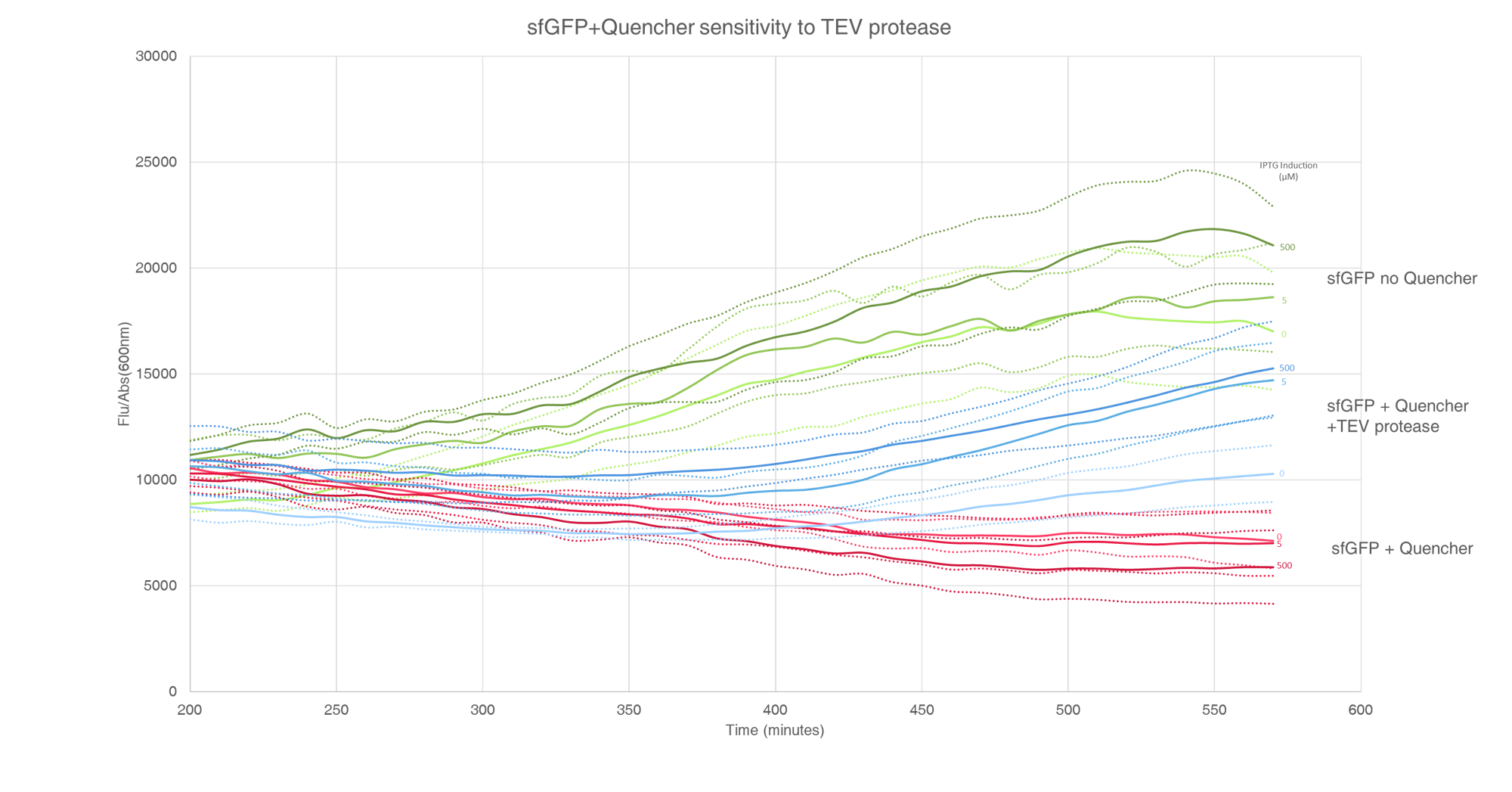 Figure 3: Graph showing the time-course of induction and cleavage. Conditions were the same as for Figure 4, above. The second graph shows error bars in dotted lines above and below each line, in the same colour.

As can be seen from the above graphs, when the plasmid containing our part (BBa_K2450501) (sfGFP with the Reach 2 quencher) was co-transformed with a plasmid containing an IPTG-inducible TEV protease, induction of the protease relieved quenching. Click here to visit the part page and read the characterisation in more detail, or visit our wiki page to learn more about the context of the part.