The chorismate, a metabolic intermediate of the Shikimate pathway present in many plants and bacteria, undergoes at first a reaction of isomerization by the isochorismate synthase PchA. Salicylate is then obtained by the action of PchB, an isochorismate pyruvate lyase. Both enzymes are from the microorganism Pseudomonas aeruginosa [2] . In the final part of the reaction, BSMT1, a methyltransferase, transfers a methyl group from the S-adenosyl-L-methionine, synthesized by the SAM synthetase (in E. coli there's already a basal expression of the enzyme) [3] . 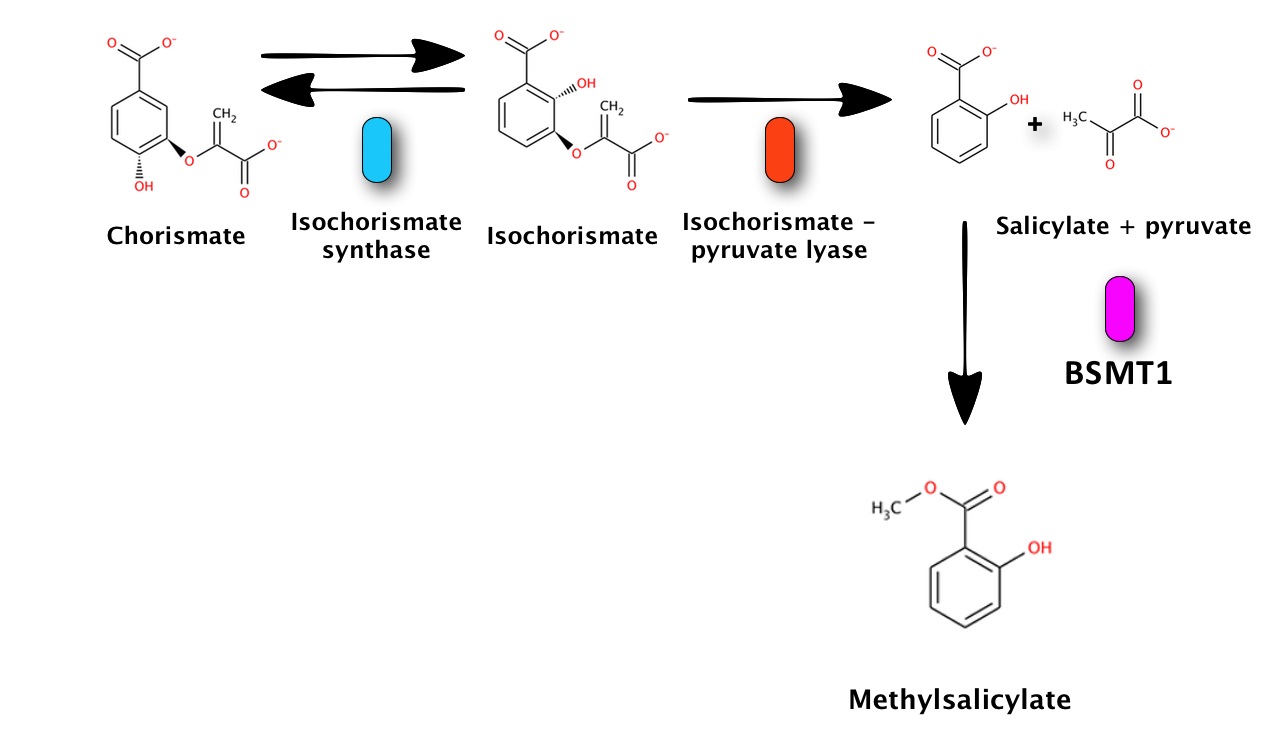 MeSA is an highly volatile liquid with a distinct minty fragrance. We exploited the physical properties of MeSA to quantify its production by gas chromatography using a Finnigan Trace GC ULTRA connected to a flame ionization detector (FID). This kind of instrument, is able to detect ions formed during combustion in a hydrogen flame. The generation of these ions is proportional to MeSA concentration in the sample stream. A calibration curve was initially created using samples with a well known pure MeSA concentration (0 mM, 0.2 mM, 0.5 mM, 1.0 mM, 2 mM).

NEB10β cells transformed with BBa_K1065102 were grown in M9 medium, induced with 5 mM arabinose and in some cases supplemented with salicylic acid. All the gas chromatography measures here reported were done in liquid phase, by injecting 1 ul of pre-filtered culture in the instrument. Figure 1: induced sample produces MeSA. A culture of cells transformed with BBa_K1065102 was grown until O.D. 0.6 was reached. The culture was then splitted in 2 samples and one was induced with 5 mM arabinose. 2 mM salycilic acid was added to these samples. After about 4 h the samples were connected to the Gas Chromatograph. The induced sample (blue trace) shows the characteristic peak of methyl salicylate, as opposed to non induced cells (red trace). Figure 2: Left panel: calibration curve obtained with different concentrations of pure MeSA in ethanol. Right panel: Quantification of MeSA by GC-FID. NEB10β cells transformed with BBa_K1065102 supplemented with salycilic acid produce around 0.4 mM of MeSA. Non transformed cells and non induced cells did not produce any MeSA. Cells induced with arabinose and not supplemented with salycilic acid did not show any significant MeSA concentration (data not shown).

NEB10β cells transformed with Bba_K1065102, were grown in M9 medium, induced with 5 mM arabinose and in some cases supplemented with 2mM of salicylic acid. After 4 hours we performed the gas chromatographyc analyis with a column optimized for the fast analysis of volatile compounds (J&W GC Column Performance Summary-Agilent Tecnologies). Peak corresponding to MeSA eluted at a ritension time of 5.5 min. The quantitative analysis done by integration of the peak area showed that small amounts of MeSA are released in the gas phase under this experimental condition: 1.3 ppm for BBa_K1065102. Non induced cells did not produce any MeSA.

Our MeSA device BBa_K1065102 was able to produce a significant concentration of MeSA only in the presence of salycilic acid. This finding was also previously observed by the MIT team in 2006 with their device (BBa_J45700). Additionally, it seems that more MeSA is present in the liquid phase than in the gas phase.
After we received the DNA sequencing results of the MIT part (BBa_J45300) and of our complete device (built with MIT parts) we realised that the pLAC promoter was missing the -35 box, thus generating a less strong promoter. We believe that this problem can significantly affect the correct functioning of the device. We are now in the process of improving this part by mutagenesis to rebuild a full functional pLAC promoter.