This part contains a strong constitutive promoter from Lactobacillus plantarum. A GusA activity of approximately of 1000 MU.

We confirmed the activity using mCherry as signalling protein. Simultaneously, we compared it to 7 other promotors. Five of those we added to the registry and where published by Rud et al 2006. Two were published by Team Austin, Texas, 2017. We showed that the strength exceeds most other promotors by a large margin. Even though BBa_K2253000 is described as a “strong” promotor, this novel part BBa K3855000 exceeded it 3-fold.

5ml cultures of the eight different transfected Lactobacillus plantarum NC8, as well as an untransfected control, were incubated at 30°C overnight under anaerobic conditions and constant shaking. On the following day, conditions were changed to aerobic for 3-4 hours. Afterwards, the cell suspensions were diluted to different densities (OD 600 of 2, 1 and 0.1). The measurement was carried out using a Tecan reader. Samples where excited at 587 nm and emission measured at 640 nm. Sterile media was used as a reference. Experiments were carried out in triplets.

We found that the promotor expression is of very high strength. Only P1 was stronger. 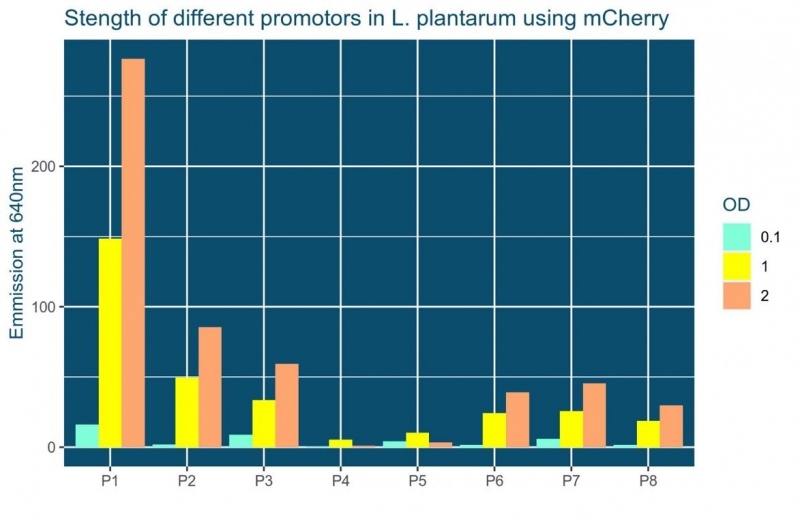 Figure 1. Excitation at OD 2,1 and 0.1 of different mCherry transfected L.plantarum suspensions. Wildtype emission was subtracted. Raw values can be found in our Benchling write up (Cloning, Friday 8.10.2021).