The gRNA is flanked with hammerhead ribozyme on the 5' and HDV ribozyme on the 3' (RGR), the system will undergo self-catalyzed cleavage after translation to generate the mature gRNA structure. This will enable the gRNA to be expressed not only by RNA polymerase III promoter like U6, but also by RNA polymerase II promoter, which means that we could use specific promoters that will be active only in our target cells. [2,3] 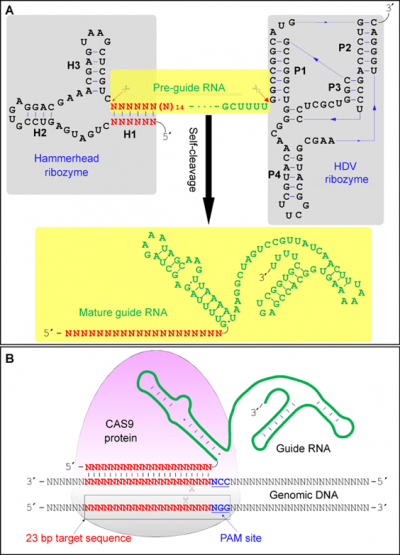 Guide RNA (gRNA) is a hundred base-long molecule, it includes a scaffold sequence which has a unique two dimensional structure necessary for dCas9 binding and a spacer sequence designed to target the synthetic promoter pMLPm. gRNA scaffold sequence for SaCas9 was used.[4]

Deactivated Cas9 (dCas9) attached to transcription factors such as VP64 can be guided to specific location in the genome to induce gene expression.[5]

In order to activate our CRISPR dCas9 VP64 system only in reactive astrocytes and not in the resting cells we used reactive astrocyte specific genes promoters to express the dCas9 VP64 and the gRNA. Since these specific promoters are not snRNA promoters the RGR will enable the gRNA expression. The gRNA-dCas9-VP64 complex will target the pMLPm synthetic promoter and promote the expression of exogenous reverse caspase3 that will lead to apoptotic death. mCherry reporter protein is also expressed by the pMLPm promoter, it is fused to the exogenous reverse caspase3 with Thoseaasigna virus 2A (T2A) peptide that is cleaved during translation.[6]

This part was used and validated by BGU 2018 team in the following constructs:

HEK293 cell line was used in order to examine our engineered system, in which dCas9-VP64-gRNA complex can target and activate the pMLPm promoter and to induce apoptotic death. mCherry is also expressed by pMLPm promoter and can be used as an indicator for the regulatory activity of pMLPm.

Co-transfection was performed on HEK293 cell-line with pSynt-CMV and a lenti-viral-vector: CMV-dCas9-VP64. In this experiment both this part, the gRNA, and the dCas9-VP64 are expressed under the regulation of cytomegalovirus promoter (CMV). The dCas9-VP64-gRNA complex was capable in activating the pMLPm promoter, since mCherry expression was detected in FACS ARIA III (Fig 1), fluorescent microscope (Fig 2), and laser scanning confocal microscope (Fig 3). 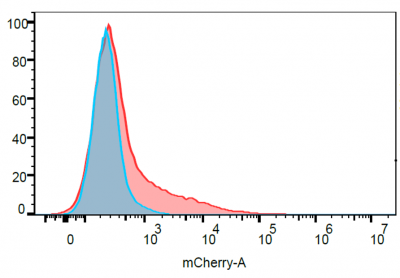 Figure 2: Images of mCherry in HEK293 cells 24 hours post co-transfection with lenti:CMV-dCas9-VP64 and pSynt-CMV. A – bright field. B – Fluorescent microscope.

• In FACS ARIA we were able to see that although we had low transfection efficiency, 23.1% of cells expressed mCherry.

• In fluorescent and confocal microscopes we were able to detect mCherry fluorophore in several cells.

• Although, we do not have a proof of apoptosis, we can see some background red-fluorescence in our images, cells that undergone apoptosis will disperse their expressed mCherry in the media, thus the fluorescence will not be as focused as seen with localized living cells using confocal microscopy, rather there will be a background of red-fluorescence, hence we may cautiously say that some of the cells that have expressed mCherry, have undergone apoptosis as well. This notion will require further validation.

In this experiment we saw that pMLPm can be activated in HEK293 cells by dCas9-VP64-gRNA complex, since we were able to validate mCherry expression in several methods.

In HEK293 cells we did it when both this part, the gRNA, and dCas9-VP64 are expressed by CMV promoter, our next step is to use this part to regulate pMLPm promoter activity in C8D30 cell line when dCas9-VP64-gRNA complex is expressed by A1 reactive astrocyte specific promoters (pTimp1 and pSteap4).

C8-D30 cells were co-transfected with Lenti-viral-vector: pTimp1-dCas9-VP64 and pSynt. dCas9-VP64-gRNA complex target and activate the pMLPm promoter in our design. This activation has driven pMLPm to regulate the expression of exogenous reverse caspase3 fused to mCherry fluorophore by T2A peptide (Fig 4).

Figure 4: Images of mCherry in C8-D30 cells 24 hours post co-transfection with lenti-viral-vector:pTimp1-dCas9-VP64 and pSynt. A – Bright field. B – Fluorescent microscope

mCherry expression in C8-D30 reactive astrocyte cells was visible. Demonstrating the activity of our dCas9 editing approach, that this part has a major role in the complex function, and verifying expression of reverse caspase3. In fluorescent microscope we were able to detect mCherry fluorophore in several cells.

By demonstrating mCherry expression in C8-D30 cell line we were able to demonstrate both the specificity of our chosen promoters (Timp1 and Steap4) as well as the ability of our system to drive the expression of caspase3 (through the mCherry marker) we have designed into our plasmid.