This is a reporter construct of our modular biosensor that includes an E.coli module producing a quorum sensing molecule upon detection of a pollutant and a Shewanella oneidensis mtrb knockout module that receives the quorum sensing molecule, triggering an oscillatory circuit under which electricity production is placed.

In this part, we put GFP production under the oscillatory circuit instead of the mtrb gene so that this part could be expressed and characterized by fluorescence measurements in E.coli rather than by electricity production in Shewanella oneidensis. Thus, it is a simpler version of our final construct that can be used to test whether oscillations actually occur as expected according to numerical models.

This part produces RhlR constitutively, which can induce Prhl in the presence of C4-HSL lactone. With C4-HSL (or due to the leakiness of Prhl), RhlI, AiiA and GFP are produced under Prhl. RhlI produces C4-HSL, which creates a positive feedback loop on the promoter. However, AiiA degrades C4-HSL, which creates a negative feedback loop on Prhl. Thus, GFP expression oscillates and this part can be used as a reporter to check that the expected oscillations appear.

The output of this part was modeled by a system of delayed differential equations (detailed in the model page of our wiki (https://2020.igem.org/Team:Stockholm/Model). The results obtained below show that the oscillations of the system are active from the beginning, but no significant level of MtrB (“X”) is produced. This allows the cells to synchronize as the levels of C4-HSL (“H”) is oscillating from the very start, regardless of 3OC6-HSL (“H2”) signals. When 3OC6-HSL is added to the system, the levels of MtrB oscillates with the rest of the system at much higher levels. For this specific part, similar oscillations should be obtained with GFP replacing mtrb, thus allowing us to easily check by fluorescence measyrements whether the oscillations occur in vivo. 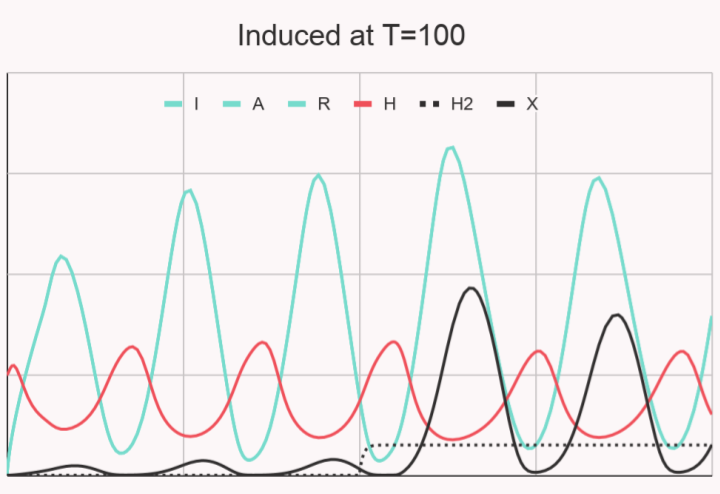