After insertion into a pSB1C3 plasmid and transformation of E. coli TOP10 cells using heat shock, we picked several colonies corresponding to this part and PCR-amplified them using the VR and VF2 primers contained in the plasmid backbone pSB1C3.

We then ran electrophoretic gels at 180V for 30 mins (Figure 1). Ten colonies were picked from the plate and we obtained five bands for which the band height corresponded to the expected length of the construct (2493bp). 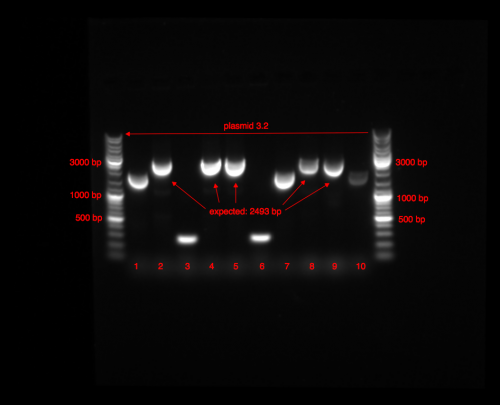 The colonies for which the size seemed correct were sent for sequencing at Microsynth AG. The sequence obtained for colony 4 corresponded to the expected part, but it was not fully sequenced due to the limitations of the Sanger sequencing method.

This construct was further analysed by Western Blot to check whether we obtained protein expression of bphR2 thanks to the added myc-tag (Figure 2). Additionally, 10e-4 M 1,1-biphenyl was added to BBa_K3440018 to compare the differences in protein expression. No bands of the correct size (35.1 kDa) were obtained for BBa_K3440018 in uninduced nor induced conditions, therefore we could not prove that this construct can express bphR2 constitutively.

We checked that a potential toxicity of the plasmid for E .coli was not the reason behind proteins not appearing on the Western Blot by making viability tests (see Figures 3-4 for the layout of controls and the plasmid respectively and Figures 5-6 for the results of controls and the plasmid). We made growth curves by measuring OD600 of E. coli containing the part and different concentrations of pollutants. A control E. coli TOP10 strain was used as a control (Figures 3 and 5) for comparison, as well as another pollutant that should not affect growth (PFOS). It appeared that only the highest concentration, 10e-3M, of 1,1-dibiphenyl retarded the growth of E. coli. We therefore concluded that this was not the reason why the band did not appear on the Western Blot.