This part produces mCherry under prma promoter, which can be activated by PFAS/PFOA. mCherry is a fluorescent reporter gene originally found in Anaplasma marginale [1]. It gives a red color (emission at 615nm) when excited at 560nm. prma promoter is found in Rhodococcus jostii RHA1 [2] and regulates the transcription of prma, a gene that produces propane monoxygenase. In our project, we rely on this promoter for the detection of polyfluoroalkyl substances, a pollutant found in the Baltic Sea. Literature [3] shows that perfuloroalkyl substances activate the prma promoter. In particular, in our final system, prma promoter is activated by perfluorooctanoic acid.

In our project, we use the BBa_K344002 part in order to test the leakiness of prma promoter.

After heat shock transformation of the pSB1C3 plasmid containing the BBa_K3440002, we picked colonies from plates (Figure 1) and PCR amplified them with primers VF and VR2. We ran gels of the product at 180V and for 30 mins (Figure 2). We obtained the expected size for the bands (1361bp) for C1,C2,C3 and C5.

We therefore prepared plasmid preparations and glycerol stocks of those and sent them for sequencing to Microsynth AG. The sequence obtained corresponded to the expected part for C3.

We then proceeded to test the leakiness of prma promoter thanks to the mCherry reporter added in the part. We measured fluorescence intensity (excitation 560nm, emission 615nm) of mCherry for C3 with (1.56 μM) and without PFOA and calibrated the values with OD600 measurements. The obtained results (Figure 3) show, as expected, very low intensity for the uninduced promoter. However, the induced promoter did not seem to give fluorescence. Literature suggests that concentrations of 2mg/L (which is much higher than what the Baltic sea contains) can activate the promoter, which might expalin our results. 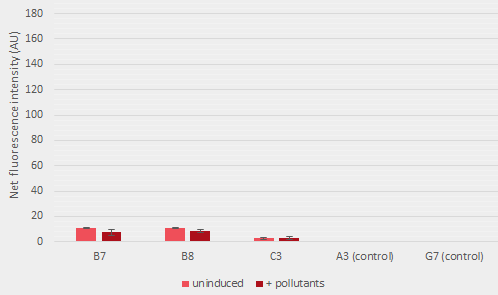