This is a truncated version of the 3-Hydroxy-3-Methyl-Glutaryl-Coenzyme-A-Reductase (HMG-CoA-R) from Saccharomyces cerevisiae. It catalyses the reaction of 3-Hydroxy-3-Methyl-Glutaryle-Coenzyme-A to Mevalonate which occurs in the Mevalonate Pathway to Isopentylpyrophosphate which is the Precurser of all Isoprenoides. The enzyme is naturally a membrane bound enzyme. The membrane anchor is situated N-terminal. This region is also essential for the degradational control of the enzyme. By deleting the N-terminal part to Aminoacid (inclusive) the enzyme is expected to be water soluble and deregulated.

Trunctuation had been done according to the following publication: http://aem.asm.org/content/63/9/3341.short

K A Donald, R Y Hampton and I B Fritz: Effects of overproduction of the catalytic domain of 3-hydroxy-3-methylglutaryl coenzyme A reductase on squalene synthesis in Saccharomyces cerevisiae . Appl. Environ. Microbiol. 1997, 63(9):3341.


HMG1 encodes HMG-CoA reductase and catalyzes conversion of HMG-CoA to mevalonate, which is a rate-limiting step in sterol biosynthesis. Because mevalonate is synthesized, it is easy to flow to subsequent pathways. Therefore,β-carotene production increase. Color of colony was changed yellow from orange when tHMG1 was inserted into S. cerevisiae synthesizing carotenoid.(Fig.2,3,4) This result showed that tHMG1 was inserted.

tHMG1 has a characteristic of changing color of S. cerevisiae. This result to be due to the fact that as a result of massive synthesis of mevalonate, β-carotene was produced in large amount. 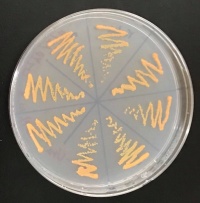 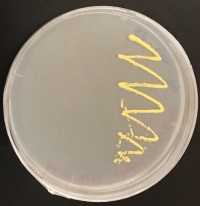 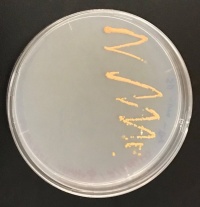 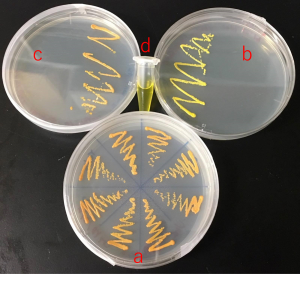 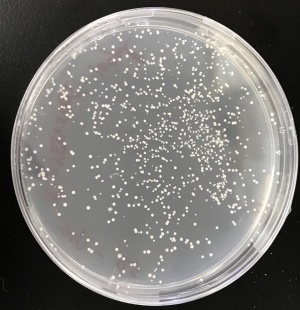 S. cerevisiae transformed was grown onto sd-ura medium. This figure shows that the pYES2 plasmid inserted sod 2 was introduced into S. cerevisiae.