This composite part consist of BBa_K731300 part (lacI-lacIq) and a tac promoter followed by a lac operator in the forward direction. It is a ready to use composite part and it allows the expression of a gene of interest with a strong E.coli promoter and under the control of IPTG. The lac operator decreases basal levels of expression.

This part is in pSB1C3, but it is also available in pSB4K5 upon request. Contact us at igemtrento@gmail.com

LacI gene product is a trascriptional inhibitor inactivated by allolactose, a lactose metabolite. In its active conformation (no allolactose bound) it recognizes and binds lac operator sterically preventing the RNA polymerase binding to the tac promoter and owering constitutive gene expression. In its active conformation (allolactose bound) it releases lac operon, allowing polymerase recognition of Ptac. Protein expression can be induced with isopropyl β-D-1-thiogalactopyranoside (IPTG, an allolactose analogous).

This part allows IPTG-induced gene expression. lac operon and Ptac activity has been measured by placing a GFPmut3b under control of this regolative part and assaying protein level by fluorescence. See BBa_K731520 for sequence details.

This part has been characterized in both pSB4K5 and pSB1C3. 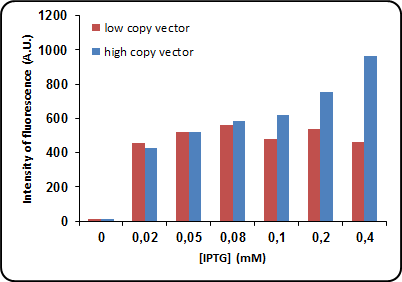 FIGURE 1 Dependence on protein expression of IPTG concentration. NEB10b cells transformed with BBa_K731520 both in low copy (pSB4K5) and high copy (pSB1C3) vectors. Cells were grown in LB at 37°C until OD of 0.6 and induced with different concentrations of IPTG. After 4 hours a 1.5 mL aliquot was taken from each sample. Cells were spun down and resuspended in 1.5 mL of PBS. Fluorescence measurements were taken with a Varian Cary Eclipse Spectrophotometer using an excitation wavelenght of 464 nm. 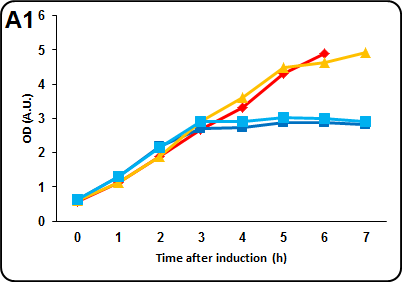 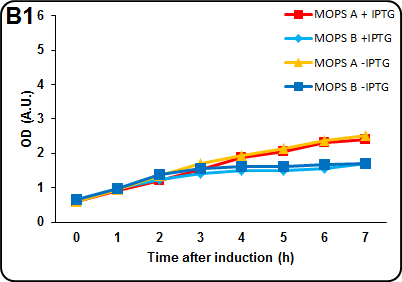 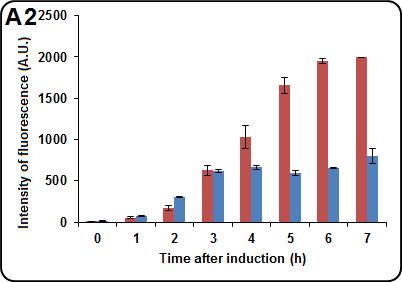 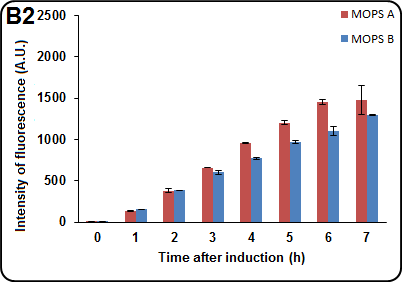 FIGURE 2 Effects of carbon source and induction on protein expression levels. Cells were grown at 37°C in LB until it was reached an OD of 0.4. The cells were at this point spun down and resuspended in an equal volume of MOPS medium and allowed to grow to an OD of 0.6. Prior induction the cells were splitted into two samples of equal volume and one of the two sample was induced with 0.1 mM IPTG. Every hour a 1.5 mL aliquot was taken to measure optical density, pelleted and stored overnight at 4°C. The following day samples were resuspended in 1.5 mL of PBS to measure fluorescence. In case of instrument saturation (A.U. > 1000) the volume of PBS was doubled. The assay was performed in two different MOPS media. MOPS A: 60 mM glycerol ("hot" colours). MOPS B: 30 mM glucose ("cold" colors). The experiment has been performed in triplicate. Panel A1& A2: Optical density at 600nm and intensity of fluorescence in pSB4K5. Please note that last MOPS A peak in this panel is not significative, since the instrument was saturated even at 1:2 diluition. Panel B1 & B2: Optical density at 600nm and intensity of fluorescence in pSB1C3. Fluorescence measurements were taken with a Varian Cary Eclipse Spectrophotometer using an excitation wavelenght of 464 nm. 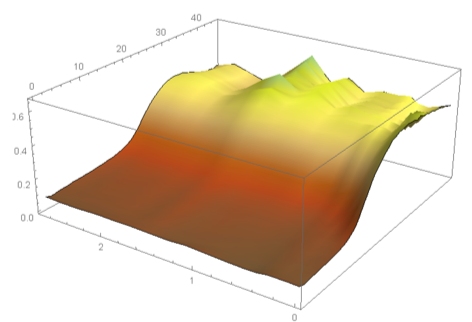 Therefore, we get the conclusion that The result of programming instructs us that when the concentration of IPTG is 0.764906mM, E.coli could produce the largest amount of todD. The graphics of objective function shows that the producing rate of todD would slowing down significantly when time value approaches 50, which is 12.5 hours in the real world. To increase the efficiency of the lab and to save time, 12.5 hours of IPTG induction is enough for the production of todD. The fitting three dimension graphs are shown below, by FIGURE 5&6 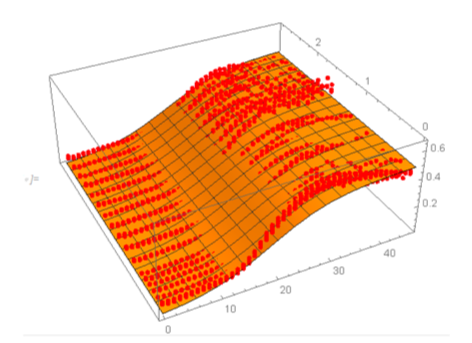