The following table shows the results we obtained from the DNase agar test when promoter is present. The following data is taken from BBa_K729019 which has pT7 promoter. DNase agar contains DNA, which our extracellular nuclease digests. This digestion is observed by adding hydrochloric acid to the agar plates, which causes the remaining DNA to precipitate, causing 'cloudiness' to the DNase agar.

As seen in our DNase agar plate, there is a clear halo surrounding our nuclease transformed cells, indicating a DNA-free zone where the nuclease has digested the DNA in the agar. No such halo is present in our untransformed cells. This indicates that our transformation has been successful, and that BBa_K729004 is working as expected, producing extracellular nuclease that is capable of digesting extracellular genetic material.

We demonstrate the ability of a staphylococcal nuclease modified with the DsbA periplasm export signal (BBa_K729019) to prevent transfer of genetically modified material to a commercially competent TOP10 E. coli strain. This observation is consistent with our proposed function of BBa_K729019 to act as a biosafety mechanism preventing uptake of released DNA by naturally competent bacteria.

After sonication, disruptates were incubated for 10min at room temperature. 5uL of the disruptate was used to transform an aliquot of TOP10 chemically competent cells, following manufacturer instructions. As a control, we also spread 20uL of the disruptate material directly onto LB agar plates with and without 100ug/mL Chloramphenical. No colonies were observed on the control plates for any of the three strains (data not shown), indicating sonication had successfully disrupted all cells. 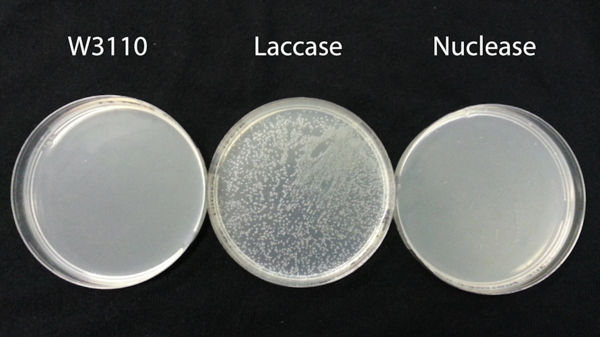 Transformation with disruptate of W3110 harbouring the BBa_K729019 nuclease plasmid yielded no colonies on chloramphenicol plates (Fig 1). BBa_K729019 differs from BBa_K729006 only in that it contains an ORF encoding the periplasmic nuclease instead of laccase. As such, we conclude the periplasmic nuclease has sufficient DNAase activity in the disruptate to reduce the amount of plasmid DNA present to below the threshold capable of transforming TOP10 cells.

We suggest periplasmic nuclease expression provides a promising strategy for preventing transfer of genetically modified DNA. This is particularly valuable for the application of synthetic biology in environmental contexts.

A separate DNase agar assay was also done, in order to determine if there was any correlation between colony size and nuclease production of our nuclease BioBrick (BBa_K729019). DNase agar was plated out with nuclease transformed W3110, at a concentration to produce single colonies on the plates. Colony sizes were measured, as wer the DNA-free zones surrounding the colonies.

We have determined that a linear correlation exists between colony size and halo diameter, hence suggesting that cells produce nuclease even as they grow. 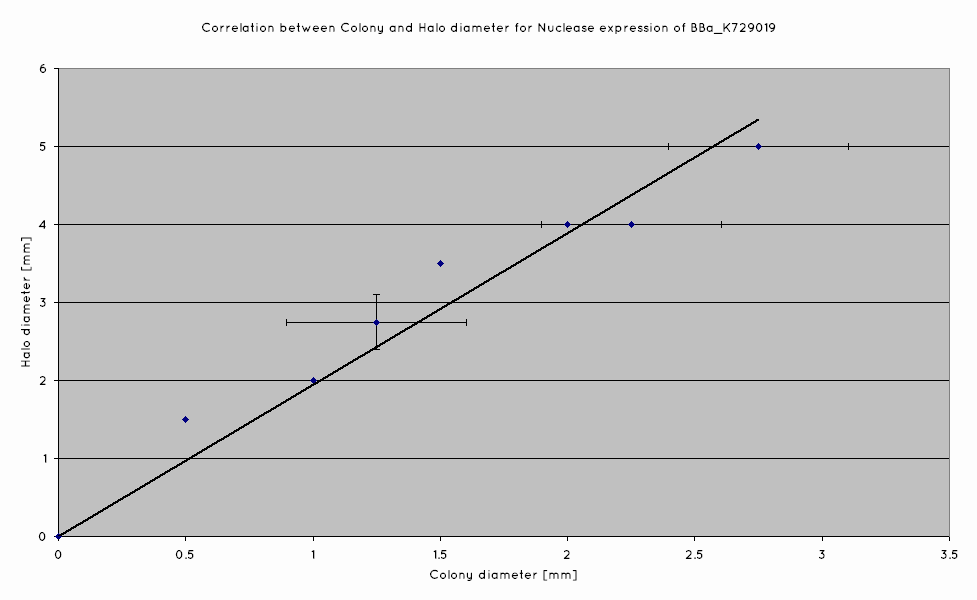 A growth curve assay was done on our nuclease transformed cells in order to determine if there was sufficient intracellular production of nuclease to adversely affect the viability of our cells. The cells were grown in shake flasks, and their optical density at 600nm was measured.

Our results indicate that the nuclease BioBrick does not negatively affect the growth of our cells. The growth rates obtained from our nuclease transformed cells are comparable to those of the untransformed W3110 cell line. 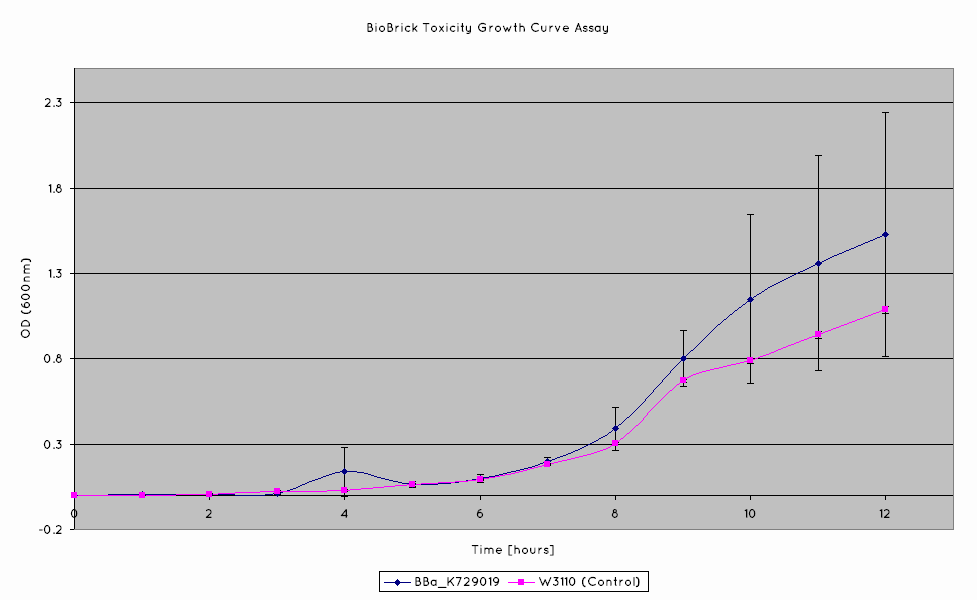