In this part of experiment, we repeated the experiments conducted by Peking_R 2011 team. Characterized the part BBa_k598010. We focused on investigating the following points in our measurement-relevant experiments:

-The cytotoxicity induced by theophylline to DE3 cells.

-The absorbance of our cultured DE3 in different concentrations of theophylline in our experiments.

-The fluorescence intensity measured that indicates the sensitivity of riboswitch to theophylline.

1.The growth curve of DE3 in different concentrations of theophylline.

We used four gradients of TPP (0 mM, 0.1 mM, 1 mM and 10 mM) to test if the addition of TPP may induce cytotoxicity to DE3, and influence the growth of them. Each single colony of the DE3 cells transfected with circularized pSB1A3 were cultured in 100 ul LB-0.1%Amp for 12.5 hours, the OD600 values were measured in each 15 minutes. We chose 12 colonies in this experiment, the cultured time was compared with the average calculated for the 12 colonies’ OD600. The growth curves of DE3 cells is displayed below: 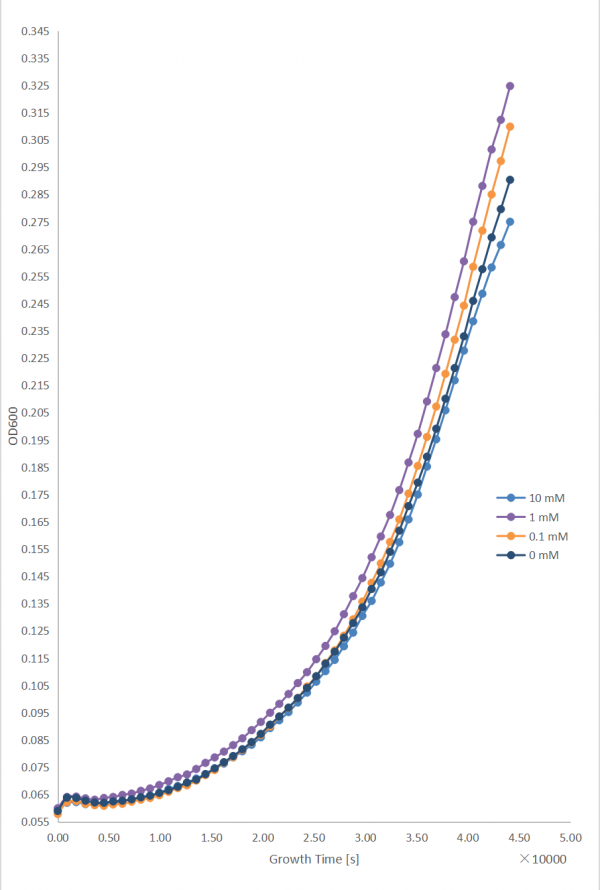 The growth curve indicates that the OD600 measured may be influenced by the concentration of TPP, and the DE3 incubated with 1 mM TPP grows best and the 10 mM TPP may significantly inhibit the growth of DE3 cells. But the difference in OD600 was not that remarkable when the incubating time is limited in 25000 seconds. Thus, we chose to culture the DE3 cells for 6 hours in the following experiments.

2. Measuring the fluorescence intensity of DE3 cells transformed with standards and blank.

We repeated the Peking_R 2011 experiment and adapted their arrangement of TPP gradients (0 mM without arabinose added, 0 mM, 0.1 mM, 0.3 mM, 1 mM, 3 mM, 5 mM, and 10 mM with 1 mM arabinose added). In addition, The absorbance measured was used in normalize the fluorescence intensity measured to minimize the interference caused by bacteria concentration, while the high number of colonies grew in each well may lead a wrong over-high fluorescence result. The absorbance is measured after the GFP fluorescence.

All the procedures were conducted under dark condition in a 96-well plate. The distribution of the colonies cultured is displayed as below: 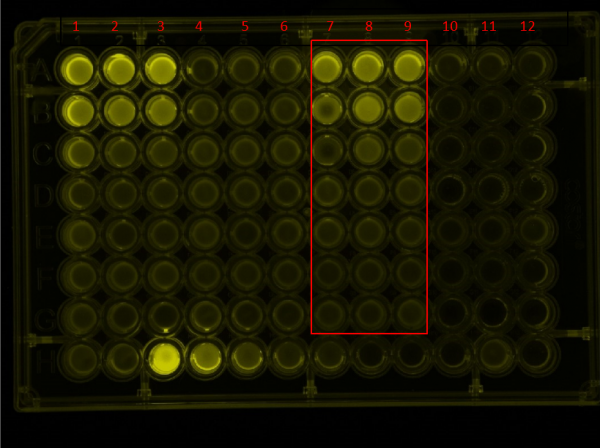 The GFP fluorescence values were measured, the excitation and emission light was 485 nm and 535 nm respectively. To avoid the leakage of fluorescence interfering the reading of other wells, the time interval of measurement was extended to 20 ms. The exact GFP fluorescent intensity of each well is listed below: 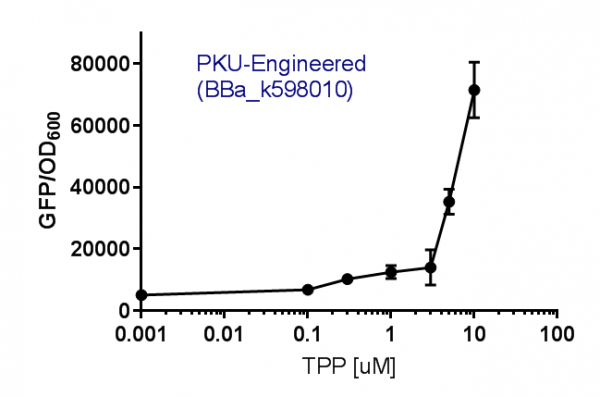 Figure 1: The dose responsive curves that manifesting GFP intensity measured at 535 nm divided by OD600 comparing to the TPP concentration (0 mM, 0.1 mM, 0.3 mM, 1 mM, 3 mM, 5 mM, and 10 mM), the concentration of arabinose in each well was controlled to be 1 mM. It can be shown that the GFP fluorescence intensity increases along with the concentration of TPP as the riboswitch was opened by the TPP. 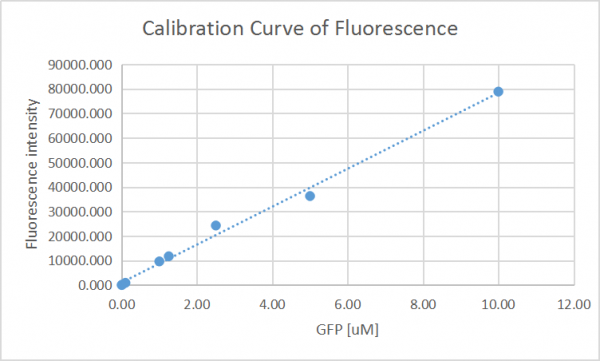 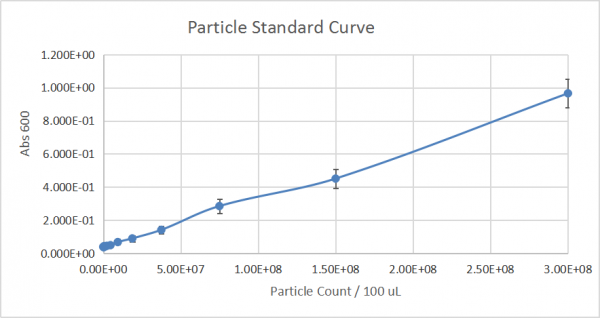 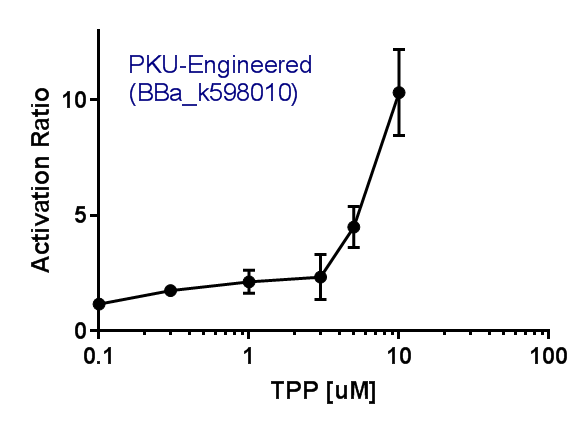 Figure 2: The working curves that indicates the sensitivity of the riboswitch designed to TPP. The activation ratio is fluorescence intensity under given TPP concentrations compared to that of without TPP. The TPP gradients were set as 0 mM, 0.1 mM, 0.3 mM, 1 mM, 3 mM, 5 mM, and 10 mM, the concentration of arabinose in each well was controlled to be 1 mM.

For the full characterisation of the device, please refer to BBa_K598001