This system consists of a positive and a negative feedback loop. The positive feedback loop is initiated when the constitutively expressed luxR forms a complex with AHL- which is produced by the protein LuxI. The complex up-regulates the expression of luxI, GFP and AiiA, at first exponentially increasing LuxI, GFP and AiiA levels because the maturation time of LuxI is shorter than that of AiiA. Then the negative feedback loop gets the upper hand: Once maturated, the enzyme AiiA degrades AHL faster than luxI can produce it. Because GFP is under the control of the same promoter as luxI it is highly expressed until AHL is rapidly being degraded by AiiA. Once the AHL concentration is lowered enough, the expression of GFP is halted. At this point the net change in GFP will thus become negative due to the degradation. Since AiiA expression is initiated by the luxR-AHL complex, the production of AiiA also halts which causes the net change of AiiA to become negative and this eventually causes the concentration of AiiA to become low enough to allow a net production of AHL again. Since AHL is a quorum sensing molecule all cells are synchronised in their oscillatory behavior.

For a detailed explanation about The Synchroscillator click here.

The tunable oscillator was tested in a flow chamber that contained a microdish, which was designed by Team Wageningen UR 2011. Every 10 minutes, a picture was taken with an Olympus fluorescence microscope. The set-up of the flow chamber is explained here. After an overnight incubation in the microdish a series of pictures was taken. This was also done for E. coli transformed with ptet-GFP as a fluorescent negative control for oscillations. Four wells from the microdish were clearly visible and those were analyzed using the program ImageJ. The outcome is presented in the graph below. 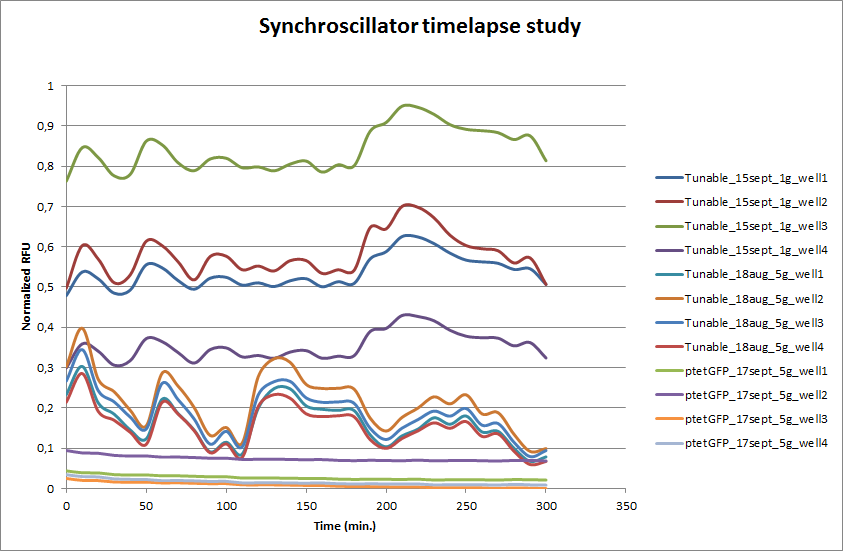 ptet-GFP shows a stable expression over time. This confirms that the differences in fluorescence are not due to fluctuations of the Xenon lamp. The Tunable Oscillator was run on two different dates and each time four wells from the microdish were analyzed with ImageJ. Clearly visible are the large fluctuations in fluorescence, this is the case for both measurement series that were done for the Tunable Oscillator. Especially at the start there seems to be an oscillation that looks stable. Both series seem to have the stable periods, which coincide. After a few hours, however, the oscillation is disrupted and periods are hardly distinguishable.

For an impression of the Synchroscillator in the microdish, see the picture below. For more information about the device and about the circuitry, visit our wiki.

The double tunability of the Synchroscillator was modeled in Matlab. The resulting graphs are depicted below. They show the different behavior of LuxI, AiiA and internal/external AHL concentrations depending on the amount of IPTG and aTc present in the system. 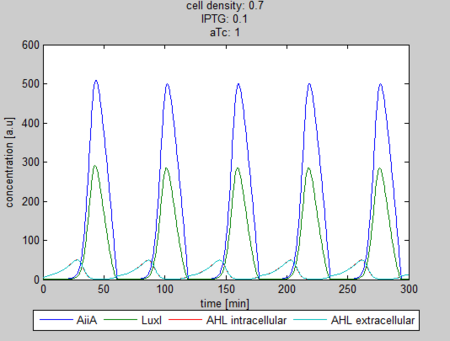 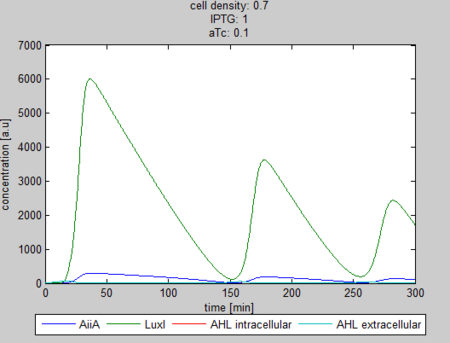 Fig.1 and 2: Different shapes of the oscillations depending on the proportion of IPTG and aTc.

Fig.3: Resulting oscillations when adding the same amount of IPTG and aTc

A number of safety questions regarding the BioBrick system's biological safety and biological security have been answered, you can read specific answers by following the links.