Background and structure of the CAR-MERTK

Previous studies have shown that the MER tyrosine kinase (MERTK) expressed on the cytomembrane of the macrophages can not only mediate the phagocytosis of apoptotic cells and virus particles, but at the same time reduce the secretion of cytokines[1]. Therefore, we designed a chimeric receptor, CAR-MERTK, to redirect macrophage MERTK signaling to engulf viruses while circumventing significant cytokines release. Our CAR-MERTK consists of three domains, an αS-scFv extracellular domain targeting the spike (S) protein of the SARS-CoV-2, a CD8 hinge and transmembrane domain as the scaffold, and an intracellular domain derived from MERTK to acquire the magical function of the MERTK. Also, there is a Myc tag gene making the lentiviral transcription efficiency detectable. 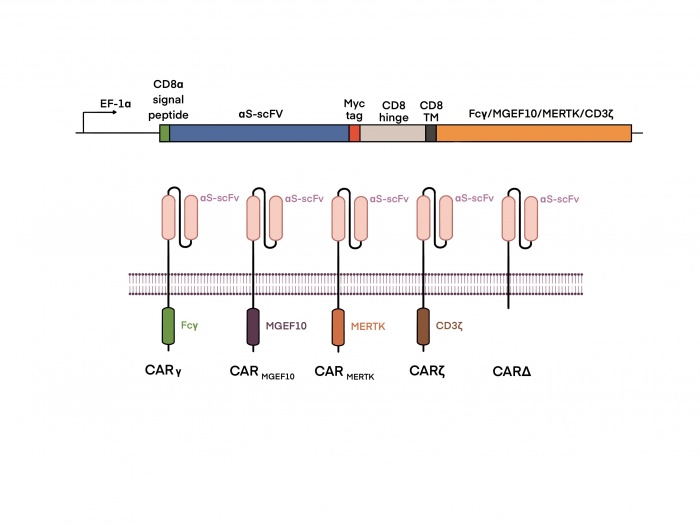 Figure1.Vector maps of tested CAR designs and schematics showing the structures of CARs.

The functions of a receptor depend highly on its structure. Since the CAR-MERTK is adapted from both MERTK and CAR, we hypothesize that the receptor can not only recognize the SARS-CoV-2 in a targeted manner but also engulf the SARS-CoV-2 with low inflammatory factors secretion.

To assay the library of CAR-Ps, previous study has introduced each CAR-P into J774A.1 murine macrophages by lentiviral infection. As an engulfment target, they used 5 mm diameter silica beads coated with a supported lipid bilayer. A His8-tagged extracellular domain of CD19 was bound to a NiNTA-lipid incorporated into the supported lipid bilayers. Macrophages expressing CAR-PBai1, CAR-PMerTK, and the adhesion-only CAR-PGFP did not bind the CD19 beads even though these CAR-Ps are present at the cell surface (Figure 2, 3)[1]. 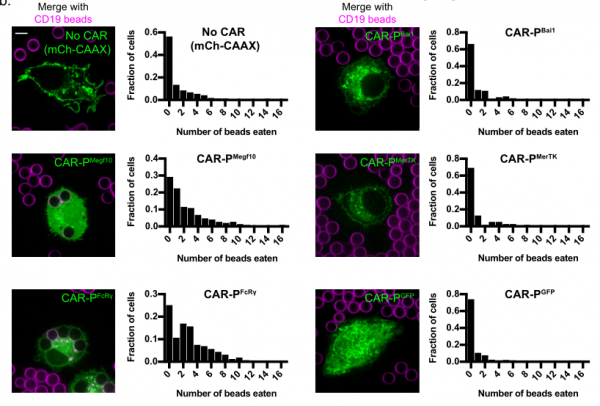 Figure 2. J774A.1 macrophages expressing aCD19 CAR-P with the indicated intracellular signaling domain (green) engulf 5 mm silica beads covered with a supported lipid bilayer containing His-tagged CD19 extracellular domain. The beads were visualized with atto390-labeled lipid incorporated into the supported lipid bilayer (magenta). Cells infected with the cell membrane marker, mCherry-CAAX, were used as a control (no CAR, top left). To the right of each image is a histogram depicting the frequency of cells engulfing the indicated number of beads. 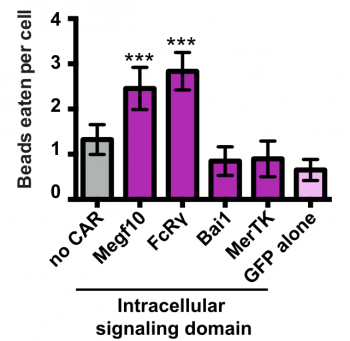 Figure 3. The average number of beads eaten per cell.

Results of our project

1.Validation of the CAR-MERTK expression on the macrophages

We choose the lentiviral technology to transfect CAR-MERTK to human macrophages THP-1 cells. The CAR-MERTK gene was inserted to a third-generation lentiviral vector in which the CMV promotor was replaced by the EF-1α promoter to enhance the expression efficiency. We next used flow cytometry to confirm the expression of the CAR-MERTK on the macrophages by detecting the Myc tag. The results showed that the lentiviral vector transfected THP-1 cells with high efficiency(Figure 4). 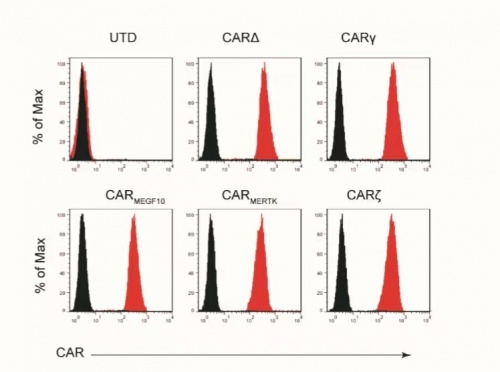 Figure 4. Membrane-bound CAR expression. Forty-eight hours after retroviral transduction, the expression of synthetic receptors on THP-1 cells was detected by staining with an anti-MYC antibody, followed by flow cytometry analysis. Untransduced THP-1 cells were used as a negative control. The histograms shown in black correspond to the isotype controls, whereas the red histograms indicate positive fluorescence.

After confirming the expression of CAR-MERTK on the macrophages, we next tested whether the CAR-MERTK macrophages would perform the phagocytosis function as we expected. We first cocultured the CAR-MERTK macrophages with the SARS-CoV-2 S pseudotyped viruses, which could be operated in class-2 biosafety cabinets. Then, the level of S protein in macrophages were measured through flow cytometry to indicate the amount of pseudotyped virions engulfed. As is shown in the diagram(Figure 5), the phagocytosis of the four different CAR-macrophages, including the CAR-MERTK, CAR-MEGF10, CAR-γ , CAR-ζ , but not the truncated CAR (CARΔ), is significantly higher than the UTD group. The results suggested that intracellular domain played an important role in phagocytosis. The low phagocytic score of the CARΔ demonstrated that the phagocytosis was not merely mediated by the affinity of αS -scFV.

Figure 5. The uptake of pseudotyped virions by UTD and CAR macrophages was analyzed by flow cytometry. Different cell lines were stained with an anti-S primary Ab. The histograms shown in black correspond to the isotype controls, whereas the red histograms indicate positive fluorescence. Data are reported as the phagocytic score (% positive cells x MFI, right panel).

3.The inflammatory reaction can be blocked when the CAR-MERTK macrophages engulf the SARS-CoV-2 S pseudotyped virions 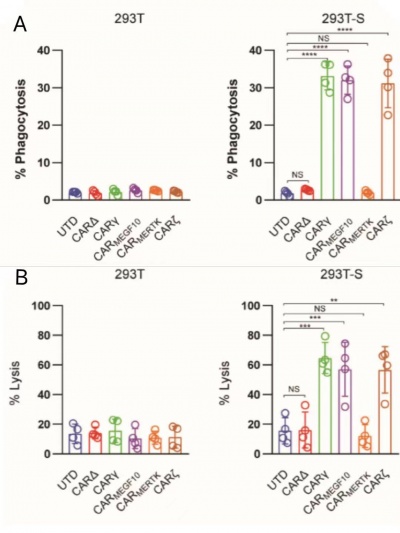 Cytokine release syndrome (CRS) is an important cause of death in severe Covid-19 patients and is a common adverse effect in CAR-T therapies. So, our next goal was to confirm that the CAR-MERTK macrophages can engulf the SARS-CoV-2 viruses in a low inflammatory manner. As the results showed, the cytokines released, including the GM-CSF, IL-1β, IL-2, IL-4, IL-5, IL-8, IL-10, and IFN-γ, were not significant in the CAR-MERTK macrophages group(Figure 7).

Figure 7.Cell lines were infected with the SARS-CoV-2 pseudotyped virus or mock infected. Cytokine levels in the supernatants were determined by a multiplex bead array. The relative level was calculated as the ratio of the infected cells to the mock-infected THP-1 cells. Data are shown as the mean ± s.d.

The above data demonstrated that CARMERTK cells can direct anti-virus phagocytic activity without induction of pro-inflammatory cytokines, we therefore sought to translate this platform to primary human macrophages. Primary human macrophages were generated from peripheral blood CD14+ monocytes and then engineered with MERTK CAR or CD3z CAR, termed as CARMERTK-M cells or CARz-M cells. Similar to the THP-1 cells, the resultant primary human CARMERTK-M cells demonstrated no cell killing effect but a strong antigen-specific phagocytosis of SARS-COV-2 virions, and this process did not induction of pro-inflammatory cytokines (Figure 8). Moreover, adding anti-S scFv notably inhibit the phagocytosis effect, suggest that the biological effect of CARMERTK-M cells is antigen dependent. 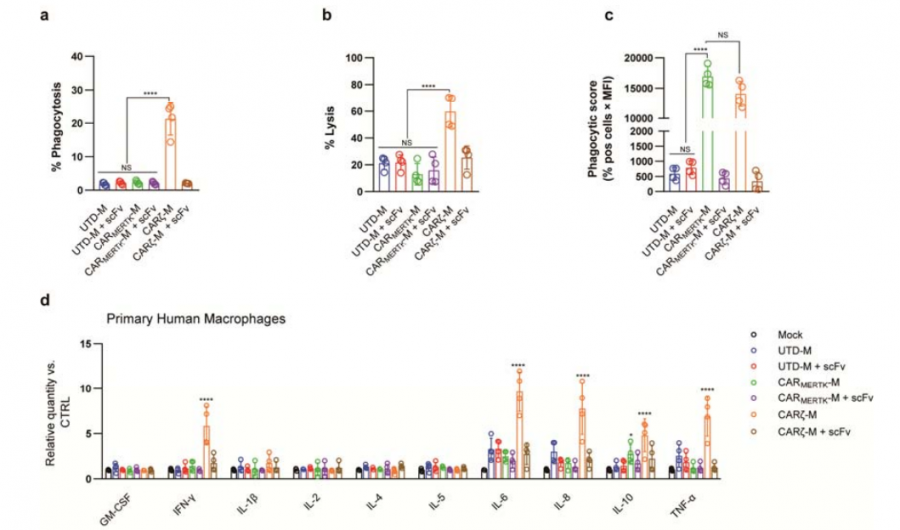