It plays an important role in intrathymic T-cell differentiation. Additionally, participates in the activity-dependent synapse formation of retinal ganglion cells (RGCs) in both the retina and dorsal lateral geniculate nucleus (dLGN) (By similarity). 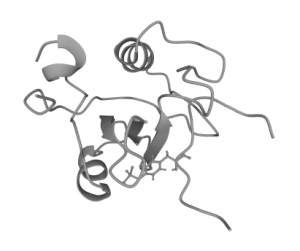 Used in our project

The synthetic receptors were constructed to contain an scFv derived from an antibody recognizing the virus spike protein, CR3022, which has been reported to bind with the receptor-binding domain of the SARS-CoV-2 S glycoprotein with high affinity, and the CD8 transmembrane domain present in the aCD19 CAR for T cells. For the cytoplasmic domains, we used the common g subunit of Fc receptors (CARg), MEGF10 (CARMEGF10), MERTK (CARMERTK) and CD3z (CARz) in our study. These cytoplasmic domains are capable of promoting phagocytosis by macrophages[3]. More details and experimental results can be found in CAR-CD3 zeta(BBa_K4040017)

Used in the construction of CAR-Macrophages cells

Previous study has engineered phagocytes that recognize and ingest targets through specific antibody-mediated interactions. This strategy can be directed towards multiple extracellular ligands(CD19 and CD22) and can be used with several intracellular signaling domains that contain ITAM motifs (Megf10, FcRV, and CD3z). Previous work has suggested that spatial segregation between Src-family kinases and an inhibitory phosphatase, driven by receptor ligation, is sufficient to trigger signaling by the T cell receptor (Davis and van der Merwe, 2006; James and Vale, 2012) and FcR(Freeman et al., 2016). The CAR-Ps that we have developed may similarly convert receptor-ligand binding into receptor phosphorylation of ITAM domains through partitioning of kinases and phosphatases at the membrane-membrane interface.

Thus, although using CAR-Ps to enhance cross presentation of cancer antigen is an intriguing future avenue, such a strategy would likely require more optimization of the dendritic cell subset employed or the CAR-P receptor itself. Previous study has demonstrated that the CAR approach is transferrable to biological processes beyond T cell activation and that the expression of an engineered receptor in phagocytic cells is sufficient to promote specific engulfment and elimination of cancer cells.

CAR-P is a successful strategy for directing macrophages towards cancer targets, and can initiate whole cell eating and trogocytosis leading to cancer cell elimination(Figure 2)[4]. 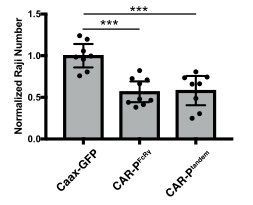 Figure 2.10,000 macrophages and 20,000 Raji B cells were incubated together for 44 hr. The number of Rajis was then quantified by FACS. 2–3 technical replicates were acquired each day on three separate days. The number of Rajis in each replicate was normalized to the average number present in the GFP-CAAX macrophage wells on that day. * indicates p<0.01, *** indicates p<0.0001 by two-tailed Fisher Exact Test(a and e) or by Ordinary one way ANOVA with Dunnet’s correction for multiple comparisons; error bars denote 95% confidence intervals.

Co­localization and anti­tumor acti vity of CAR­M were evaluated by immunohistochemical analysis of explanted lungs, revealing the presence of multiple meta­ static tumor nests in this model (Fig. 3a), with a significant reduc­tion in metastatic tumor burden after CAR­M treatment (Fig. 3b)[5].

Figure 3. a, Lungs from mice with metastatic disease were assessed with dual immunohistochemical analysis (tumor: anti-GFP, brown; macrophage detection: anti-human CD68, red). Each panel shows low (left), medium (middle) and high (right) power view. The experiment was performed once. b, Quantification of GFP+ tumor cells in n = 5 random ×20 high-power fields per slice, with two slices per mouse and two mice per group. Analysis was done by an observer who was blinded to treatment group allocation. Data are presented as the mean, with statistical significance calculated using multiple two-sided t-tests.

Macrophage phenotype is plastic and can change in response to cytokines, pathogen-­associated molecular patterns, metabolic cues, cell–cell interactions and tissue­specific signals[6]. CAR­Ms maintained a pro­inflammatory phenotype within the human TME.

Using the humanized TME mouse model, the effect of CAR­Ms on the surrounding TME was interrogated at single­cell resolution. Adoptively transferred macrophages were removed from analysis by excluding all human male cells. The human TME grouped into two large clusters (cluster 0 and cluster 1) and one small cluster of cells that was excluded from analysis (cluster 2). Cluster 0 was enriched in the CAR­M­treated arm (86% CAR, 14% UTD), whereas cluster 1 was enriched in the UTD­treated arm (71% UTD, 29% CAR) (Fig. 4a). Gene expression analysis of cluster 0 revealed an enrichment of pro­inflammatory genes such as MHC­II and TNF , demonstrating that CAR­Ms remodeled the TME toward a pro­inflammatory state (Fig. 4b)[5].

Figure 4. a, Cluster plots demonstrating the phenotypic distinction of human TME after UTD versus CAR-M treatment. Cluster 0 was enriched in the CAR-M-treated arm (86% events from the CAR cohort), whereas cluster 1 was enriched in events from the UTD-treated arm (71% events from the UTD cohort). Cluster 2 was mixed and had few events. b, Gene expression heat map from each TME scRNAseq cluster from a. Pro-inflammatory genes were found in cluster 0 (annotated in red). Potential anti-inflammatory or M2-associated genes in cluster 1 are annotated in blue.n = 3 mice per group; the experiment was performed once. 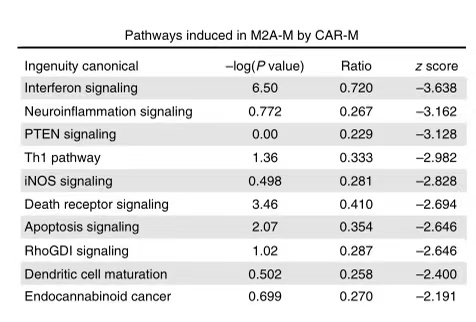 Additionally, CAR­Ms induced activation and maturation markers in immature human dendritic cells (Fig. 6a) and directly induced the recruitment of both resting and activated human T cells in an in  vitro chemotaxis assay (Fig. 6b). Finally, having shown that CAR­Ms can exert a dominant effect on surrounding immune cells, we demonstrated that CAR­Ms maintained their anti­tumor activity in the presence of human M2 macrophages (Fig. 6c). 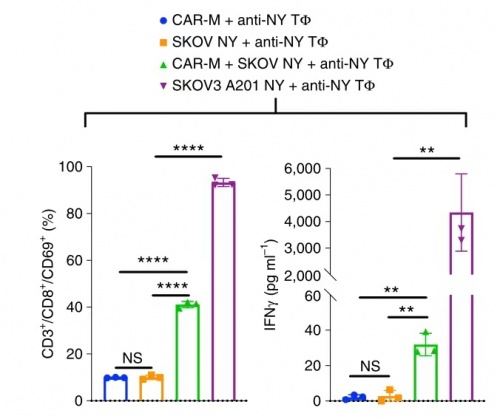 In T cells, phosphorylated ITAMs in CD3z bind to tandem SH2 domains (tSH2) in the kinase ZAP70. Zap70 is not expressed in macrophages, but Syk, a phagocytic signaling effector and tSH2 domain containing protein, is expressed at high levels (Andreu et al., 2017). Previous work suggested that Syk kinase can also bind to the CD3z ITAMs (Bu et al., 1995), indicating that the CAR-T may promote engulfment through a similar mechanism as CAR-PFcRV. To quantitatively compare the interaction between SyktSH2and CD3z or FcRV in a membrane proximal system recapitulating physiological geometry, a study used a liposome-based assay (Figure 2 [Hui and Vale, 2014]). In this system, His10CD3z and His10-Lck (the kinase that phosphorylates CD3z) are bound to a liposome via NiNTA-lipids and the binding of labeled tandem SH2 domains to phosphorylated CD3z was measured using fluorescence quenching. Their results show that Syk-tSH2 binds the CD3z and FcRV with comparable affinity (~15 nM and ~30 nM respectively).

Collectively, these results demonstrate that the TCR CD3z chain can promote phagocytosis in a CAR-P, likely through the recruitment of Syk kinase[4].

Figure 9. Model of the liposome-based fluorescence quenching assay used to determine affinity between the Syk tSH2 domains and the receptor tails of CD3z and FcRV, two intracellular signaling domains that promote engulfment. Binding between the Syk tSH2 reporter (Syk tSH2), green, and a receptor tail, purple, was detected by rhodamine quenching of BG505 dye on the reporter (see Materials and methods). Kd was determined by assessing mean fluorescence quenching for the last 20 timepoints collected ~45 min after ATP addition over a receptor titration from 0 to 500 nM. Each point represents the mean ± SD from three independent experiments. Kd ± SE was calculated by nonlinear fit assuming one site specific binding.

Previous study has generated CAR-Ms targeting the solid tumor antigens mesothelin or HER2 and demonstrated phagocytosis of antigen-positive target cells (Fig.10a,b)[5]. Together, these data demonstrated that CD3ζ based CARs can direct anti-tumor phagocytic activity and provided support for subsequent efforts to translate this platform to primary human macrophages. 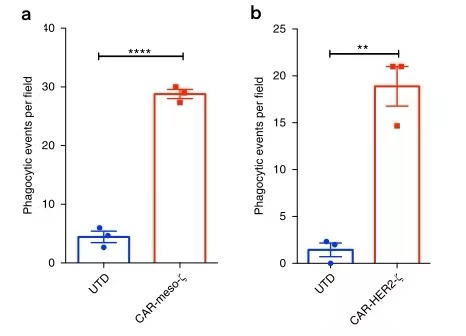