Intracellular Domain of the MERTK Protein

This part codes the intracellular domain of the MERTK protein. MERTK is a receptor tyrosine kinase that transduces signals from the extracellular matrix into the cytoplasm by binding to several ligands including LGALS3, TUB, TULP1 or GAS6. It regulates many physiological processes including cell survival, migration, differentiation, and phagocytosis of apoptotic cells (efferocytosis). Ligand binding at the cell surface induces autophosphorylation of MERTK on its intracellular domain that provides docking sites for downstream signaling molecules. Following activation by ligand, interacts with GRB2 or PLCG2 and induces phosphorylation of MAPK1, MAPK2, FAK/PTK2 or RAC1. MERTK signaling plays a role in various processes such as macrophage clearance of apoptotic cells, platelet aggregation, cytoskeleton reorganization and engulfment. Functions in the retinal pigment epithelium (RPE) as a regulator of rod outer segments fragments phagocytosis. Plays also an important role in inhibition of Toll-like receptors (TLRs)-mediated innate immune response by activating STAT1, which selectively induces production of suppressors of cytokine signaling SOCS1 and SOCS3. 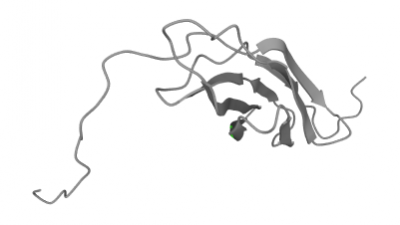 The TAM receptors (Tyro3, Axl and MerTK) are a well-studied family of receptors that, in addition to their function in many other cell types, including cancer cells, play roles in macrophage polarization and efferocytosis. Each receptor’s extracellular domain contains two immunoglobulin-like (IgL) repeats and two fibronectin type III (FNIII) repeats. This is followed by a single helix transmembrane domain and the cytoplasmic tyrosine kinase domain (TKD) containing the KW(I/L)A(I/L)ES consensus sequence [1]. MerTK was originally identified as the oncogene v-ryk from avian retroviruses and recognized as a member of the Axl family when the murine form was cloned [2, 3].MerTK is also referred to as MER, RP38, c-Eyk, c-mer, and Tyro12.

Although studies using chimeric receptors provided important information on MERTK signaling, identification of authentic MERTK ligands permitted analysis in a more physiologic context. The first ligand described was Gas6, identified by purification of Axl-activating conditioned media. Gas6 binds MERTK, but with 3- to 10-fold lower affinity [4,5]. Subsequently, protein Swas identified as a MERTK ligand that did not activate Axl [6, 7].Both ligands are secreted by multiple cell types and are present in human blood, although total protein S levels are 1,000 fold higher; however, modifications of protein S may be necessary for it to activate Mer [8–10]. Unique to Protein S is a thrombin sensitive cleavage site between the Gla and EGF-like domains [11]. There are three newly discovered ligands of the TAM receptors: Tubby and galectin-3, which bind MerTK, and Tubby-like protein 1 (Tulp-1) which binds all three receptors [12–14].

Consistent with other receptor tyrosine kinases (RTKs), the TAM receptors become activated following ligand binding, receptor dimerization and subsequent trans-autophosphorylation of the kinase domains to activate intracellular signaling cascades and modulate gene transcription. More specifically, the TAM receptors are activated upon IgL domain binding to the LG-like domains of their ligand [15, 16]. Prior to activation, glutamic acid γ-carboxylation of the Gla domain the ligand Gas6 or Protein S is required [17].

One MERTK chimeric protein was made by fusing the extracellular domain of CD8 to the intracellular domain of MERTK creating a constitutively active MERTK chimera [18]. This MERTK chimera conferred an interleukin 3(IL-3)–independent phenotype to Ba/F3 pro-B lymphocytes. The Grb2, MEK1, and Erk pathways as well as PI3K were also activated. NF-kB–mediated transcription was increased as assessed by a luciferase-reporter assay with potential activation of antiapoptotic signaling in tumor cells [19].The p38 pathway was also activated and p38 inhibition decreased proliferation in MERTK chimeric Ba/F3 cells. Similar to NF-kB, p38 has complex effects on proliferation, migration, and survival in cancer cells [20].

A Phagocytic receptor for apoptotic cells

MERTK’s physiologic role in ingesting apoptotic material in macrophages is an action that is in part dependent on a MERTK:Vav activation process that stimulates Rac CDC42 and Rho GDP to GTP exchange[21]. Related to the concept of receptor trafficking, a recent study found MERTK to be located not only at the cell surface, but also in the nucleus.

In the cells that do not express TIM4, Mer has the capacity to serve a unique dual role in mediating both tethering of ACs to the macrophage surface as well as subsequent AC engulfment.Tethering is independent of Mer tyrosine kinase activity, but Mer-dependent signaling is required for AC internalization by macrophages. The actin cytoskeleton is required for both Mer-dependent tethering and subsequent phagocytosis. Mer has dual activities and can function as a mediator of both AC tethering and subsequent phagocytosis[22].

Used for a intracellular domain of CAR

A CAR construct includes antigen-recognition domains in the form of a single-chain variable fragment (scFv) or a binding receptor/ligand in the extracellular domains, a transmembrane domain providing the scaffold and signaling transduction, and intracellular domains from the T cell receptor (TCR) and costimulatory molecules that trigger T cell activation [23]. Interestingly, we reported that one CAR with the intracellular domain of MERTK did not show a notable killing effect in antigen-expressing cell-based models compared with other CARs but did demonstrate antigen-specific clearance of SARS-CoV-2 virions in vitro without the secretion of proinflammatory cytokines.

Synthetic receptors contained the human CD8a signal peptide followed by the scFv linked in-frame to the hinge domain of the CD8a molecule, transmembrane region of the human CD8 molecule, and intracellular signaling domains of the FCER1G, MEGF10, MERTK or CD3z molecules.

We observed strong internalization of virions in CARMERTKcells, which did not show specific phagocytic or lytic effects on S protein-expressing 293T cells. Moreover, adding the anti-S scFv significant inhibited the virion internalization effect, supporting the role of CAR receptor in this process . Since all the CARs exhibited the ability to induce phagocytosis of SARS-CoV-2 virions while there was no evidence of infection, these experiments strongly suggest the clearance of SARS-CoV-2 virions of CAR macrophages.

Following SARS-CoV-2 treatment of THP-1 cells, we observed slightly increased secretion of the cytokines IL-6, IL-8 and TNF-a, but no discernable patterns could be confidently drawn for GM-CSF, IL-1b, IL-2, IL-4, IL-5, IL-8, IL-10, and IFN-g. CARD cells showed a cytokine profile similar to that of UTD macrophages. Notably, we observed not only strongly increased induction of IL-6, IL-8 and TNF-a but also induction of IFN-g and IL-10 in SARS-CoV-2-treated CARg and CARz cells. However, for CARMERTKcells, we did not observe significant changes in cytokines.

We have found that CARMERTKcells can direct anti-virus phagocytic activity without induction of pro-inflammatory cytokines, we therefore sought to translate this platform to primary human macrophages. Primary human macrophages were generated from peripheral blood CD14+monocytes and then engineered with MERTK CAR or CD3z CAR, termed as CARMERTK-M cells or CARz-M cells. Similar to the THP-1 cells, the resultant primary human CARMERTK-M cells demonstrated no cell killing effect but a strong antigen-specific phagocytosis of SARS-COV-2 virions , and this process did not induction of pro-inflammatory cytokines . Moreover, adding anti-S scFv notably inhibit the phagocytosis effect, suggest that the biological effect of CARMERTK-M cells is antigen dependent.

Figure 2. (A) Different cell lines were inoculated with a SARS-CoV-2 pseudotyped virus. At 16 h post inoculation, pseudotyped virus entry was analyzed by determining the luciferase activity in cell lysates. Signals obtained for particles bearing no envelope protein were used for normalization. The average of three independent experiments is shown. Error bars indicate the SEM. (B) The uptake of pseudotyped virions by UTD and CAR macrophages was analyzed by flow cytometry. Different cell lines were stained with an anti-S primary Ab. The histograms shown in black correspond to the isotype controls, whereas the red histograms indicate positive fluorescence. Data are reported as the phagocytic score (% positive cells x MFI, right panel). (C) Cell lines were infected with the SARS-CoV-2 pseudotyped virus or mock infected. Cytokine levels in the supernatants were determined by a multiplex bead array. The relative level was calculated as the ratio of the infected cells to the mock-infected THP-1 cells. Data are shown as the mean ± s.d.

Notably, CARMERTK, which was regarded as an unsuccessful receptor in a previous report [24] and showed no cellular killing effect on target cells when expressed in THP-1 cells in our assay, demonstrated a virion clearance capacity similar to that of CARg and CARz. Our data further support that CARMERTK mediates ‘immunologically silent’ virion removal, which does not elicit a proinflammatory response.