Polyethylene terephthalate (PET) is the most widely produced polyester plastic and its accumulation in the environment has become a global concern. At the same time, the daily intake of microplastics by humans is gradually increasing, which damages human health. Therefore, researchers believe that it is important to develop an environmental-friendly plastic degradation method by using microorganisms. Recently, a novel bacterial strain called Ideonella sakaiensis 201-F6 has been discovered that produces a couple of unique enzymes, IsPETase and MHETase, enabling the bacteria to utilize PET as their sole carbon source.

Figure 1. Action and function of IsPETase in PET degradation...

The enzyme IsPETase is a hydrolase, and it is crucial for hydrolysis of PET. To verify this property, we use E. coli as the starting strain and construct an engineered strain of IsPETase to explore its biological activity of the hydrolysis of PET. To purify the protein, we also transfer the plasmid expressing IsPETase into BL21(DE3). We use pGEX as backbone and add a GST tag at its N-terminal. The enzyme is under the regulation of T7 promoter and can be induced by adding IPTG.

The T7 promoter is often used for protein overexpression. It is powerful and specific. It is completely controlled by T7 RNAP. When T7 RNAP is present in the cell, the T7 expression system occupies an absolute advantage compared to the host expression system. Its expression The speed is 5 times that of the former.

Purification of IsPETase( ~35.13 kDa)_BL21(DE3) In order to present the function of the part, the IsPETase and MHETase gene were expressed in E. coli under the control of T7 promoter. Then the bacterial cells are collected and crushed. The samples of whole expression cell lysate, supernatant and pellet of cell lysate were analyzed using SDS-PAGE and Western blot (only for his-tag proteins from pET28a vector), which is found in the corresponding protein band of approximately 35 kDa (Figure 2).

Lane 3: Supernatant of cell lysate with induction for 16h at 15 oC

Lane 4: Supernatant of cell lysate with induction for 4 h at 37 oC

Lane 5: Pellet of cell lysate with induction for 16h at 15 oC

Lane 6: Pellet of cell lysate with induction for 4 h at 37 oC 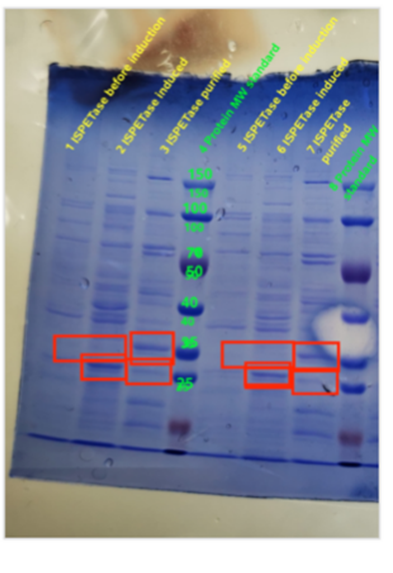 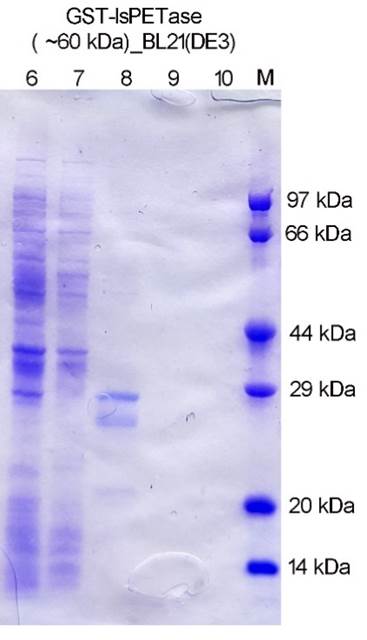 Fig.4 SDS-PAGE analysis for IsPETase cloned in pGEX-6P-1 and expressed in BL21(DE3) strain...

Lane 6: IsPETase Cell lysate without induction for 20 h at 16oC

Lane 7: IsPETase Cell lysate with induction for 20 h at 16oC