This is a native bidirectional promoter of the csc operon from E. coli EC3132, a strain that can naturally consume sucrose [1].

The broader csc operon consists of two constituent operons, a cscA operon and a cscBK operon, both of which are under the bidirectional promoter. The cscABK genes are regulated by a repressor coded by cscR, which is under the control of a different promoter[2].

This bidirectional promoter shares a 99.55% sequence alignment with its homologue from E. coli W (verified by NCBI BLAST search), a strain that can also naturally consume sucrose. 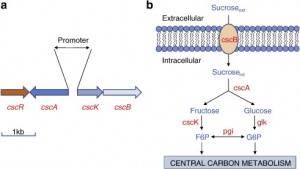 Sequence of bidirectional promoter region in the csc operon in E. coli EC3132. "The putative −35 and −10 regions are underlined, as well as the putative ribosome-binding sites (RBS) and the start codons of cscK and cscA. Transcriptional start points (TK) are indicated by letters in boldface italic type, the putative csc operators are boxed, and the putative cAMP-CrpA binding sites are marked with diagonal lines." Figure and image description adapted from Jahreis et al. (2002) [1]