cscA allows E.coli to grow on sucrose as a sole carbon source. Knockout strains of cscA could not grow on sucrose suggesting that it is essential for sucrose metabolism. Intracellular sucrose is hydrolyzed to glucose and fructose and its expression is derepressed at low sucrose concentrations (0.2 %). Overexpression of cscA alone has been shown to confer sucrose utilizing ability in different E.coli strains, however with low growth rates. [1] Overexpression has also been shown to result in leakage of the invertase, which was identified in the extracellular medium [2]. However, in wild-type strains, invertase activities are exclusively intracellular [1]. 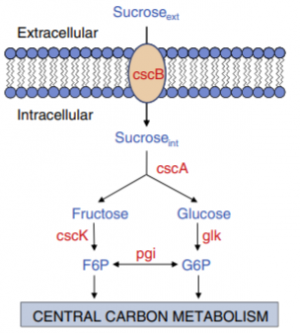