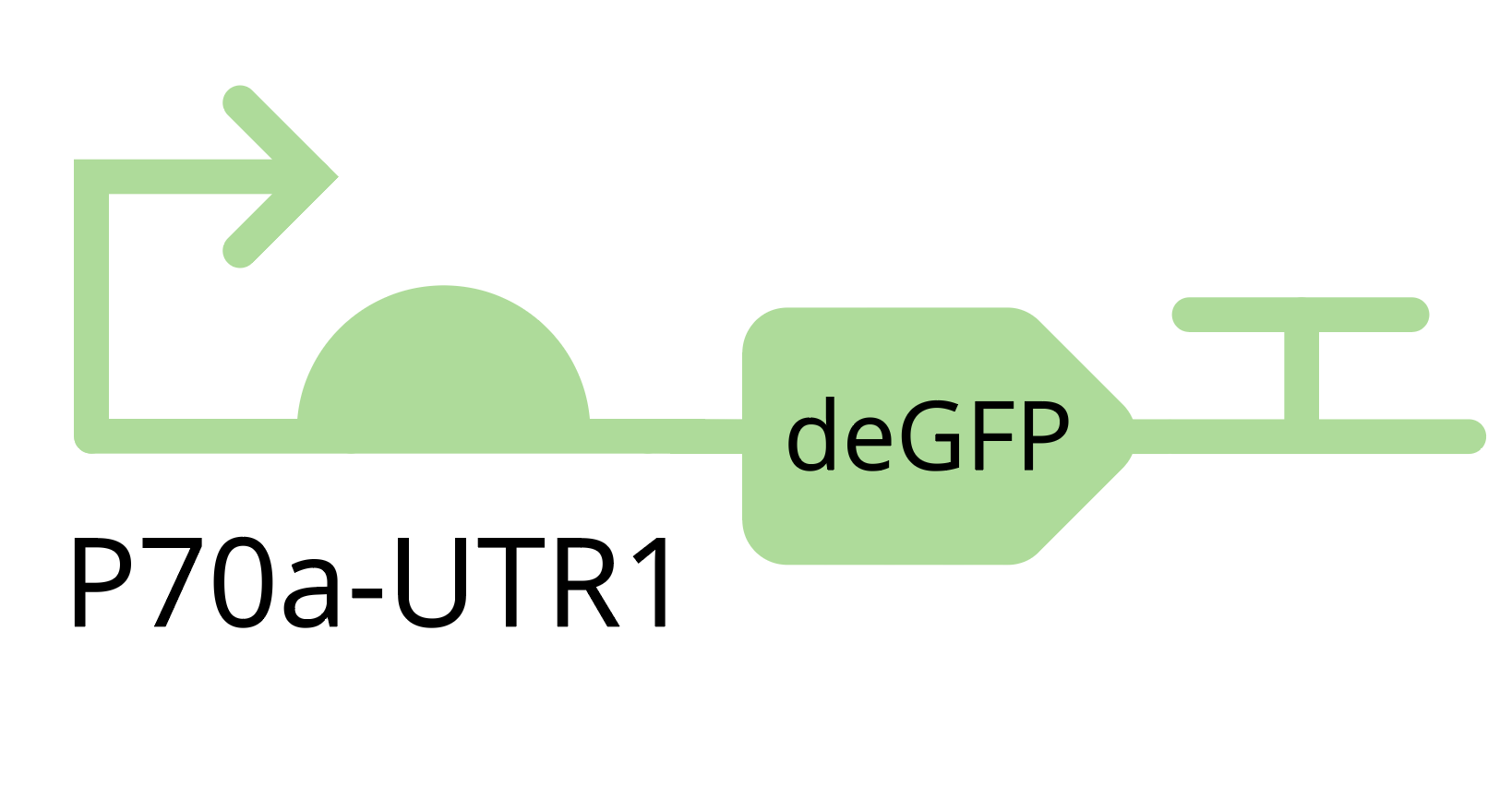 The deGFP reporter gene is an important component of synthetic biology, and the expression level of this gene can indicate many interesting characteristics of an experiment, such as sensitivity, leakage, etc. DeGFP synthesis rate differs for the same element in different chassis.
Our team found the component J23100-deGFP (BBa_K2205002) registered by iGEM17_Newcastle in the Parts, but the synthesis rate of deGFP in the Cell-Free system was lower than that in a cell-based system.
As a result, according to promoters and RBS suitable for Cell-Free systems reported in literature , through experiments and modeling, we found the combination of promoter and RBS that best expresses deGFP, and we registered it as BBa_K3885311 .

An E. coli cytoplasmic extract, absent any remaining living E. coli cells, provides the Transcription-Translation(TX-TL) molecular machineries. One of the unique features of this platform is at the level of transcription. Unlike conventional hybrid bacteriophage systems, transcription is solely based on the endogenous core RNA polymerase with the primary σ70.
Transcription is based on the core RNA polymerase and the primary sigma factor σ70 present in the cytoplasmic extract. All of the circuitries start with σ70 specific promoters.
The promoter P70a: previously described as P70, originates from the lambda phage repressor Cro promoter with the two operators sites OR2 and OR1 overlapping the −10 and −35 sequences. This σ70 E. coli promoter is the strongest so far reported. Unless otherwise stated, plasmids contain the untranslated region UTR1 from bacteriophage T7, one of the strongest bacterial untranslated regions, routinely used in recombinant protein expression.
The untranslated region (UTR), which contains ribosome binding sites, is also critical for regulating protein expression intensity. The strongest E. coli UTR reported to date is the main sequence of the g10 gene from phage T7, which we have named UTR1. When P70a is associated with UTR1, eGFP synthesis can reach up to 2 mg /mL(80μM) in batch mode reaction, comparable to using the T7 promoter.
deGFP：eGFP truncated and modified in N­ and C­ terminus

12μL Arbor bioscience myTXTL σ70 reagent carries plasmid P70a-UTR1-deGFP(5nM). After vortexing gently, pipette 5 μL from the reaction into two wells in the 96 V-bottom well plate. Seal the wells with caps, place the well plate into the plate reader, and begin measurement, incubate at 29℃, 10 minutes for 6h, 488/535 nm Ex/Em, at gain 60.


2.The synthetic rate of plasmid P70a-UTR1-deGFP at different concentration in the Cell-Free system. 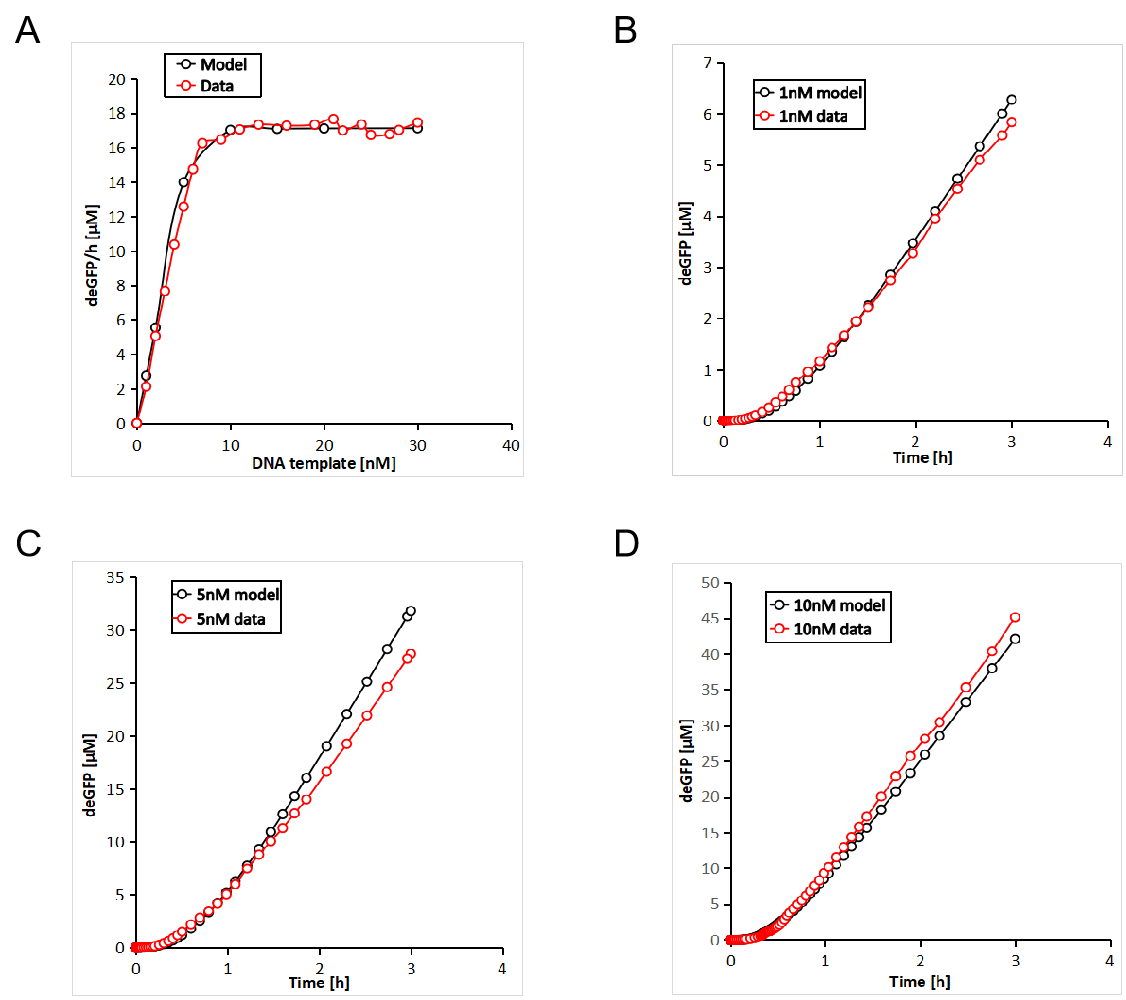 With the model and constants now established, we can look at how the model compares to the measured fluorescence synthesis rates deGFP from the P70a-deGFP. Figure 2A shows the maximum rate of deGFP synthesis in TXTL reactions and the with the model. The model is able to capture the linear regime (up to 5 nM plasmid) and the saturation regime (above 5 nM). We can also look at the fluorescence kinetics of expression at various plasmid concentrations (Figure 2B,C,D), including one below, one at, and one above the regime of limiting resources. We focus on the first three hours of gene expression, due to the changing reaction conditions, especially at high plasmid concentration. 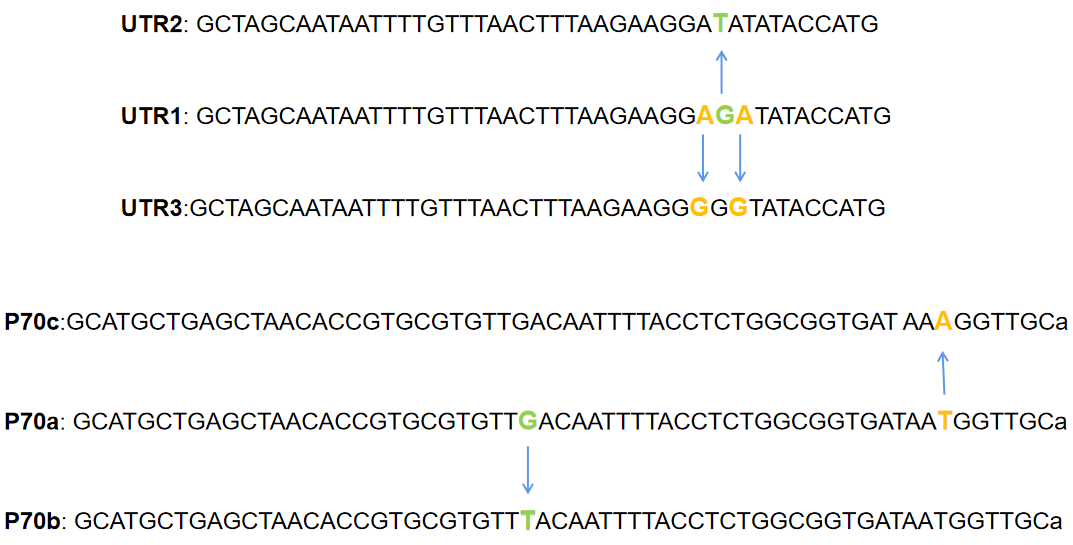 Figure 5. Rates of deGFP synthesis in the Cell-Free system, compared with model predictions, for reactions containing one of 3 plasmids, including the combinations of promoters P70a, P70b and P70c with UTRs UTR1, UTR2 and UTR3, at various different plasmid concentrations.

The figure indicates that the intensity of promoter is P70a>P70b>P70c. The relative strength of UTR spans nearly two orders of magnitude.