Allowing bacteria to sense glucose levels in the environment to act on the kill switch mechanism. . Sequence and Features

The plasmid pet-GluK was selected for verification, and the transformed plasmid DH5a (GluK) was verified by plasmid running gel and PCR. As can be seen from figure 1, the sample band was over 5000 bp, basically in line with the target band of 6540 bp, which proved that our plasmid transformation was successful. PCR validation was also carried out for plasmids in DH5a (PET-GK), and GluK was the target fragment. As can be seen from the figure, after PCR, the sample ran out a band near 1000 bp, and the target fragment was 904 bp. The sample fragment was consistent with the target fragment, which further indicated that our plasmid transformation was successful. 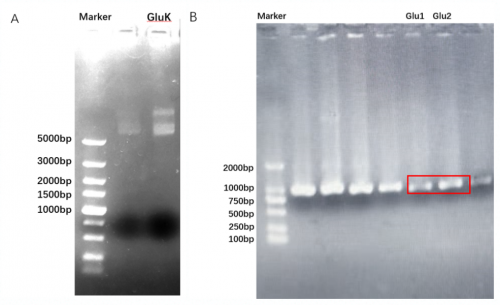 The engineering bacteria transferred into the plasmid were compared with the ordinary strain for experiment. The bacteria were cultured to a plateau stage and then the experiment was started. The bacteria were cultured under different concentrations of glucose. Put them in a 37 ℃ constant temperature incubator for 12h, and measure them every 0.5h. Survival rate = this hole OD600/ first measured value * 100% As shown in figure 2, compared with the control group, the growth of the bacteria transformed with the plasmids with the glucose-sensitive suicide switch was basically significantly inhibited, and the lower the glucose concentration in the environment, the more significant the inhibition effect was, and the lower the survival rate was reflected in the experiment. The contrast of the line chart shows the difference between the experimental group and the control group. Based on this, we believe that the glucose-sensitive kill switch can work normally. 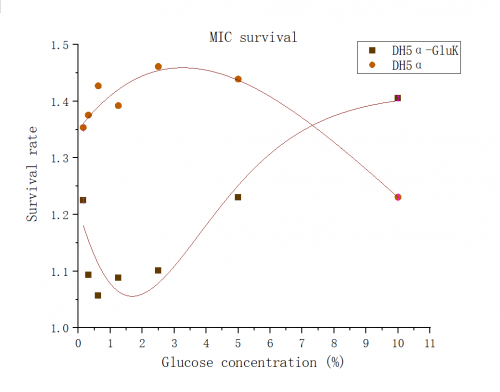