LL37 is an antimicrobial peptide secreted by human immune cells, which can inhibit harmful bacteria such as Helicobacter pylori and Staphylococcus aureus. At concentrations usually found on adult mucosal surfaces (1-5 μg/ml), the peptide does not play a direct bactericidal role, but participates in immune regulation, and LL37 protects against endotoxemia/septicemia. At very low concentrations (≤1 μg/mL) and under physiological salt conditions in vivo, LL-37 has powerful anti-endotoxin properties and can regulate inflammatory response by inhibiting the release of TNF-α in LPS-stimulated human monocytes and reducing LPS-induced transport of P50 / P65 to the nucleus. LL37 inhibits LPS-induced gene transcription and plays an anti-endotoxin role. In the presence of LPS, LL37 significantly inhibited the expression of specific pro-inflammatory genes up-regulated by NF-κB. LL37 treatment also significantly changed the species and abundance of intestinal flora in mice, revealing its important effect on intestinal flora. 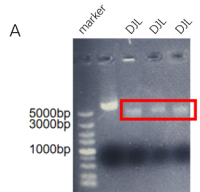 2. Protein level We validated the engineered bacteria at the protein level. As shown in Figure 28, for DH5α, a 4.5kDa LL37 protein band can be clearly seen in lane 4 compared with the LL37 standard in lane 2 and the control group in lane 5, as indicated by the arrow. The bands are clear and meet the expected size, which confirms the successful expression of our LL37 protein. 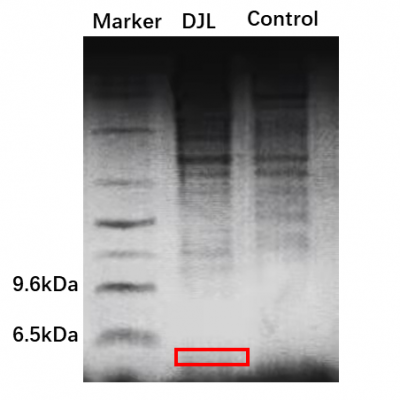