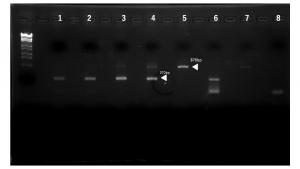 This part is used to purify homemade Reverse Transcriptase. This is derived from HIV-1(Human Immunodeficiency Virus). This enzyme is more thermotolerant than normal reverse transcriptase, making it useful for LAMP(Loop-Mediated Isothermal Amplification)) and RT-LAMP(Reverse Transcription Loop-Mediated Isothermal Amplification). A peptide made from one ORF is partially digested in an infected cell and becomes two fragments, p66 and p51. It is known that the HIV-1 RT functions when the p66 and p51 form a heterodimer. To purify them as recombinant proteins in E.coli, we separately expressed and purified p66 and p51, and dimerized them in vitro before use. This part is to express p51. We examined our homemade reverse transcriptase activity in vitro. We used total yeast DNA/RNA for this assay. We selected the intron-containing region of Rpl19A as a template for reverse transcription. If there is no reverse transcription, the genomic DNA including an intron is amplified by PCR, resulting in a band of 876 bp. On the other hand, if cDNA is correctly synthesized by reverse transcription, a band of 370 bp without an intron should appear. As shown below, the cDNA band was successfully observed in an RT-dependent manner. From this result, we concluded the activity of homemade RT. 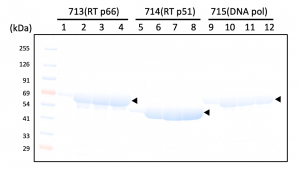 After the cell disruption by sonication, each protein was purified using Ni-NTA beads. Samples were eluted by a four-step gradient of Imidazole.(70mM, 95mM, 120mM, 270mM)

Fig2 shows the result of SDS-PAGE. Lane 5,6,7,8 are the result of Reverse Transcriptase.
We observed the correct bands in the SDS-PAGE gel. The arrowheads indicate the targeted proteins.