This is a high throughput sensing module that can sense the presence of AIP-I molecules. This part consists of a pBAD promoter, an AIP sensor infrastructure (BBa_I746101), an AIP inducible promoter P2 and a GFP reporter.

In the natural system, the signalling Auto-inducing peptide (termed AIP) is made from AgrD, while AgrB, a transmembrane protein that is responsible for the cyclization. AgrC and AgrA, form the two-component system responsible for AIP detection and response relay, respectively. Upon binding to AIP, AgrC, a transmembrane histidine kinase receptor, facilitates the phosphorylation of the transcriptional activator AgrA. The phosphorylated AgrA, in turn, activates gene expression regulated by P2 and P3 promoters. There are four known variants of AIP (AIP I-IV) with different molecular structures and cross-inhibitory activity.

To solve the leaky gene expression we designed a bidirectional circuit. We Used Hi-Fi DNA assembly kit to make this bidirectional circuit. First, we divided the existing part (BBa_K1022100) into three segments and ordered those from Twist Bioscience. These three fragments were assembled in two different ways to produce the existing part as well as our designed improved part. For these assemblies, we designed two different sets of primers (a total of eight primers) using the NEBilder tool. We extended our three gene fragments with appropriate primers to produce overlap sequences at both ends of each fragment.

To make the improved part, we designed the overlap sequences in such a way that the p2 promoter along with the GFP reporter is flipped. This will make the direction of pBAD promoter and P2 promoter opposite to each other, which will significantly decrease the leaky gene expression of the GFP reporter.

First, we PCR extended the three DNA segments (pBAD-agrC, P2-GFP,agrA,) of the unidirectional circuit with specific primers. To confirm the success of PCR extension an Agarose Gel Electrophoresis was performed. As evident from the picture below, correct bands for all three amplified DNA segments were obtained. (Extended pBAD-agrC ~ 1.4 Kb, Extended P2-GFP ~ 1Kb, Extended agrA ~ 800bp and extended backbone~2kb. 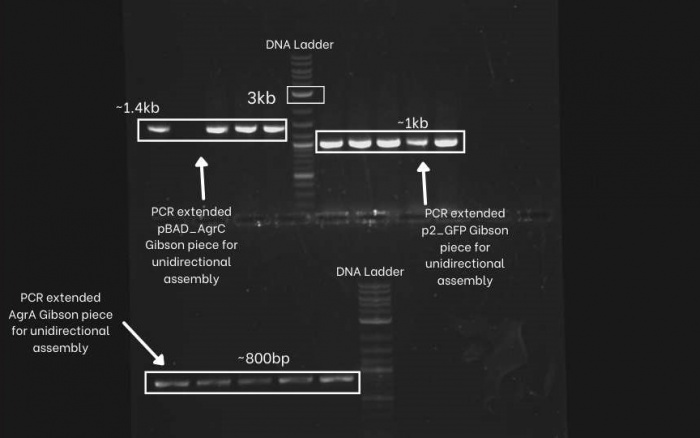 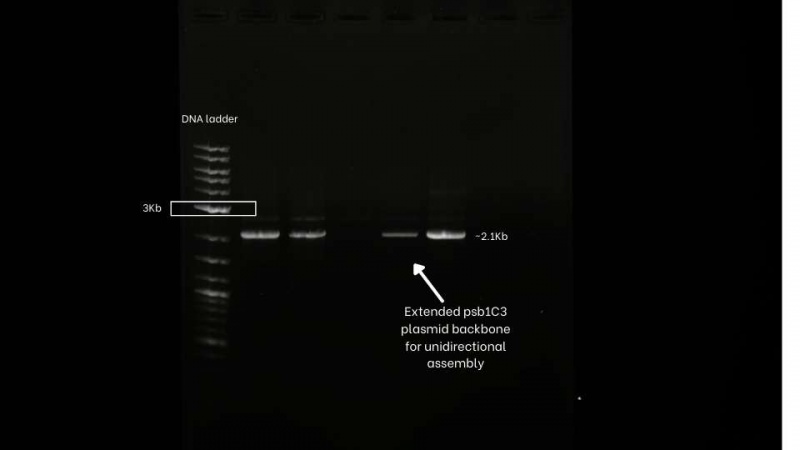 After that, the same three segments (pBAD-agrC, P2-GFP, agrA, and psb1C3 plasmid backbone) were PCR amplified with different sets of specific primers. This extended overlap helps flip the P2-GFP fragments. From the gel electrophoresis image below. We can observe similar band sizes as above because the difference in length of the extension is very low. 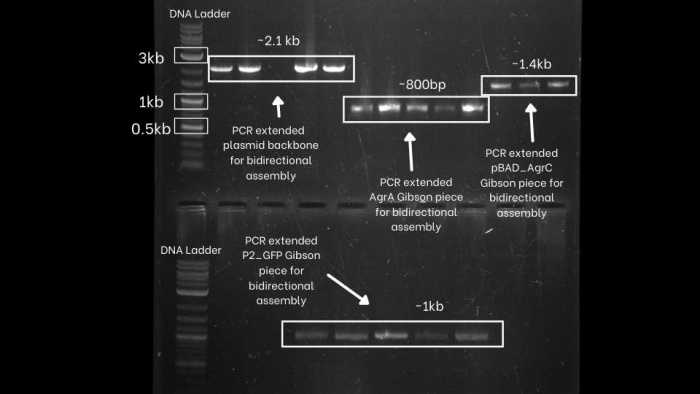 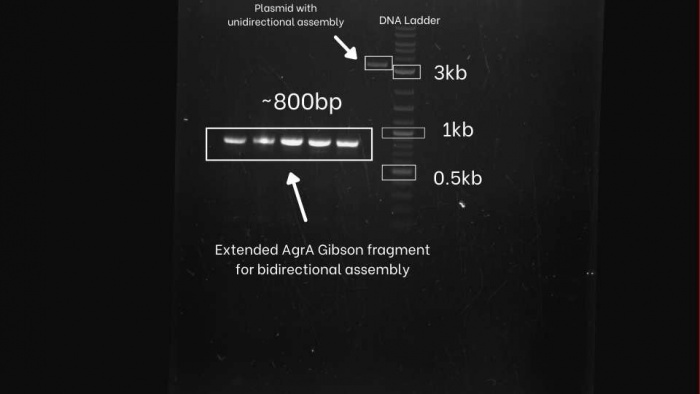 After the successful extension of the segments, those extended fragments were assembled using Hi-Fi DNA assembly master mix. The reaction mixture was transformed in the E.Coil DH5a. After that, colony PCR of both the unidirectional and bidirectional circuit was performed using VF2 and VR primers to identify the bacterial colony with our desired gene circuits.

As evident from the colony PCR results, positive inserts for both unidirectional and bidirectional assemblies were obtained. 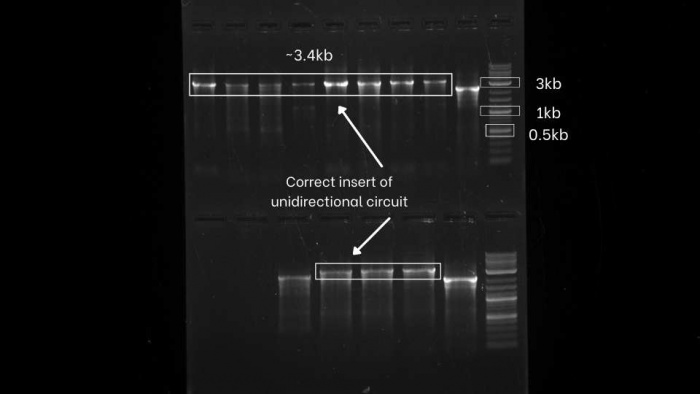 Colony PCR result of unidirectional assembly with VF2 and VR 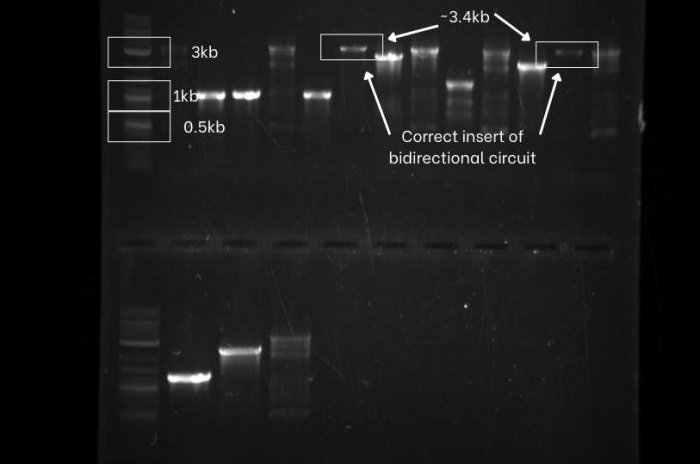 Colony PCR result of bidirectional assembly with VF2 and VR

After the successful assembling of both the fragments, we planned to see the expression level of GFP in both bidirectional and unidirectional circuits. For that, first, the AIP-1 generator (BBa_K3799006) was expressed in 40ml of bacterial culture to obtain AIP-1 molecules. After expressing for 8-10 hours, the culture was centrifuged and the supernatant was filter-sterilized. The supernatant was lyophilized to concentrate the AIP-1 molecule. After full lyophilization, it was resuspended in 3 ml of NFW to make a stock solution of AIP1.

The stock solution of AIP-1 molecules was diluted to make solutions of different concentrations, from 0% to 100%, where 0% was the negative control and 100% was the one-third dilution of our stock solution. 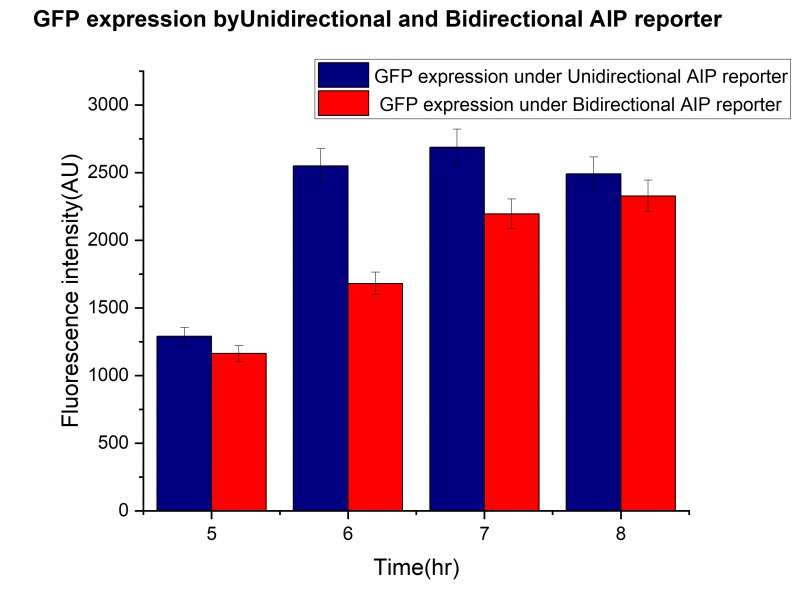 We also wanted to check whether this difference in leaky gene expression is consistent with different concentrations of AIP-1. 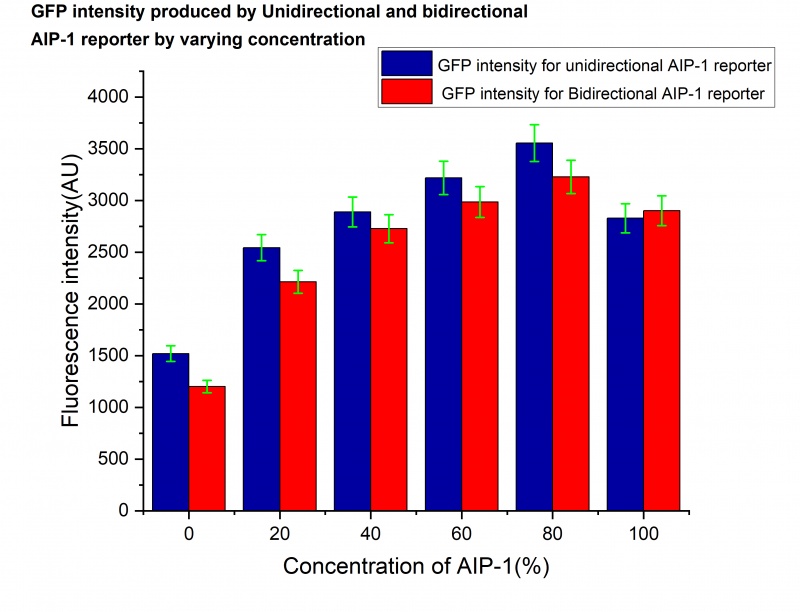