This part consist of the AIP generator(BBa_I746001) under standard IPTG inducible plac promoter(BBa_R0010) of Ecoli.It is used to express S aureus quorum sensing molecule,AIP-1 in Ecoli host. The biosynthesis of AIP requires AgrD, the peptide precursor of AIP, and the integral membrane endopeptidase AgrB.AIP-1 regulates the production of extracellular virulence factors using the agr quorum-sensing system by regulating P2 and P3 promoters.

Quorum sensing in S. aureus is regulated by cyclic thiolactone peptides known as autoinducing peptides (AIPs). The extracellular AIP produced by neighbouring bacteria is sensed by a two-component system encoded in the accessory gene regulator (agr) locus. At high concentration of AIP-1, the cascade is activated, leading to the production of virulence factors including toxins, superantigens, and exo-enzymes.

The biosynthesis of AIP requires AgrD which encodes the peptide precursor of AIP, and an integral membrane endopeptidase AgrB. AgrD propeptide produced initially localizes to the cytoplasmic membrane using the N-terminal amphipathic leader and the AgrB endopeptidase activity removes the AgrD C-terminal tail.

To create this composite part the simple part R0010(Plac promoter) and the I746001 (AIP generator - agrB + agrD with RBSes and terminator) containing pSB1C3 plasmids were obtained from the iGEM DNA Distribution kit. The plasmids were cloned separately in E.Coli DH5α cells and were plated on an LB agar plate containing Chloramphenicol. The primary culture of these transformed bacteria was given in LB media (Chl+) and plasmids were extracted using a miniprep kit. The purified plasmids were stored at -20℃ for future use. 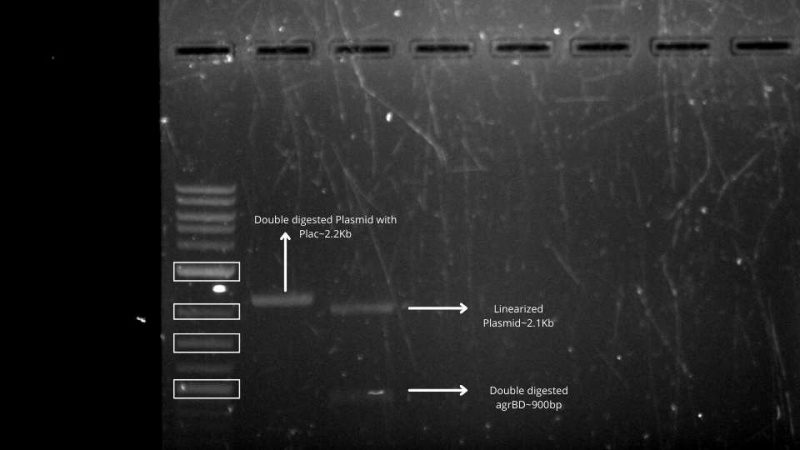 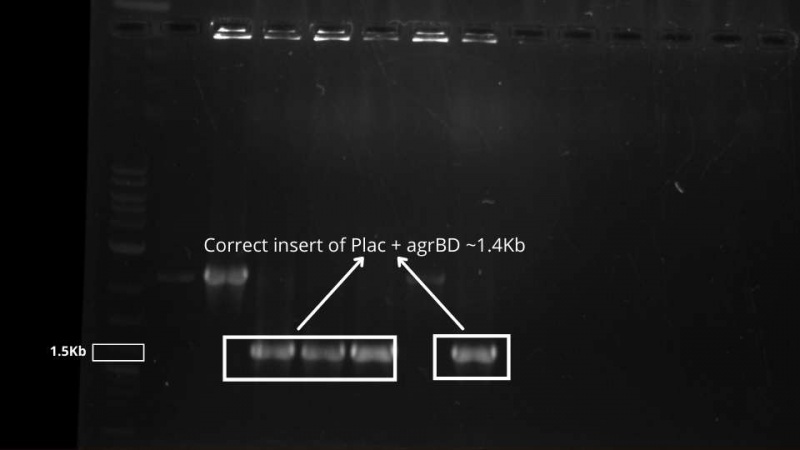 A colony having our desired plasmid was cultured overnight in LB media and the plasmid was extracted by using a miniprep kit. The purified plasmid was transformed into E.Coli BL21 expression vector. Transformed BL21 was cultured in LB media at 37C till 0.6 OD (600 nm) was reached. Protein expression was induced with IPTG. Protein expression was allowed for 10 hours at 30C. The bacterial cells were pellet down and the supernatant containing AIP molecule was filter-sterilised. The supernatant was lyophilised to increase the concentration of the protein content.

agrB_agrD is a part of the quorum-sensing unit found in Staphylococcus aureus responsible for producing the AIP-I molecules. AIP-I molecules are used by S.aureus for intraspecies communication.

To verify the activity of protein

It is important to check if the protein was expressed and in its active form. To check this we can check the GFP expression in the AIP inducible GFP reporter gene circuit.

The transformed bacteria containing the AIP-I producing gene were cultured in LB media. The media was incubated at 37 ℃ till 0.6 OD (600 nm) was reached. Protein expression was induced with IPTG. and the protein was allowed to express for 10 hours at 30℃. Then the bacterial cells were pelleted down and the supernatant containing the AIP protein was filter-sterilized. The protein-containing supernatant was concentrated by lyophilization.

E.Coli BL21 expression vector containing our pSB1C3 plasmid was obtained. This plasmid has AIP receiver- agrA and agrC system downstream to the pBAD promoter, and GFP under the AIP inducible P2 promoter. These bacterial cells were cultured in 2 different conical flasks containing LB media with Chloramphenicol. The culture was incubated at 37 ℃ till the OD 0.6 (600 nm). The AIP molecules were resuspended by adding nuclease-free water. AIP-I was given in one flask, while the AIP-I molecule was not added in the second flask. The GFP expression was quantified by measuring the fluorescence of the GFP using a fluorometer at time zero. Further, the samples were incubated at 30℃ for another 5 hours. Then the fluorescence of the sample was checked for every hour from hour 05 to 10 hours.

The data obtained were plotted and analysed. 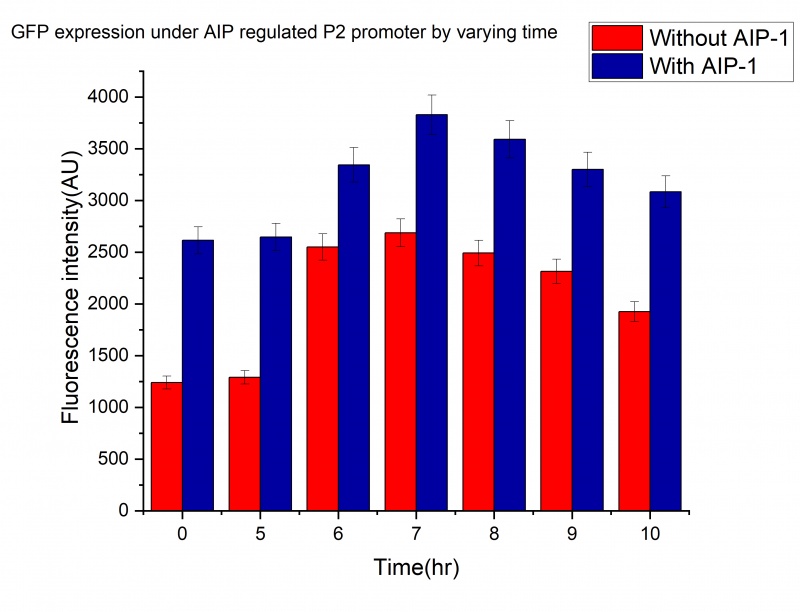 The graphical representation of the data makes it clear that there is a significant difference in the fluorescence intensity observed in the AIP inducible sample as compared to the sample without AIP. It shows that our Protein genetic circuit has successfully expressed the AIP protein and the expressed protein is active.

P2 promoter is an AIP inducible promoter. We want to check the variation in the expression of a gene downstream to the P2 promoter in response to a change in AIP concentration.

E.Coli BL21 expression vector containing our pSB1C3 plasmid was obtained. This plasmid has AIP receiver- agrA and agrC system downstream to the pBAD promoter, and GFP under the AIP inducible P2 promoter. These bacterial cells were cultured in 6 different conical flasks containing LB media with Chloramphenicol. The culture was incubated at 37 ℃ till the OD 0.6 (600 nm). The AIP molecules were resuspended by adding nuclease-free water. Different volumes of the resuspended AIP molecules were added to different conical flasks to induce protein expression. The flasks were incubated at 30℃ for 5 hours. The GFP expression was quantified by measuring the fluorescence of the GFP using a fluorometer. The obtained data were analysed to obtain the AIP concentration-dependent GFP expression. 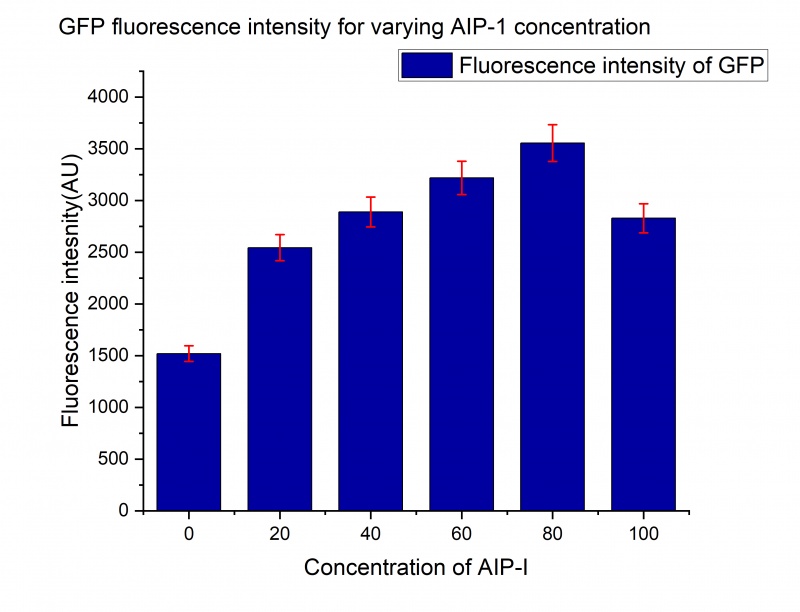 The analysis of the fluorescence data shows that the expression of GFP has increased with the addition of a higher volume of resuspended AIP molecules. That is, the GFP expression has increased with an increase in the AIP-I concentration in the media. This further proves that our cloned genetic circuit was able to successfully express the AIP-I molecule and release it in media in its active form. The fluorescence intensity has dropped in presence of a very high concentration of AIP. This can be due to toxicity caused due to the high concentration of AIP.