This antimicrobial peptide is a bioengineered variant of Nisin A, produced naturally in Lactococcus lactis. Nisin A is a 34 amino acid peptide with Serine in the 29th position and Isoleucine in the 30th position. Mutation of Serine to proline at position 29 (S29P) combined with isoleucine to valine at position 30 (I30V) helps in making Nisin PV. Due to this mutation in the 29th and 30th positions Nisin PV is resistant to Nisin Resistance Protein (NSR) which is expressed on the cell surface of certain pathogenic strains like Streptococcus agalactiae, Streptococcus uberis. NSR is responsible for inactivating nisin by proteolytically cleaving the peptide bond between MeLan28 and Ser29 resulting in a truncated nisin (nisin1–28). Nisin PV also shows enhanced antimicrobial activity against Streptococcus uberis by inhibiting biofilm formation and decreasing its viability.

NisA gene is responsible for the production of the 57-amino acid long pre-peptide. This 57-amino acid comprises a leader peptide, cleavage of which produces a 34 amino acid long Nisin A protein. Nisin Resistance Protein (NSR) is a protein that is expressed on the cell surface of certain pathogenic strains like Streptococcus agalactiae, Streptococcus uberis. NSR is responsible for inactivating nisin by proteolytically cleaving the peptide bond between MeLan28 and Ser29 resulting in a truncated nisin (nisin1–28). NisinPV is a synthetically designed mutant of NisinA with the Mutation of Serine to proline at position 29 (S29P) combined with isoleucine to valine at position 30 (I30V). Nisin PV (BBa_K379904) shows enhanced antimicrobial activity against Streptococcus uberis by inhibiting biofilm formation and decreasing its viability. In the section below we have shown a comparative analysis of the stability of NisinA and NisinPV under the interaction of Nisin Resistance protein.

Interaction with Nisin Resistance Protein:The data in this section is adapted from the simulations by Field, Des et al. They carried out MD simulations to predict the difference in molecular dynamics of the NSR protein in its interaction with the nisin C-terminus (residues 22–34) for nisin-A and nisin PV models.
Molecular docking:We tried to replicate the setup used by Des et al. For the NSR (Nisin Resistance protein) molecule, the PDB file 4Y68 was used and for the Nisin the 1WCO PDB file was used. NisinA structure was mutated using PyMol and a PRO-VAL mutation was added to the 29th and 30th residue respectively. To determine a starting configuration for the NSR-nisin complex a docking program Autodock for ligand and protein binding was used where the Nisin (A/PV) was set as ligand and NSR was set as the receptor. We first performed the docking of NisinA with the tunnel region of NSR and selected the lowest energy stage as the starting configuration. The docs location was observed to be consistent with the ligand-binding site of Nisin as discussed in the literature. The ligand-binding site for NisinA was noted and NisinPV was docked using the same coordinates.
The free energies of the configurations obtained from docking are as follows: 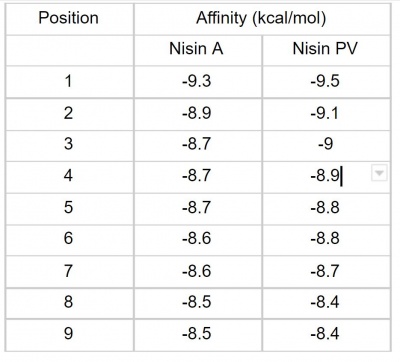 The 1st position is the best docking position for both molecules. Subsequent docking positions were also found by this study. This shows both Nisin A and Nisin PV docks similarly to NSR protein, which indicates that binding is not the mechanism by which NSR cleaves Nisin A. 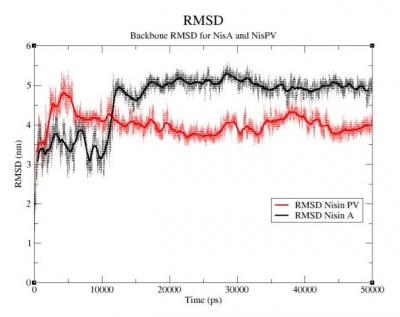 Initially, both models quickly deviate from their reference structure by approximately 3 Å (this happens over the course of the first 0.3 ns during the heating, equilibration, and the start of the production phase of the simulation). From then on in the simulation, the nisin A model continues to deviate until it reaches approximately 5 angstroms. In contrast, the nisin PV model exhibits different behavior. Although it too initially deviates further to almost 5 angstroms early in the simulation it then returns to just under 4 angstroms deviation from its reference structure and remains virtually constant for the rest of the simulation. 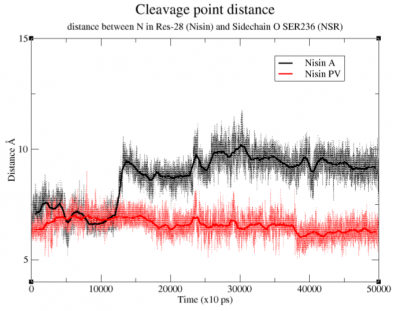 Hydrogen bond occupancy
These simulations revealed the hydrogen bond occupancy (defined as whether a hydrogen bond is present or absent at every frame over the duration of simulation) for all nisin residues greater than 20%. It is evident that the nisin PV model exhibits higher occupancy values than the nisin-A model for residues corresponding to the region 27-29. In particular, there is a hydrogen bond with 47.65% occupancy between the sidechain oxygen of proline in the nisin-PV model and the hydrogen from the nitrogen sidechain on residue 265 (asparagine) in NSR that may play a role in the inhibition of proteolytic cleavage for nisin PV.
Free energy per residue 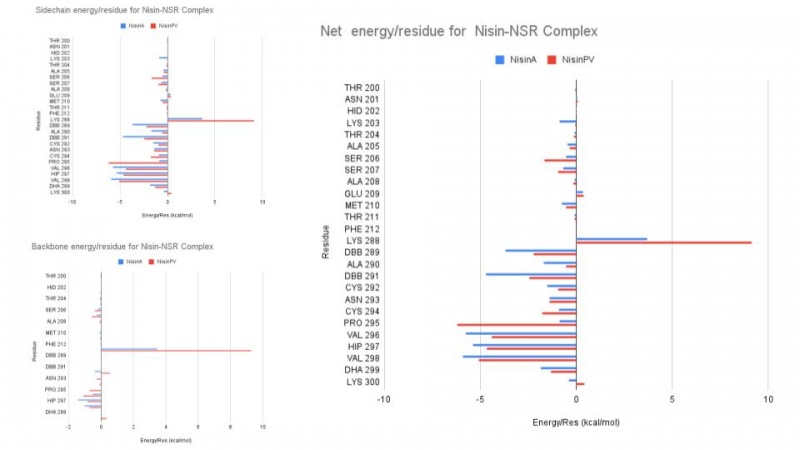 Analysis of the total binding energies for each residue in both nisin A and nisin PV models reveals that at the critical residue 29, the total energy for proline is seven times greater than serine (4.6292 kcal/mol for PRO and 0.8775 kcal/mol for SER).

Key takeaways
Considering the binding of Nisin(A/PV) to NSR, there is compelling evidence that NSR has a much more difficult time cleaving the bond at the 29th in the case of NisinPV.