Rfx Cas13d is a CRISPR/Cas effector that specifically binds and digests RNA based on its crRNA sequence. After digestion of this target sequence, Cas13d undergoes conformation change and presents collateral activity, it indiscriminately digests RNA molecules.

We ordered RfxCas13d protein gene from a syntheis company. We coloned the gene and ligated it into the pET-28a(+) using One Step Colone. And then we added 6xHis tag to the 5' end of the gene to construct the whole part.We transformed the ligation product into E. coli Rosetta(DE3) and confirmed the cloning by colony-PCR and sequencing. 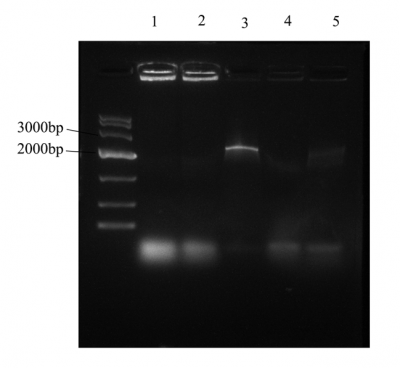 Because RfxCas13d protein was codon optimized,we expressed the protein in E. coli Rosetta 2 (DE3) . Expressed overnight at 16°C in LB medium under the condition of 1 mM IPTG. And as the sequence contains 6×His tags, we purified the protein through Ni-NTA agarose.The result is shown below.The molecular weight of RfxCas13d is 106.7 KDa. 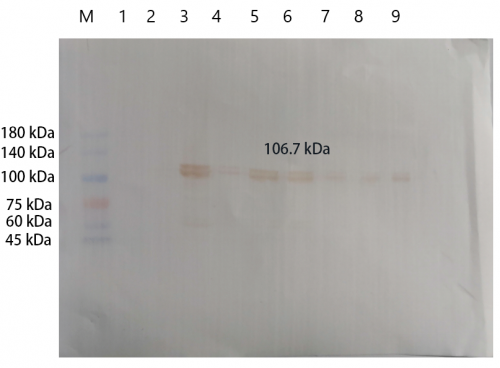 We test the activity of RfxCas13d by detecting the fluorescence. A kind of 6bp single strand RNA(5'-FAM UUUUUU 3'-BHQ1)is used as reporter in which the fluorescence of FAM can be quenched by BHQ1 to display its RNA endonuclease activity.When RfxCas13d is activated and cuts reporters, the cleavage of reporters will enable FAM to emit green fluorescence.We used ABI Step one plus real-time PCR to detect the fluorescence.We tested the kinetic curve of the protein to see the dynamic change of the flourescence.As shown in the figure , our protein shows considerable activity in cutting flourescence reporters.We can clearly see that after adding the target, the activity of the protein is greatly improved.The extracted RfxCas13d has ability to cut RNA compared to the control group.