Temperature and pH optimized endoglucanase I coding sequence from Trichoderma reesei with 6x His tag.

Yarrowia lipolytica is an emerging chassis in the molecular biology community. Its unique metabolic properties and efficient protein production and secretion mechanisms make it a desirable chassis for heterologous protein expression/secretion. In fact, it has been shown to have better secretory mechanisms than Saccharomyces cerevisiae (1). Therefore, using this chassis to secrete cellulase enzymes- which are enzymes that require high levels of secretion, is well suited.

EGs specifically are the most expressed cellulases in Trichoderma reesei while EGI has the most efficient hydrolysis on crystalline cellulose (2) The activity of endoglucanases is important to produce more exposed ends for exoglucanase or cellobiohydrolase activity. 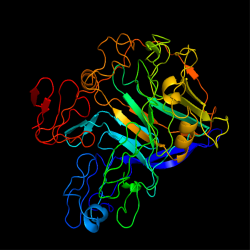 The native signal peptide from T. reesei was removed so it would not interfere with fused secretion tags native to Y. lipolytica


When developing the sequence for the modified TrEGI (also known as SEGI8), we first focused on the catalytic domain. We utilized the SEGI-8 modified domain as it has been proven to work with higher efficiency in a broader range of conditions (3). For the linker, we opted to move forward with the ApCel5A linker. The ApCel5A linker was selected due to its flexibility and length, which have been shown to enhance protein efficiency with a feedstock that contains lignin (4). Finally, the wild type Endoglucanase I cellulose-binding module was selected to ensure the synergy between the catalytic domain and binding module was maintained.

For the modified and wild type enzyme, we predicted the three-dimensional structure using homology modelling. From these structures, we completed molecular dynamic simulations. These simulations were then characterized by GausHaus to determine if the changes increased variance in the enzyme dynamics. The modifications actually had a net lowering of the variance in the enzyme allowing the team to move forward confident in the modifications.


This coding sequence was attached to the Lip2 signal peptide (BBa_K1592000), the TEFin promoter (BBa_K3629001), and the XPR2 terminator (BBa_K3629004) in creation of the expression construct for this part (BBa_K3629016). We provided the fully functional expression construct in our collection for teams who want to transform and use this protein directly in Y. lipolytica, however just the coding sequence is provided here in case teams want to use different promoters and/or signal peptides.

The expression constructs in our collection that can be assembled together to form a Y. lipolytica strain(s) that can fully degrade cellulose are:

A 6x HIS affinity tag was included in this part, however not for the purpose of purification in our project, but for use in ELISA and western blot detection by using antibodies specific to the tag. This presents a cheaper and more accessible option rather than acquiring an antibody specific to the entire protein. However, future teams may choose to use this tag in purification which may be necessary in further characterization experiments. A spacer with a thrombin cleavage site was included in case the tag interferes with the protein function. Furthermore, in case this protein is expressed in tandem with the other EG provided in our collection, we made both EGs have different affinity tags so they can be individually purified and detected as they have similar molecular weights.

Codon optimized for expression and function in Y. lipolytica.