This Biobrick consists of the E. coli PPK and two vacuolar import peptides for the moss Physcomitrella patens. The two parts are the plant specific insert and a specific signal peptide (Schaaf et al, 2003), which are responsible for protein import through the tonoplast into the vacuole. We translated the sequence into a nucleotide sequence using a codon usage table for P. patens and reduced the sequence of the biobrick BBa_K1807002 to the coding part of the protein. For application in the moss P. patens , we suggest the usage of the i2-10 promoter (BBa_K3583001), the ribosomal binding site of P. patens (BBa_M45214) and the nos terminator (BBa_K3583002). The composite part can be found under the id: BBa_K3583007.

To understand the function of secretion and vacuolar targeting in seedless plants, Schaaf et al compared different protein constructs by transient expression in P. patens . Figure 1 shows the expression of a constructs consisting just of the signal peptide and a GFP tag. Seven days after the transformation the fluorescence could not be detected in the vacuole so that one could conclude that the signal peptide itself is not responsible for vacuolar targeting. 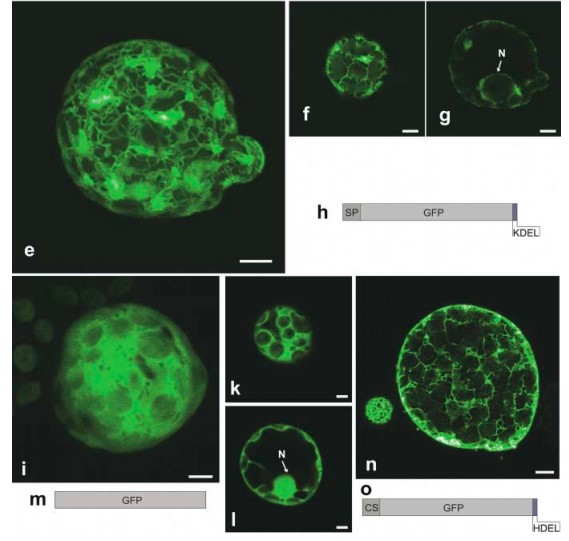 Fig. 1: Localisation of fusion proteins with secretory signal of PpAP1 fused to GFP expressed in P. patens. Observation of fluorescence started one to two days after transformation; e and i: three-dimensional reconstructions from confocal sections. f, g, k, l, n: Confocal sections.; pSPGFP, consists of coding sequence for the amino acids of the signal and the coding sequence for the GFP; pSPGFP is the same but with ER retention signal added to the c-terminus of GFP; 1e-g: pSPGFP-KDEL, expression leads to retention of GFP within the inner membrane system; 1h: pSPGFP-KDEL, construct with ER retention signal added to c-terminus of GFP; 1i: expression of GFP without signal peptide in the cytosol; 1k: like 3i; 1l expressed GFP in the cytosol without signal peptide enters nucleus; 1m: pGFP, construct without signal peptide as control; 1n: same construct like 1o; 1o: positive control for ER retained GFP from Arabidopsis thaliana where it is targeted to the ER by the secretory leader petide of A. thalinas basic chitinase; N: nucleus; Bars: 5 µm
figure from Schaaf et al, 2004 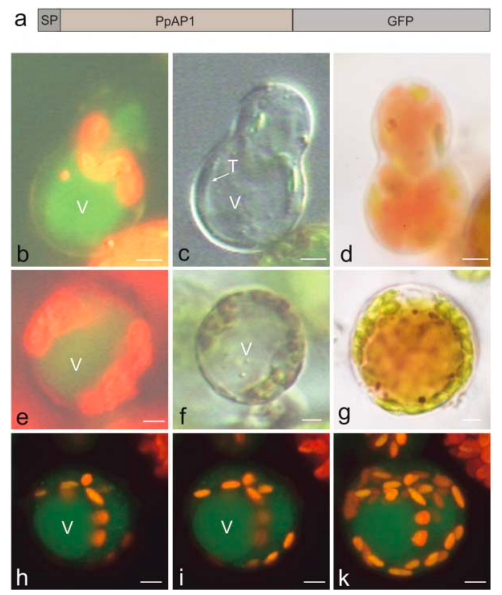 Fig. 2:Localisation of fusion proteins with PpAP1 fused to GFP expressed in P. patens. Fluorescence patterns were observed 7 days after transformation;PpAP1-GFP is the GFP-coding sequence fused to the 3’ end of the PpAP1-coding sequence; 2a: PpAP1-GFP construct; 2b and e: transiently transfected protoplasts (chloroplasts appear red due to autofluorescence of chlorophyll); 2c and f: same protoplasts like 4b and e but with differential interference pictures (DIC); 2d and g: Brightfield images of protoplasts stained with ER which accumulates in acidic vacuoles and turns red due to protonation; 2h-k: confocal pictures of protoplasts expressing PpAP1-GFP; h and i: Singlelayer scans. Bars: 5 µm
figure from Schaaf et al, 2004