This part was built to show that LuxI can be expressed under prma promoter, and to compare its expression under prma promoter with/without PFOS. prma promoter is found in Rhodococcus jostii RHA1 (UniProtKB - Q0SJK9) and regulates the transcription of prma, a gene producing a propane monoxygenase. In our project, we rely on this promoter for the detection of polyfluoroalkyl substances, a pollutant found in the Baltic Sea. LuxI is found in Vibrio fischeri (UniProtKB - P12747) and can produce 3OC6-HSL, a lactone that can be used as a signalling molecule for which the sender is LuxI and the receiver is LuxR. In our project LuxI is in E. coli, in the detector module, while LuxR is in Shewanella oneidensis, in the electricity output module.

In our project, part BBa_K3440005 is the final construct to insert in E. coli in order to detect the pollutant perfluorooctanoic acid (PFOS) in the sensing module. We added a myc-tag to the part in order to be able to characterize it by Western Blotting.

After heat shock transformation of the pSB1C3 plasmid containing the BBa_K3440005, we picked colonies from plates (Figure 1) and PCR amplified them with primers VF and VR2. 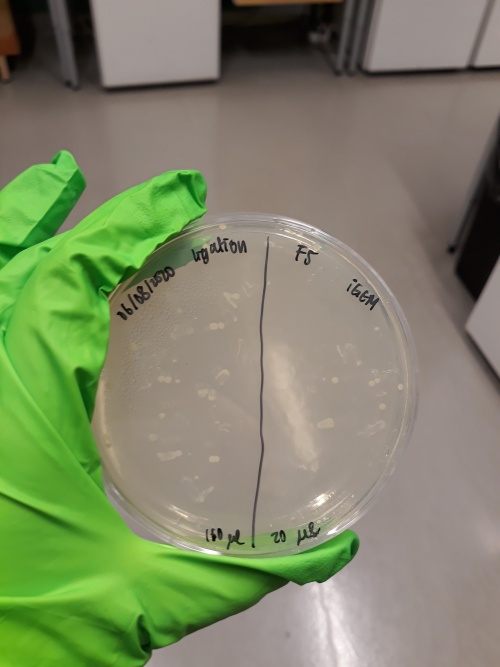 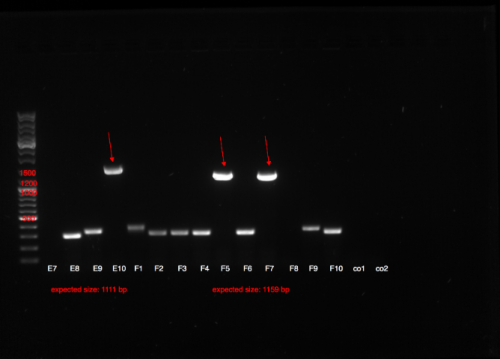 We therefore prepared plasmid preparations and glycerol stocks of those and sent them for sequencing to Microsynth AG. The sequence obtained corresponded to the expected part for F5, but not for F7, which contained a mismatch affecting the aminoacid sequence.

We then proceeded to characterize by Western blotting F5 thanks to the added myc-tag (Figure 3) in order to prove that PFOS could induce production of LuxI (and there signalling molecule 3OC6-HSL). The results did not show any expression of F5 either with our without the pollutants. This was not very surprising given the results obtained with BBa_K344002 in which mCherry could not be produced under induced prma. Our hypothesis is that mcuh bigger quantities of pollutant are needed to create a visible signal, thus this detection part should be improved and made more sensitive in the future.

We checked that a potential toxicity of the plasmid for E .coli was not the reason behind proteins not appearing on the Western Blot by making viability tests (see Figures 2-3 for the layout of controls and the plasmid respectively and Figures 4-5 for the results of controls and the plasmid). We made growth curves by measuring OD600 of E. coli containing the part and different concentrations of pollutants. A control E. coli TOP10 strain was used as a control (Figures 2 and 4) for comparison, as well as another pollutant that should not affect growth (1,1-dibiphenyl). It appeared that only the highest concentration, 10e-3M, of 1,1-dibiphenyl retarded the growth of E. coli. PFOS did not affect the growth of the culture, although the other pollutant did. We therefore concluded that this was not the reason why the band did not appear on the Western Blot.