Our team is developing a novel precipitation method using bacteria engineered with enzymes capable of producing the carbonate ions required for precipitation of calcium carbonate. Our chosen bacterial chassis is Bacillus subtilis due to the species natural ability to tolerate changes in pH [1]. Previously our supervisory team had identified 30 putative constitutive promoters from the genome of B. subtilis 168. They asked us if we wanted to investigate whether any of them were active and if so, if we wanted to use them in our project and of course we said yes! This promoter was found upstream of an open reading frame annotated as rho (transcriptional terminator) in the published genome sequence of B. subtilis 168 (NC_000964). We know it as promoter 15!

Using TypeIIs cloning we inserted the promoter upstream of the coding sequence for either AmilCP (blue chromoprotein) or MeffCP (pink chromoprotein) and transformed the resulting plasmids into E. coli DH5 alpha. After 24 h growth colonies containing the AmilCP gene appeared blue and colonies containing the MeffCP gene appeared pink (Figure 1), indicating that despite the promoter originating from B. subtilis, the promoter was active in E. coli. Interestingly unlike our first promoter BBa_K3371000, this promoter was able to drive expression from both CDS. 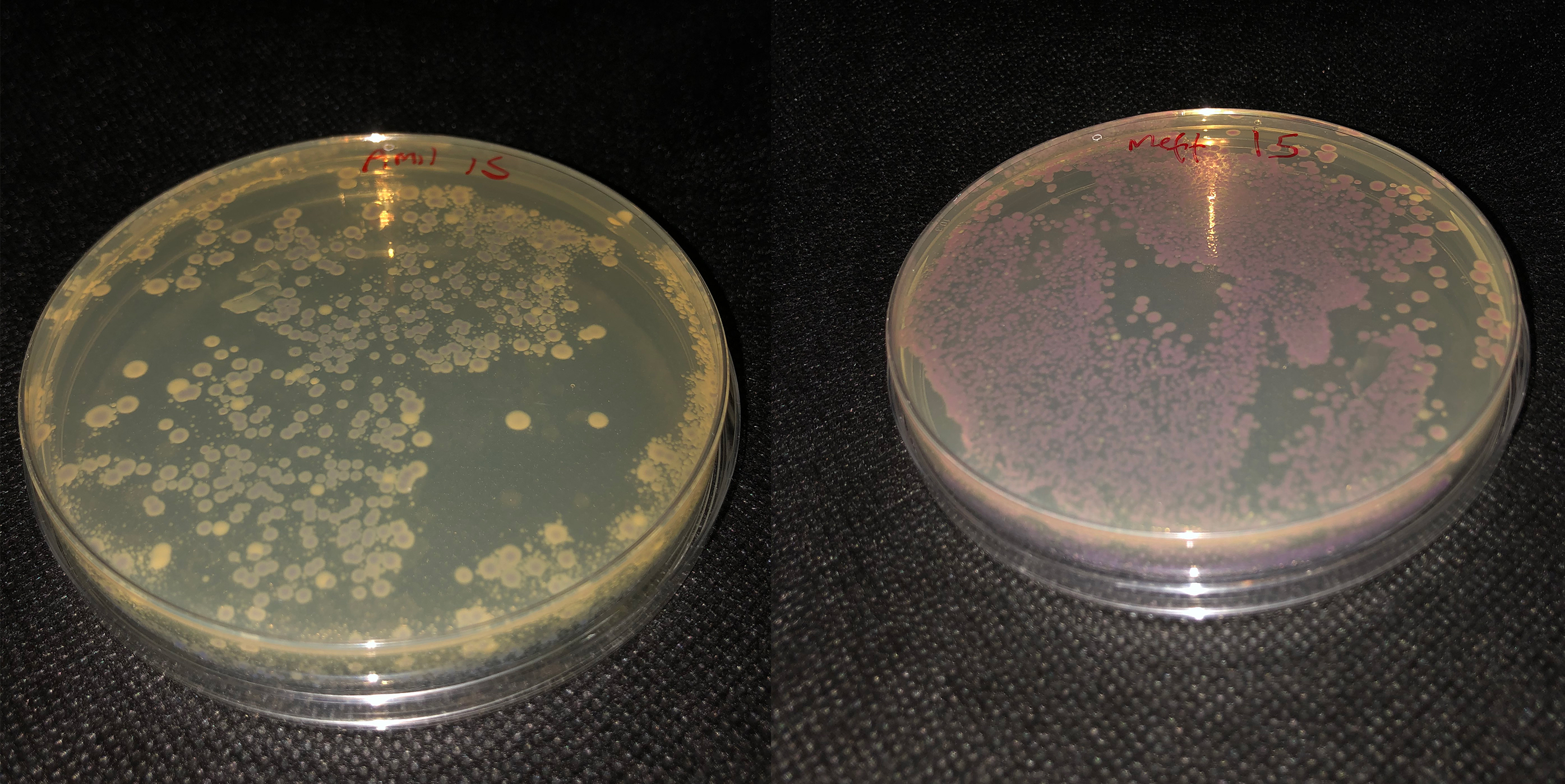 We picked three blue colonies from the AmilCP transformation plate and three pink colonies from the MeffCP transformation plate and used them to inoculate E. coli cultures (in LB broth). We monitored growth of the cultures (OD 600nm, data not shown) and expression of the AmilCP (A 420 nm, blue light region of the electromagnetic spectrum, Figure 2) or MeffCP (A 620 nm, red region of the electromagnetic spectrum, Figure 3) over 24 h. The graphs show that expression of both proteins occurs from the start of growth (in contrast to our first promoter BBa_K3371000). Exponential increase in absorbance for both proteins occurs until 7-8 h when max production is reached. Unfortunately we did not have time to investigate why expression of AmilCP and MeffCP varied between promoters. 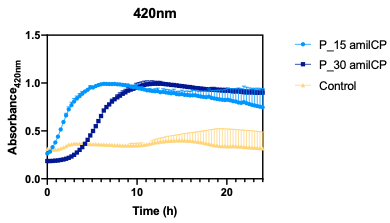 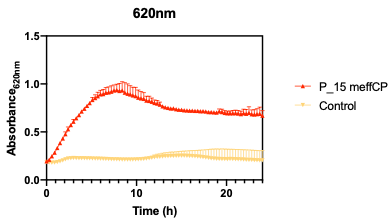 Unfortunately due to the COVID-19 pandemic and limited access to the lab we were unable to investigate whether the promoter was active in B. subtilis. We have contributed a constitutive E. coli promoter to the registry and we hope that future teams will be able to make use of this putative promoter in B. subtilis.