This part, also called EAD2 or EAD2+3’A, is one of the peroxidase-mimicking G-quadruplex DNAzymes with highest activity known in literature1. It has an intrinsic adenine at the 3’ terminus of its sequence, which is known to be of great importance to high peroxidase-mimicking activity of G-quadruplex structures. Here, we compare the activity of this DNAzyme with that of two other DNAzymes (BBa_K3343001 and BBa_K1614007) and report the molar maximum TMB conversion rate (kcat) and substrate affinity (Km) of this part.

The text and figures were adapted from team Leiden 2020’s scientific preprint2.


Different GQ sequences may have different enzyme-like activity. We compared EAD2+3’A with one of the most widely used DNAzymes among scientists (BBa_K1614007)1 and a DNAzyme highly similar to BBa_K1614007 but with an additional adenine base at the 3’ terminus (BBa_K3343001). We identified EAD2+3’A as the most potent DNAzyme in the used reaction conditions (phosphate buffer pH 6.0) (Figure 2). 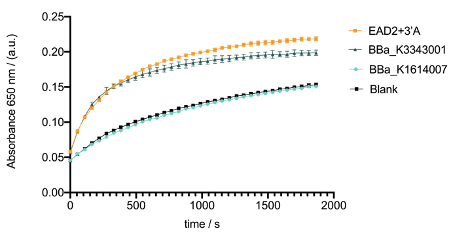 Characterization of EAD2+3’A catalytic activity was performed based on the DNAzyme’s ability to oxidize TMB in the presence of excess amount of peroxide and different concentrations of TMB. All reactions were performed in a pH 6.0 phosphate buffer. The rate of TMB oxidation was then monitored based on oxidized TMB’s absorbance at 650 nm wavelength (molar absorption coefficient is 39,000 M-1 cm-1)4. Kinetic parameters of the DNAzyme were described using the Michaelis-Menten equation (Eq. 1), with kcat and Km representing the molar maximum TMB conversion rate and TMB affinity of EAD2+3’A, respectively. The values of kcat and Km were calculated using multiple regression analysis by simultaneously minimizing the error of all measurement-simulation pairs. The approximated kinetic parameters of EAD2+3’A against TMB are shown in Figure 3, Figure 4, and Table 1. 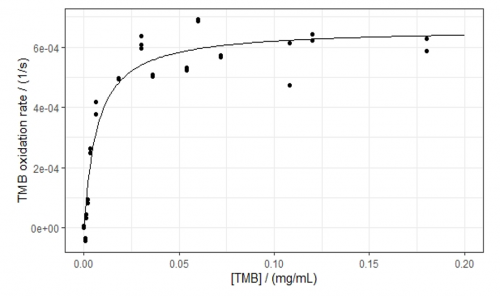 Figure 3. TMB oxidation by EAD2+3’A DNAzyme. Kinetic parameters of the DNAzyme were measured based on its ability to catalyze TMB oxidation reaction at different TMB concentrations. In the figure, data points represent initial oxidation rate measured from each experimental replicate while the curve represents model-predicted kinetics at each given TMB concentration. Rate kinetics of EAD2+3’A were assumed to follow Michaelis-Menten kinetics. The initial rate of each individual replicates was calculated based on differences in oxidized TMB absorbance value at 650 nm for the first minute of the observation. The resulting model could sufficiently describe each individual replicate measurement (Figure 4). 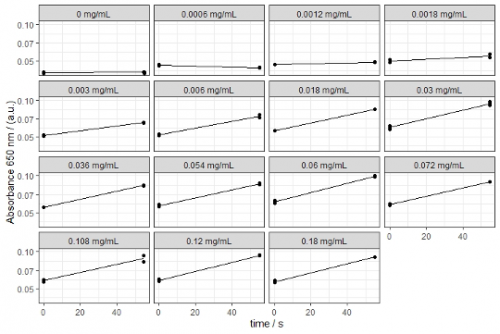 Figure 4. Predicted TMB oxidation kinetics by EAD2+3’A could sufficiently describe reaction rates of each individual reactions. The values above each figure represented TMB concentration used in each observation. Observations obtained from each experimental replicate were represented as data points. Reaction rate between each two observed time points were assumed to be constant and resulted to a linear increase in A650 value. Lines shown in the figure represent the simulated increase in A650 value over the observation period at a given TMB concentration, as predicted by the fitted kinetic model, and by using the average of each measurement replicates at time point zero as starting point of the simulation.

We compared this part, a peroxidase-mimicking DNAzyme named EAD2+3’A, with two other DNAzymes and showed that this part has highest activity in phosphate buffer pH 6.0. In addition, we determined the molar maximum TMB conversion rate (kcat) and substrate affinity (Km) of EAD2+3’A, which were 3.971 x 104 min-1 MDNAzyme-1 and 6.798 x 10-3 g L-1, respectively. The parameter values were implemented in team Leiden 2020’s empirical modelto assess the performance of the oxidation reaction and guide future optimization of our technique.