LacI is one of the genes in Lac operon encoding the inhibitor protein binding to LacO sites (cis-acting element). In response to IPTG, the inhibitor protein detaches from LacO (BBa_K3257066 http://parts.igem.org/Part:BBa_K3257066) and enables the transcription of downstream genes. We mutated some specific sites in the LacI gene to improve its sensibility to IPTG.[1] Using EGFP (BBa_E0040 http://parts.igem.org/Part:BBa_E0040) as a reporter, its fluorescence intensity appears a lower leakage and the same level of expression before and after the induction of IPTG. Also, we induce the improved Lac operon by arabinose to verify its orthogonal response to IPTG.

According to our experiment, our Lac operon is improved in the following three main aspects.

Cross talk between the response to IPTG and arabinose has been a defect of the wild type Lac operon. When 4mM arabinose added, a few lac inhibitors detach from lac operator which means that it is induced in a relatively low but unignorable level. According to the measurement of our experiment, our improved LacI can respond to IPTG with better orthogonality. The figure below (Figure 1) is the measurement of the fluorescence of EGFP controlled by wild-type and improved Lac operon. It shows that when 4mM arabinose is added, oLacI(wild-type LacI) is induced at a significantly high level while iLacI(improved LacI) is induced at a lower level. 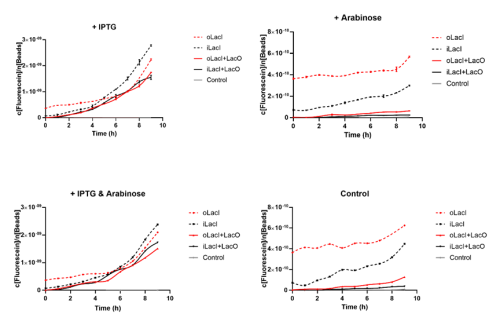 Figure 1. The expression level of EGFP controlled by different versions of LacI and inducers, or under different promoters.The origin point indicates the time when different inducers are added (1 mM IPTG and/or 4 mM Arabinose). The title of the graph shows which kind of inducer is added to the culture. The horizontal axis shows the duration of time, the vertical axis shows the quantified level of EGFP expression. The fluorescence level (excitation wavelength: 485 nm; detection wavelength: 528 nm) is quantified by the concentration of fluorescein, and normalized by the measured OD600 equivalent to the number of beads in the system. oLacI stands for the wildtype LacI, iLacI stands for our improved version of LacI. +LacO indicates that the promoter constitutes a LacO sequence. Control is the negative control plasmid which does not constitute an EGFP sequence. Error bar in the two graphs on the first row indicates the SEM of three replicates. The second row showed only the mean amount of three replicate. 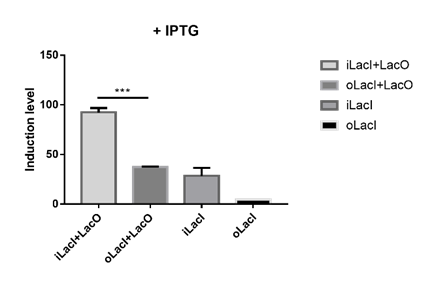 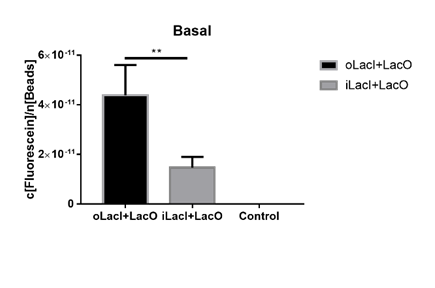