This part can be placed downstreamed a promoter. The leakage transcription of a Ptac promoter on a P15A ori plasmid was sufficient for the recombination of the att sites on low copy vectors.

The composition and principle of the experimental system

The two plasmids were co-transformed into E.coli DH5α host. Then we selected colonies with no observable fluoresce and inoculated into M9 supplemented medium for overnight growth. Then, the cell cultures were diluted 1000-fold with M9 supplemented medium with gradient concentrations of IPTG inducer and growth for another 20 hours. All incubations were carried out using a Digital Thermostatic Shaker maintained at 37 °C and 1000 rpm, using flat-bottom 96-well plates sealed with sealing film. Finally, the OD600 of each well was measured by a microplate reader. 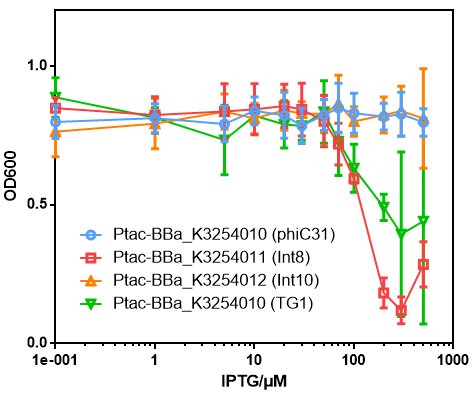 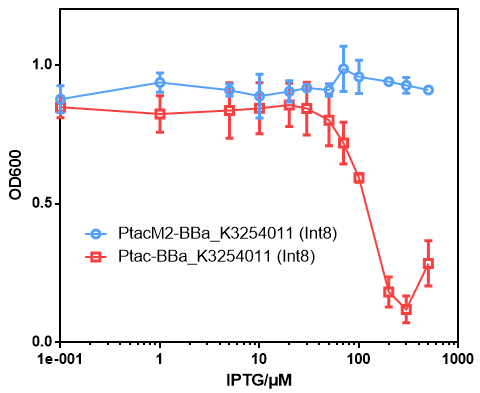 We conducted orthogonality tests to see the compatibility between the 6 integrase used in our project. The other integrases include phiC31, Int5, Int7, Int10 and TG1.

Similar to the design of thermodynamic characterization. Each integrase generator plasmid was co-transferred with 6 plasmid containing different sets of cis-elements.

The growth condition is similar to the thermodynamic characterization but the other samples were full induced with 500 μM IPTG. Then we used specific primers to identify the genotype of att sites by PCR. The principle of genotype identification was shown on the right of result image.

The results indicate that Int8 integrase has a good orthogonality with the other 5 att sites and compatible with other integrases. IBR-C35/F55/S37/E21/T25/G22 were the plasmids with phiC31/Int5/Int7/Int8/Int10/TG1 att sites.