Engineering Success Made by SZU-China 2021

SZU-China team has added quantitative experimental characterization data to an existing Part from the Registry of Standard Biological Parts and documented the experimental characterization on the Part's Main Page on the Registry. This year, We identified a glucose-sensitive promoter pt-αcrp(BBa_K3142012) that can express subsequent genes at low glucose levels to prevent bacteria from escaping to the outside environment. We added the mazF gene, which encodes an endoribonuclease that will be expressed to suicidal effect when glucose levels are low. We verified our system by inducing expression with different glucose concentrations and observing the survival rate of engineered bacteria and supplemented experimental data for the promoter. 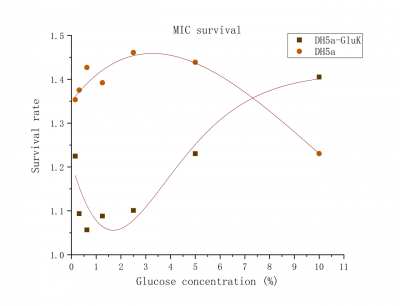 As shown in figure 1, compared with the control group, the growth of the bacteria transformed with the plasmids with the glucose-sensitive suicide switch was basically significantly inhibited, and the lower the glucose concentration in the environment, the more significant the inhibition effect was, and the lower the survival rate was reflected in the experiment. The contrast of the line chart shows the difference between the experimental group and the control group. Based on this, we believe that the glucose sensitive kill switch can work normally.