This part (BBa_K3132016) is a MAPK pathway-dependent synthetic receptor that targets SunTag peptide.

Generalized extracellular molecule sensor, also known as GEMS, is a highly generalizable synthetic receptor developed by Leo Scheller et al[1]. This receptor is generalizable because it could be adapted to sense a wide range of input signals and express genes as the users wish, which is important in cell-based diagnostic and therapeutic devices[2]. However, currently few of such receptors have been developed, and more or less they have some disadvantages such as high background, low adaptability and weak activity. A commonly used strategy of designing programmable receptors is to connect a transcription factor to the cytoplasm side of the transmembrane receptor. When the receptor binds its ligand, the intracellular transcription factor will be cut off by protease and activate downstream genes, which is a very simple mechanism but does not experience a signaling amplification (Figure. 1a). GEMS on the other hand, is rewired to native signaling pathways of the engineered cells (Figure. 1b), and will be expected to have a high signal/noise ratio. Another feature of GEMS is that it could sense soluble ligands, while many of the synthetic receptors are only able to detect immobilized molecules like synNotch [3-5] and chimeric antigen receptor (CAR). 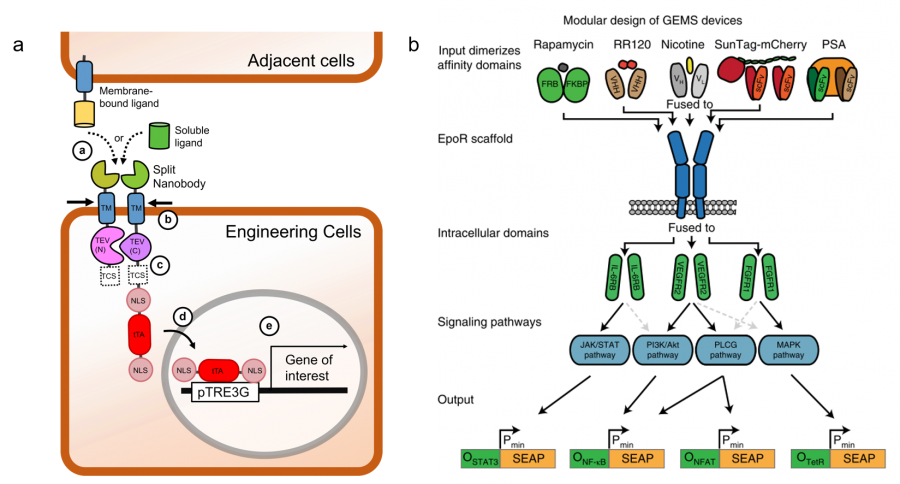 Figure. 1 Schematics of two kinds of synthetic receptors. a, TEV protease-based receptor developed by team NTHU Formosa 2018. The binding of a ligand will cause dimerization of the two subunits of the receptor and release of a transcription factor in the cytoplasm to activate user-defined genes. b, Generalized extracellular molecule sensor (GEMS). This platform can take advantage of various native signaling pathways in the engineered cells, such as JAK/STAT, MAPK, PI3K/Akt, and PLCG pathway.

Structure and Mechanism of GEMS:

GEMS is a dimer of two subunits of which the scaffold is derived from EpoR (erythropoietin receptor). GEMS can be combined with a wide rage of affinity domains as well as different intracellular domains for rerouting signaling to activate distinct endogenous signaling pathways[1]. In the previous paper, the authors rewired the receptors to four independent pathways (Figure. 1b), and these receptors could respond to various molecules of different molecular weights. This part (BBa_K3132016) is a MAPK-dependent GEMS that consists of an anti-Suntag scFV and a FGFR1 intracellular domain. Therefore, this receptor is designed to specifically respond to proteins fused with SunTag and to activate MAPK pathway. It is worth noting that the recognition domain and intracellular domain can be changed based on this part.

When the MAPK-GEMS recognizes its ligand, it will drive gene expression which is under the control of a 8×PIR minCMV promoter (BBa_K3132101) with a PIP-Elk1 fusion protein (BBa_K3132012). PIP-Elk1 is a synthetic transcription which is composed of a PIP DNA binding domain and an Elk1 domain. The PIP domain helps the transcription factor bind to the promoter while The Elk1 activates targeted gene after being phosphorylated and MAPK. So, these two parts BBa_K3132101 and BBa_K3132012 must be co-transfected with MAPK-GEMS.

This year, we used IL-15-SunTag proteins as the ligands of our GEMS. SunTag is a peptide tag which can recruit multiple copies of an antibody-fusion protein[6]. So, here we used SunTag as the binding site of GEMS and used its antibody as the recognition domain of the receptor. Considering the number of repeat of SunTag will have impact on the receptor’s response activity, we constructed three different IL15 proteins fused with 2×, 4×, and 6×SunTag, respectively. These proteins were expressed by E. coli and purified for GEMS characterization experiments (Figure. 2). Concentrations of the proteins were measured by a human IL-15 ELISA kit. 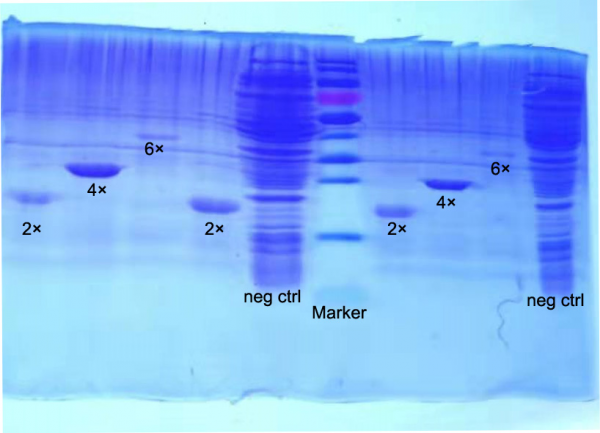 In our first experiment, we aimed to determine whether GEMS could be expressed and move to cell membrane. We fused eGFP to the C-terminus of GEMS, so that the receptor could be traced by the green fluorescence. Twenty-four hours post-transfection, the cells were observed under a fluorescence microscopy (Figure. 4). As is shown in the picture, HEK293 successfully expressed GEMS. However, most of the receptors localized inside of the cells and only a small proportion moved to the plasma membrane. 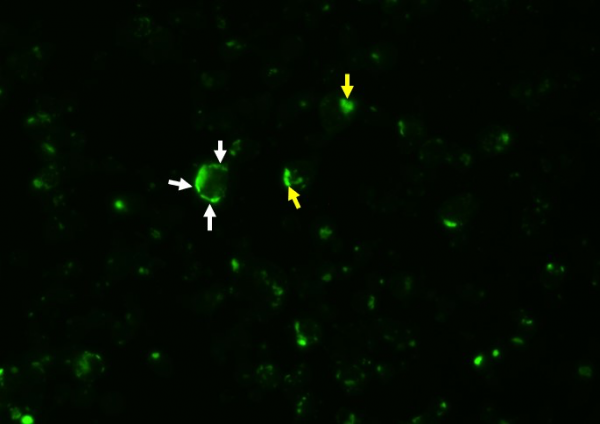 As is mentioned above, this GEMS we constructed is targeted for SunTag. We anticipated that the number of SunTags in a protein would influence the activity, because the length between the two binding sites within a molecule would cause different conformational changes in the receptor. We used mCherry (BBa_J06504) as the reporter and connected it to the 8×PIR minCMVpromoter(BBa_K3132101). The cells were co-transfected with GEMS, reporter plasmid, and PIP-Elk1, and were added with the IL-Suntag proteins 24h post-transfection. Eighteen hours later, the mCherry fluorescence intensity was measured. Intriguingly, among the three ligands, only 6×SunTag showed significant activating effect (Figure. 4a). This phenomenon probably because enough length is required between the two binding sites within the ligand to activate the dimerized receptor, or because more repeats of SunTag increased the probability of binding between receptors and ligands. The receptor showed around 3.2-fold change at the concentration of 100ng/ml compared with negative control. However, weak fluorescence could be observed in the negative control, suggesting that this receptor possessed a low background activity (Figure. 4b). 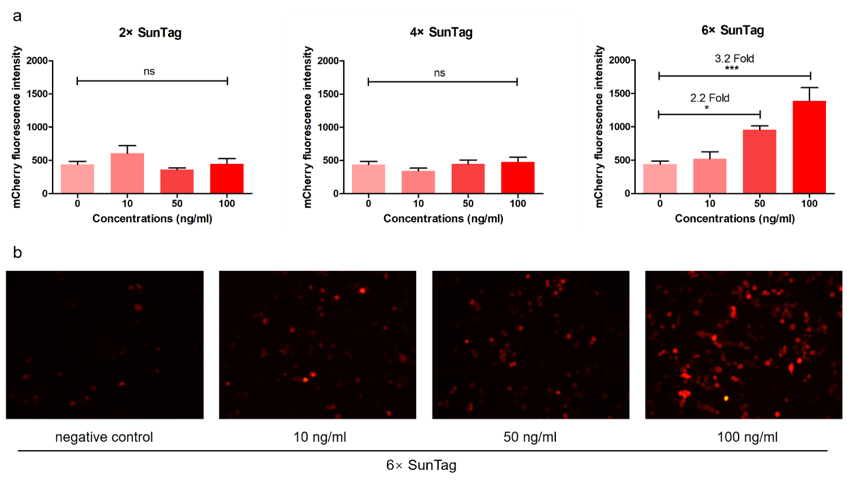 Figure. 4 Response of GEMS to three ligands. a, Compared with 2× and 4×SunTag proteins, GEMS only responded to the 6× ligand in a concentration-dependent way. b, mCherry expressed by cells at different 6×SunTag concentrations.***P<0.001, *P<0.05

GEMS is a useful and promising tool in mammalian designer cells with the ability to sense extracellular cues. Here, we only characterized the MAPK-dependent GEMS while there are other signaling pathways that can be rewired to by changing the intracellular domain. In our project, we planned to find a receptor that could respond to upstream synthetic biomarkers in the blood which are tagged with artificial antigens such as SunTag, Flag, and c-Myc. With these synthetic biomarker – receptor pairs, we hope we could realize intercellular communication in mammal cells in a non-contact way, which is like the endocrine system, and could develop more complex multicellular systems in the future. However, because of time limitation, we only performed experiments on SunTag.