Expression of CgMT driven by T7 promoter under LacO regulation

This composite part was used to express the Corynebacterium glutamicum metallothionein gene (CgMT) in BL21(DE) E. coli strain. The expression of CgMT showed an increase in the copper absorption ability in E. coli and the result suits our purpose of creating a bacterial absorbent of metal pollutants in the liquid medium.

Metallothioneins (MT) are proteins made of 61-68 amino acids with a small molecular weight. It is found in almost every known organism, from bacteria to humans. Due to this ubiquity, it minimizes the gene toxicity effect when we choose it as the ectopic expression target.

MT contains many cysteine groups which were reported to be responsible for chelating a wide range of metal ions such as cadmium, lead, copper, and mercury, etc. Nevertheless, MT from different species showed different affinity towards different metal ions.

Literature reported that MT protein from Corynebacterium glutamicum (CgMT) shows strong binding affinity towards divalent cations, such as Zn2+ and Pb2+. [1] Since our project used Cu2+ as a model for the metal pollutants, we decided to explore the plausibility of using CgMT to increase the metal accumulation ability of E. coli.

The E. coli expressing CgMT was put into copper (II) sulphate-containing medium. The concentration of copper ions in the medium was measured at different time points. API copper testing reagent was used in this assay. The reagent reacts with copper ions and forms brown colour precipitate. We used a colourimeter to measure the absorbance (440nm) of the reagent mixture and calculate the concentration of copper ion by a standard curve. (Fig. 1) 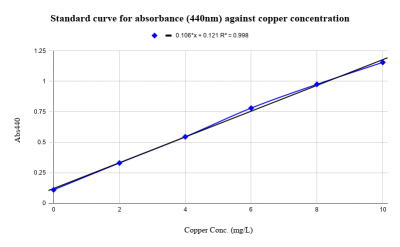 We found that when compared with no IPTG induction control group and empty vector control group, the CgMT gene -expressing group removed significantly more copper ions inside the medium after 4 hours of incubation. (Fig. 2) This result indicates CgMT gene expression can effectively increase the copper absorption ability of E. coli and it serves the aim of our project which we tried to increase the metal pollutant removal ability of E. coli. 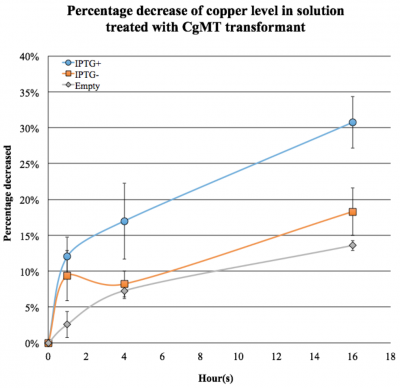 Fig. 2 The CgMT-expressing group removed ~30% of copper ions in the medium when compared with controls removing only ~12 - 15%.

Our team developed a Bacterial Copper Adsorption Device (B-CAD) that can utilize the metal absorption property of the E. coli to remove copper in a fish tank or aquaponic tank. The device mainly relies on the differentially permeable property of the dialysis tubing so that the E. coli can be trapped inside of the tubings whereas the metal ions can pass through the membrane freely. (Fig. 3 and 4) 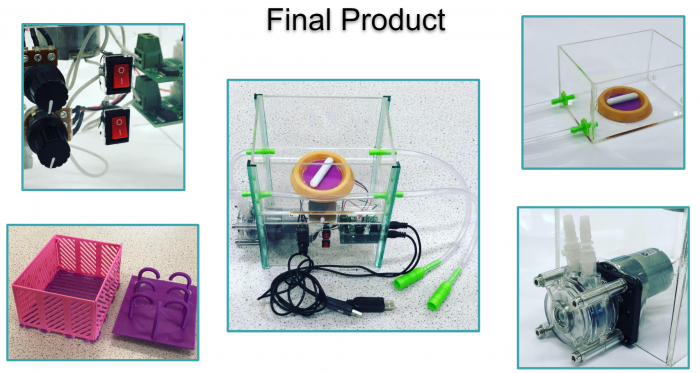 Fig. 4 The mini-version of the B-CAD we constructed.

We tested the device with actual aquaponic water added with copper (II) sulphate. (Fig. 5) Actual aquaponic water contains the nutrients that E. coli needed and no extra nutrient broth is required for the growth of the bacteria. Therefore, in practical situation, the cost of growing our CgMT expressing E. coli would be minimized. 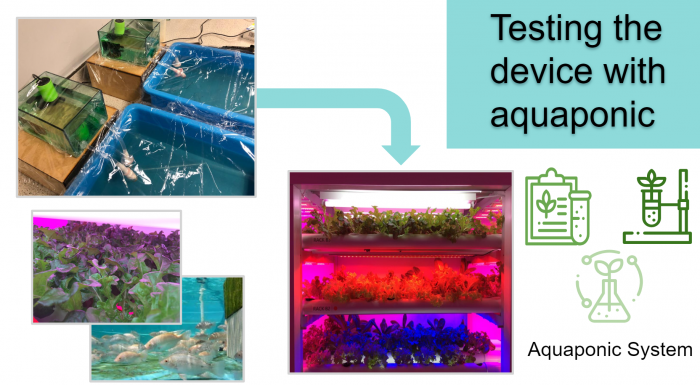 Fig. 5 Testing the copper removal ability by our B-CAD.

The copper removal effects of the B-CAD were studied with different variables. (Fig. 6, 7 and 8) 50 mL of CgMT-expressing E. coli was put into the B-CAD and used to filter 5 L of aquaponic water with copper (II) sulphate added. The results showed that our B-CAD system could remove ~25% and ~38% of the copper inside the water after 24 hours and 48 hours respectively. 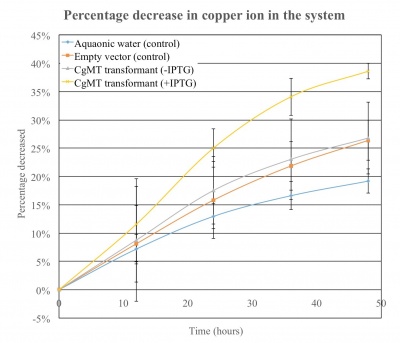 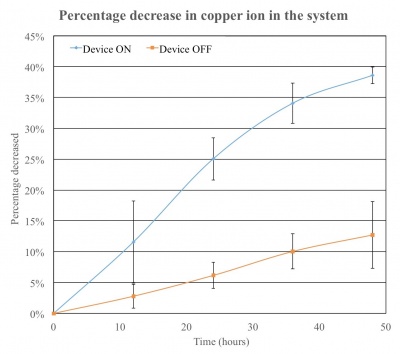 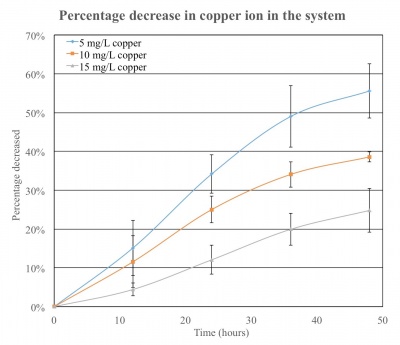 In this project, we also studied the effect of knocking out copper exporters in E. coli to see if the copper absorption in the organism will be increased. We found that by knocking out cusF gene, the KO strain significantly removed more copper in the medium when compared with the control group. (BBa K3076500) Thus, in the next step, we will combine two modifications together to see if it can further improve our metaL pollutant removal system.