FadD is one of a regulatory enzyme in fatty acid biosynthesis in E. coli. , which is in charge of acetylating the fatty acid and produce a molecule, acetylated-fatty acid, that initiates promoter, pFadBA, to initiate the whole gene expression. We obtain the sequence of FadD directly by cell disruption of E. coli MG1655. After obtaining FadR, we further combine it with the promoter R0010 and a strong RBS B0030.

Characterization of fadD & fadL by BUCT 2021 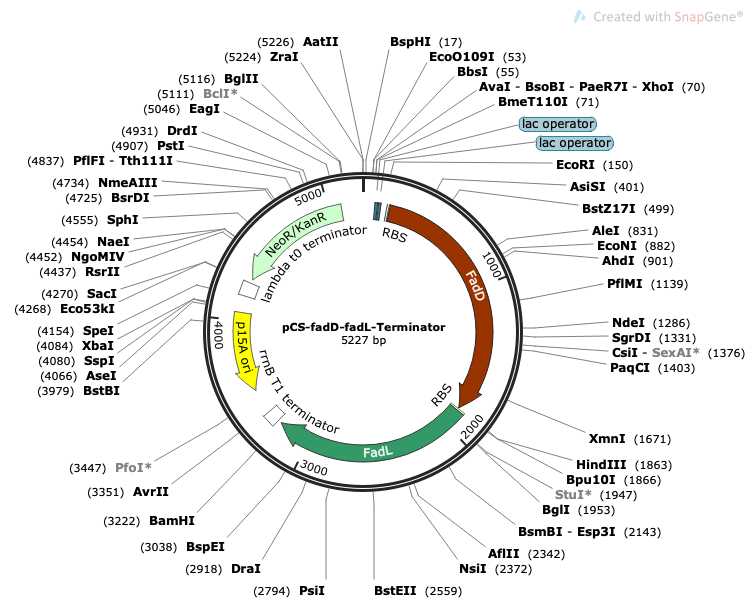 PCR amplification technique was used to obtain the endogenous fadL and fadD of E. coli, then cut the two genes from the double strands. We use EcoRⅠand HindⅢ to cut the FadD, using BamHⅠand Bpu10Ⅰto cut the FadL. Last, we link the FadL and FadD by enzyme ligation method.

We configure the Gas Chromatograph test group: 200µl fermentation broth (obtain 20g/l palm oil), 2000µl petroleum ether-diethyl ether, 100µl methanol-KOH. From the chart, we can see the amount of palm oil is decreasing, and it proves this composite part can enhance the decomposition of fatty acids by beta oxidation in E. coli.

FadD, which is also called acyl-CoA synthetase , catalyze the formation of a thiol ester bond between the fatty acid and the thiol group of coenzyme A. This condensation with CoA activates the fatty acid for reaction in the b-oxidation pathway. The reaction is accompanied by the hydrolysis of ATP to form AMP and pyrophosphate. The overall reaction has a net DG°9 of about 20.8 kJ/mol, so the reaction is favorable but easily reversible. However，the pyrophosphate produced in this reaction is rapidly hydrolyzed by inorganic pyrophosphatase to two molecules of phosphate, with a net DG°9 of about 233.6 kJ/mol. Thus, pyrophosphate is maintained at a low concentration in the cell (usually less than 10 mM), and the synthetase reaction is strongly promoted. The mechanism of the acyl-CoA synthetase reaction is shown in Figure 1 and involves attack of the fatty acid carboxylate on ATP to form an acyladenylate intermediate, which is subsequently attacked by CoA, forming a fatty acyl-CoA thioester. 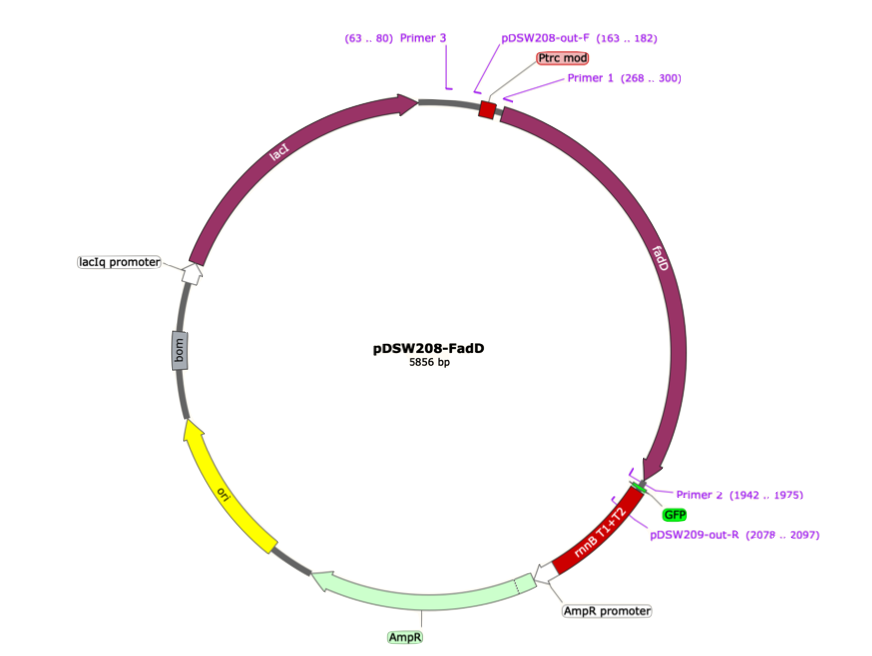 In order to explore the reasons for the failure of the experiment, we detected the protein expression more carefully. After inducing the expression of FadD proteins, they were purified by Ni2+ affinity chromatography column. After purification, SDS-PAGE results showed that the molecular weight of our target band was about 20 kDa lower than our predicted value. It is speculated that the engineering strain we used is E. coli DH5 α. The endogenous protease system of this strain has not been artificially knocked out, so the overexpressed protein is easy to be degraded. Considering this possibility, we replaced our engineered strain with E. coli BL21 strain. Then we purified the protein by Ni2+ affinity chromatography column and detected it by SDS-PAGE. The results showed that the bands of FadD protein were in line with our prediction.

While conducting our own experiments to explore the optimal protein expression condition, we sought the help of Ailurus biotechnology and asked them to help us design the best expression vector of FadD protein. Their scalable pipeline enables an ultra-high throughput assay of soluble protein yields under different vectors, with much lower costs than typical lab works.
The construction results of the best FadD protein expression vector are as follows： 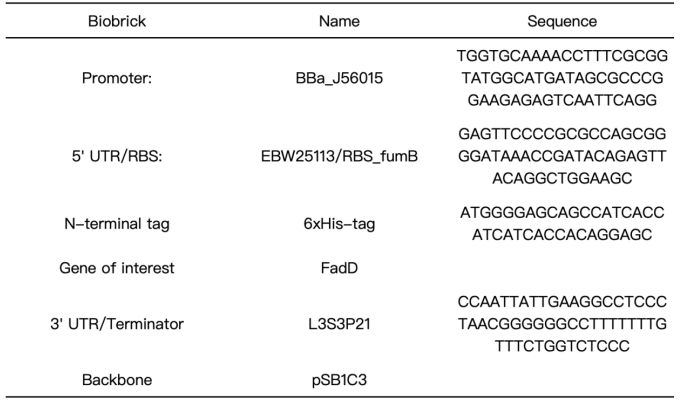