CRISPR Cas12a system is one of the bacterial adaptive immune systems. Cas12a protein is the RNA-guided enzyme that binds and cut DNA. When Cas12a protein bind with the specific crRNA, it will be activated. After Cas12a protein is activated, it will cut the target DNA as well as non-specific single-strand DNA (ssDNA), this certain function is used in our project. We designed six crRNA which is derived from the African swine fever virus (ASFV) to detect the DNA of the virus. This sequence is just a part of DNA sequence of the vp72 membrane protein of ASFV.

Expression of LbCas12a protein: We transformed pHMT-LbCas12a into E.coli BL21, and then added 0.2 mM IPTG to induce protein expression (see notebook for details). The result showed that the LbCas12a protein expression in soluble fraction was induced by IPTG, and increased as time goes on (Figure 1). The predicted protein size of LbCas12a with MBP and His-tag is about 180 kDa, which is close to the induced protein indicted by red arrow in figure 1. We also examined the insoluble fraction of IPTG induced BL21 by SDS-PAGE, and confirmed that most LbCas12a protein was soluble (Figure 2). 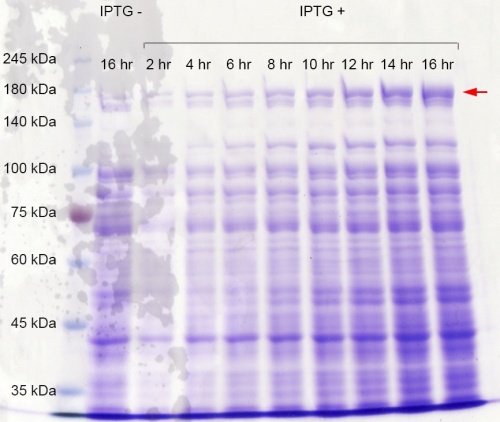 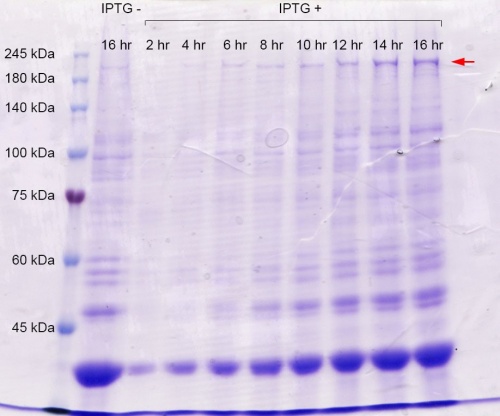 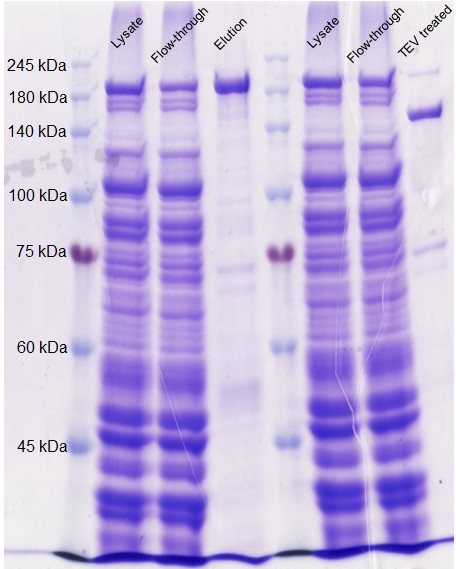 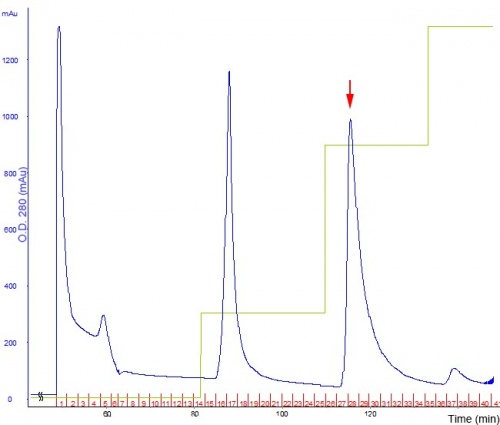 Fig 4. Chromatogram of LbCas12a purification by Ni2+ chelating sepharose column. The numbers shown in red indicate the fractions. Each fraction collect 5 ml of wash or elute. 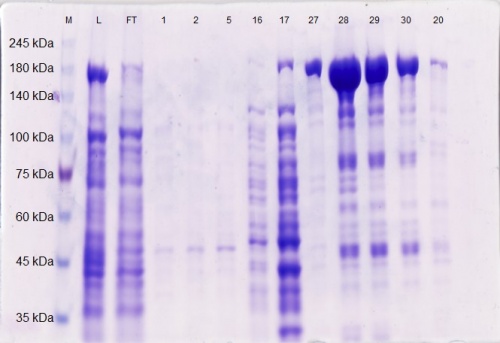 Usage, Biology and Characterization
ARIA’s biosensors are based on two main elements: the endonuclease enzyme LbCas12a from Lachnospiraceae Bacterium, and the crRNAs designed specifically to target antibiotic resistance (AR) sequences. Once the two elements bind and the target is detected, a fluorescent signal is activated due to LbCas12a cis cleavage activity. However, these elements have been implemented on living E.Coli (BL21), and become active after lysing the cells and being put in contact with AR sequences. This has given rise to a new innovative approach: the in vivo – in vitro detection.

To do so, the original plasmid employed for cloning Cas12 was taken from (Addgene), and it was optimized by deleting purification sites and unuseful sequences codifying for MBP (Maltose Binding Protein). Cas12 is expressed under the T7 promoter so that it is inducible with IPTG, and it has ampicillin resistance to allow for its selection.

5 gRNAs were designed in total, each of them targeting the following resistance genes: Ampicillin, Chloramphenicol, Erythromycin, Kanamycin and Spectinomycin. Each gRNA is constituted by a common sequence of the structure DR + 24 bp-spacer + DR + L3S2P21 terminator. The spacer sequence is followed and preceded by a DR since Cas12 cuts the pre-crRNA 4 nucleotides upstream of the hairpin structures formed by the DR. This is important considering that Cas12a can process its own gRNAs (CRISPR RNAs) because of the dual RNase/DNase activity of Cas12a.

We used the Substrate Nuclease Detection System to perform detection and subsequent fluorescent measurements with the Plate Reader. To give a glimpse of the results we obtained, we present the analysis of a detection graph from the Chloramphenicol gRNA efficient construct. The fluorescence results for BBa_K2927005 + BBa_K3791021 (Cas12a + gRNA for Chloramphenicol resistant gene) in Fig. 6 range between 26031 and 21607 RFU and are coherent since the one with sample needs to be higher due to the gRNA - sample sequence match. The decrease in fluorescence signal is only 16.99% over 2 -hour time, which indicates a maintained stability of the signal. The biological significant negative control (without sample) produces a signal which is 38.1% lower in RFU than the one given by the biosensor with its corresponding sample. It ranges between 16118 and 14461 RFU. This is attributed to the nuclease activity released from the lysis process. In both cases, the fluorescence is much higher than in the blank (negative control with water), a fact that is consistent. These results confirm our engineered biological system serves as a biosensor and accomplish the purpose for which it was created. 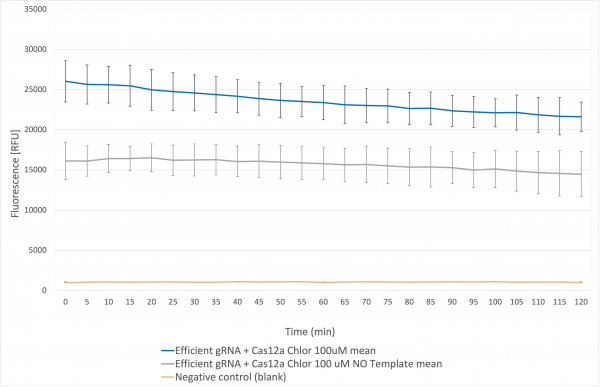 The improved version of this part is part BBa_K4053001

The LbCas12a-RVRR has a more varied PAM, achieved by introducing the mutations at the analogous positions of the RVR and RR variants of LbCas12a. As the trans-cleavage activity of the LbCas12a-RVRR was not characterised, we decided to test its activity to detect point mutation. We detected the same target (BRAF V600E) and we managed to further improve the sensitivity for the same target mutation detection. We made several mutations for WT-LbCas12a plasmid and managed to purify the LbCas12a-RVRR. We also tested it in the FQ Assay and found out that it can better differentiate mutant: wild-type template, hence providing higher sensitivity for snip detection.

After complexing WT-LbCas12a and LbCas12a-RVRR to the gRNAs, we tested their detection performance against BRAF-V600E by using the FQ (Fluorophore-Quencher) reaction and recorded the fluorescence signal. 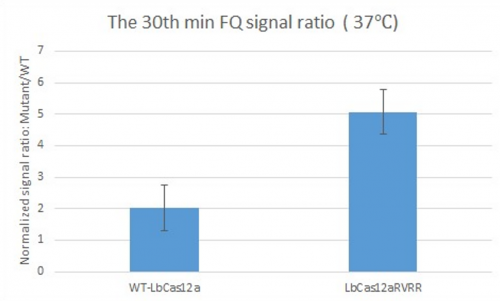