To demonstrate that our BiFC system works, we carry out a series of experiment.

Firstly, to prove it preliminarily, we implement experiment in E. coli BL21. To begin with, we transfect E. coli with plasmids carrying BBa_K2886013 (leucine zipper + nECFP) and BBa_K2886012 (leucine zipper + cECFP) respectively. Because of the existence of leucine zipper, which can bind with each other due to electrostatic attraction automatically without out outer-membrane and transmembrane domain or ligand. Then, when they express enough cECFP and nECFP, we lyse the bacteria with ultrasound and mix them up to emit cECFP and nECFP to a same system. At last, we measure the fluorescence with plate reader compared with negative and positive controls. The Figure 1 shows that our attempt does succeed and it might be reliable for more complicated conditions. 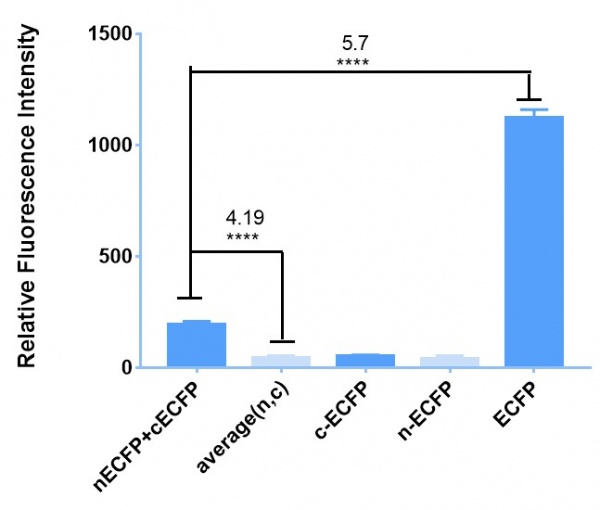 Figure 1: The sketch map of BBa_K2886013 & BBa_K2886012 and the result of their interaction in E. coli induced under 4 ℃. (a) BBa_K2886013 & BBa_K2886012 can bind with each other through the electrostatic attraction of leucine zipper and emit fluorescence. (b) The background fluorescence of nECFP , cECFP and their average value (average(n,c)). Fluorescence emission of the mixture of nECFP and cECFP shows a 4.19 folds of intensity. And the original ECFP shows a 5.7 folds of intensity compared to original ECFP (BBa_E0020), exceeding the less than 10-fold result reported in literature. （Y-axis represent the relative fluorescence detected by the microplate reader. All of the relative fluorescence are collected with the gain:50.）

Moreover, to further demonstrate the reliability of our BiFC system, we also do some similar things in 293T cells. The difference is that we add outer-membrane and transmembrane domain to it as well as substitute the leucine zipper with GS linker. We transfect the cells with these plasmids and then induce them with the ligand VEGF. When we observe the cells under fluorescence microscope, we also see the fluorescence, which is showed in Figure 2.

Through these two experiments, we fully demonstrate that our BiFC system works and prove the improvement of BBa_E0020 is a success. And BBa_K2886004 & BBa_K2886005 can used as labels for interaction of two target proteins and the location of two proteins in subcellular level, tremendously expanding the usage of the original part and equipping iGEMers another powerful tool for biological visualization.

Improvement on a previous part

In 2004, ECFP(engineered cyan fluorescent protein derived from A. victoria GFP) was introduced to iGEM by Antiquity in Part:BBa_E0020. Since then, it has had more than 80 uses. This year Fudan-CHINA improves it by taking it apart using BiFC (bimolecular fluorescence complementation) to tremendously expandthe usage of the original part Part:BBa_E0020. With improved parts, you can use them as labels for interaction of two target proteins and the location of two proteins in subcellular level.