There are 2 classes of effectors in the microbial adaptive immune system; class 1 effectors utilize multi-protein complexes, whereas class 2 effectors rely on single-component effector proteins such as the well-characterized Cas9. Cas12a (Cpf1) is a putative class 2 CRISPR effector which mediates robust DNA interference with features distinct from Cas9. Cpf1 is a single RNA-guided endonuclease lacking tracrRNA, and it utilizes a T-rich protospacer-adjacent motif. Moreover, Cpf1 cleaves DNA via a staggered DNA double-stranded break. We chose Lachnospiraceae bacterium ND2006 Cpf1 (LbCpf1) -along with Acidaminococcus- because it was found to have efficient genome-editing activity in human cells. [4]

Cas12a recognizes and cleaves the target sequence of dsDNA depending on the target sequence and the T-rich PAM sequence. At this time, Cas12a exhibits collateral cleavage activity that indiscriminately cleaves the surrounding ssDNA. [1] CRISPR-AIOD assay, in which two different gRNAs are added, can improve the sensitivity. [2] The improvement of sensitivity by adding two different gRNAs has also been confirmed by an assay using Cas13a. [3]

Generally, in assays using a single gRNA, Cas is activated by the binding of a single Cas-gRNA complex to a single target DNA molecule. On the other hand, when two different gRNAs are introduced, two Cas-gRNA complexes bind to a single target DNA molecule, resulting in the activation of two Cas molecules. Since the number of Cas molecules activated per target molecule is doubled, sensitivity is expected to be improved [2], [3].

In the Cas12a-based CRISPR-AIOD assay, two target sequences are first set up on the DNA to be detected as targets. Different from the usual gRNA design, these two sequences are not restricted by the PAM sequence, but they must be close to each other. Next, two types of gRNAs are designed based on the set sequences, and primers that can bind upstream and downstream of the two target sites are designed. Finally, by adding the designed two types of gRNAs and primers together with recombinase polymerase amplification (RPA) reagent for target DNA, one-pot and highly sensitive detection becomes possible. As a result of introducing two types of gRNAs, it has been reported that a lower copy of DNA can be detected than when a single gRNA is added. [2]

When designing a gRNA with Cas13a, two target sequences on the RNA to be detected are set in the same way. In contrast to Cas12a, which does not require PAM to be taken into account when designing, in Cas13a, both gRNAs to be designed are restricted by protospacer-flanking site (PFS). Studies have shown that simultaneous introduction of the two designed gRNAs and Cas13a is possible even with low-copy RNAs, and the amount of signal detected per time has been improved. [3]

Part information is collated here to help future users of the BioBrick registry.

Usage of the Cas12a enzyme may be integrated with lateral flow assay technology, alongside recombinase polymerase amplification (RPA). Using FAM-Biotin probes, a visible readout determining the presence of a gene of interest via a lateral flow assay can be achieved. The detection of RPA amplicons by gRNA/Cas complexes subsequently results in the activation of the Cas12a enzyme and commences the collateral trans-cleavage of FAM-Biotin (6-FAM/TTATTATT/Biotin) oligos, which are single-stranded DNA (ssDNA) probes, as Cas12a orthologs from the Lachnospiraceae family of bacteria (LbaCas12a) display non-specific collateral cleavage activity to ssDNA, post-detection of a gRNA-designated double-stranded DNA (dsDNA) target. [1] 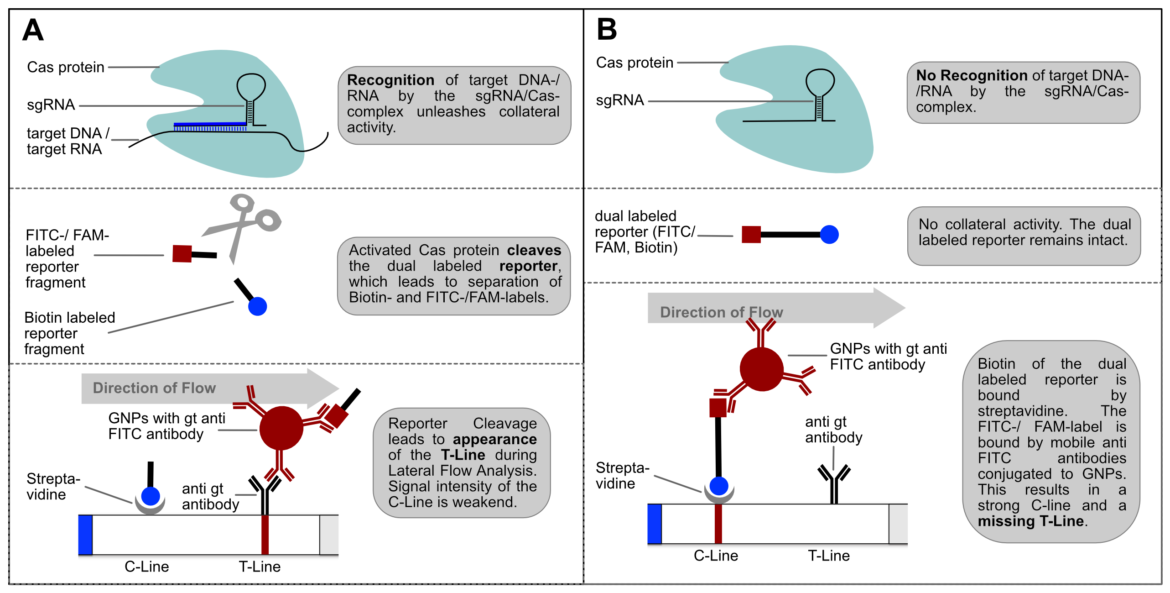 CRISPR Cas lateral flow assays use a reporter degradation strategy with the control ‘C’ line before the test ‘T’ line (a reversal compared to “standard” LFAs). When no CRISPR cas12a cleavage has occurred, gold nanoparticles conjugated to rabbit/goat anti-FAM antibodies bind to the uncleaved FAM/Biotin probes. These probes are immobilised at the control line as the biotin end binds to the Streptavidin tetramer present on the lateral flow strip, a natural protein-ligand interaction. When the FAM/Biotin probes have been cleaved the gold nanoparticles conjugated to the FAM end of the probe are free to flow to the test line where they are immobilised by anti-rabbit/goat antibodies. If both the T and C lines form, the result is considered positive but the more cleavage that has occurred the greater the strength of the T line and the weaker the strength of the C line. To ensure there is no signal at the T line when no cleavage has occurred, the correct amount of reporter must be used. Using too few reporter probes will leave some gold nanoparticles free to flow to the test line. However, using too many reporter probes relative to the number of binding sites can lead to the hook effect where excess probes bound to gold nanoparticles are no longer immobilised at the C line and so flow to the T line. [3]