Nedd4 Family Interacting Protein 1 (Ndfip1, synonym N4WBP5) is a membrane protein located on the Golgi apparatus and endosome. It's a evolutionarily conserved protein with three transmembrane domains. This protein is thought to be part of a family of integral Golgi membrane proteins.

As said in the name of the protein, ndfip1 interacts with protein Nedd4, a ubiquitin-protein ligase. Nedd4 has 3-4 WW domain, a carboxyl-terminal Hect (homologous to E6-APCarboxyl terminus) domain and in most cases an amino-terminal C2 domain. Ndfip1 binds Nedd4 WW domains via the two PPXY motifs present in the amino terminus of the protein.

Ndfip1 act as an adaptor for Nedd4-like proteins and their putative targets to control ubiquitin-dependent protein sorting and trafficking, ESCRT pathways that involve sorting ubiquitinated cargo into endosome is majorly involved in transporting protein out of cell using exosomes. The process can be separated to the following steps:

1: E3 ubiquitin ligase Nedd4 binds its WW domain to the PPXY motif on Ndfip1, and the cargo that also has ww domain binds to another PPXY motif on Ndfip1. 2: Nedd4 act as scaffolding proteins to indirectly facilitate the transfer of ubiquitin by bringing E2 and substrate proteins into close proximity. 3: The ubiquitinated cargo is loaded into the endosome by the ubiquitination related endosomal sorting pathway ESCRT. 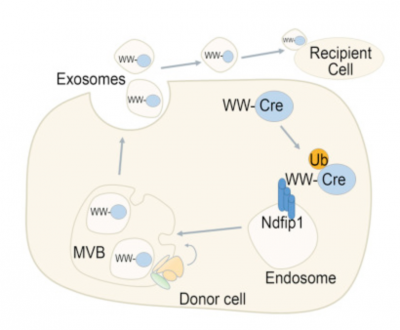 Hence, co-expression of Ndfip1 and WW tag labeled protein can actively ubiquitinate target protein and made it loaded into exosomes and create exosomes for medical use. This part should be used along with BBa_K2794003 WW Tag3 and BBa_K2794004 WW Tag4. 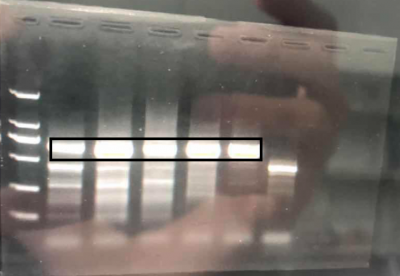 Team SHSU_China used pRK7-N-FLAG as their vector backbone because the FLAG tag at the N-terminus can be used in western blot to prove effective expression of protein. The EcoRI and BamHI sites in MCS are used to construct the plasmid.

Team SHSU_China used HEK 293T cells in their exosome experiments. After using sequencing to conform the sequence of Ndfip, 2ug of vecter is transfected to a 60mm plate using lipofectamine 2000. Exosomes are extracted from the 4ml culture media using total exosome isolation kit (from cell culture media) from Invitrogen. Cells and exosomes are lysed using Ripa.

Cell content western blotting first proved successful translation of PNW3V plasmids inside HEK 293T cells. Exosome content shown pale fusion protein band around 30kda. TEM result of sample shown that the protein doesn’t effect the shape or the concentration of exosomes. COD result compared to normal exosomes shown that the COD value increased but the difference is not as huge as PNCV transfected once.