CD63 is a member of the transmembrane 4 superfamily, also known as the tetraspanin family. The proteins mediate signal transduction events that play a role in the regulation of cell development, activation, growth, and motility. This encoded protein is a cell surface glycoprotein that is known to complex with integrins. It may function as a blood platelet activation marker.

CD63 (varient 1) passes through the membrane 4 times. The N- and C- terminus is both located inside the membrane. The protein has two extracellular cringle (EC1, EC2) and one intracellular loop (IL), with EC2 significantly longer than EC1 and carries main cellular functions. 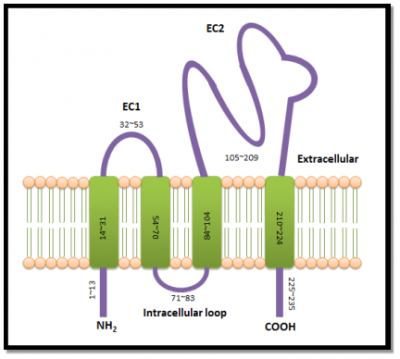 CD63 is recently researched and used in the field of extracellular vesicle (EVs) research. Due to its strong bond on EVs, it is used in exosome identification, extraction and targeted therapy. A protein sequence can be attached to either the N- or C- terminus so that a protein cargo can be loaded into exosomes. This method is refereed as membrane protein anchoring. There's also research using modified CD63 which has N- terminus out of membrane so that a signal peptide can be attached to the N- terminus for targeted protein therapy using exosomes.

Using CD63 to load protein into exosomes requires making a fusion protein sequence in a mammalian vector backbone. Team SHSU_China used pRK7-N-FLAG as their vector backbone because the FLAG tag at the N-terminus can be used in western blot and further conformation that the protein cargo is inside the membrane. The fusion protein required a stop-codon-removed CDS, so the following primer is used:

The HindIII and XbaI sites in MCS are used to subclone CD63 into the vector. In team SHSU_China's project, CD63 is used to load Vitreoscilla hemoglobin (vhb) into exosomes, so another pair of primers is used to clone Vhb from pSB1C3：

BamHIand EcoRI sites are used to subclone targeted sequence into the vector to form the CD63-Vhb fusion protein.

Team SHSU_China used HEK 293T cells in their exosome experiments. After using sequencing to conform the sequence of the fusion protein, 2ug of vecter is transfected to a 60mm plate using lipofectamine 2000. Exosomes are extracted from the 4ml culture media using total exosome isolation kit (from cell culture media) from Invitrogen. Cells and exosomes are lysed using Ripa.

Cell content western blotting first proved successful translation of PNCV plasmids inside HEK 293T cells. Exosome content shown successful result of fusion protein band around 40 kda. TEM result of sample shown that the protein doesn’t effect the shape or the concentration of exosomes. COD result compared to normal exosomes shown that the fusion protein contains heme group that increases the chemical demand of exosomes and thus proving the function of Vhb is not disturbed. Also, color difference can be seen between normal and fusion-protein containing exosomes.