The asr promoter was first described by Suziedeliene et al. in 1999. They showed that asr is induced under low pH which is about pH 4.8, and it is controlled by the phoBR system. From the article they have published, the promoter is named as acid shock RNA (asr) promoter due to the RNA that has been transcribed after putting the E. coli into a low pH condition.

In 2007 Ogasawara et al2. found out that there is another regulatory system that controlling asr transcription by using SELEX to find the binding sequences of PhoQP-RstBA. Hence the asr promoter is directly controlled by two different systems, the phoBR system activated through low inorganic phosphate and the RstAB system sensing the pH while it is controlled by PhoQP-system activated by low Mg2+ concentrations.

To expand the possible application of asr promoter, iGEM NCKU_Tainan 2018 put it together with sfGFP and tested this reporting system with more delicate pH gradings since a green fluorescent would be expressed once the promoter has been activated. In conclusion, we could monitor the pH in the surrounding medium in our device at any time by observing the color change of the medium.

After finishing the Pasr biobrick construction, colony PCR is run to check the success of ligation. The length of the DNA is verified with agarose gel electrophoresis. 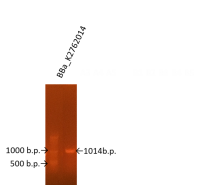 Pasr is reported to be induced in acidic condition. We think that it can be used to report the abnormal acidity of the medium. We thus determine to measure the fluorescent intensity in a short period of time. We first incubated the bacteria to log phase (within 2 hour) with LB medium. We then centrifuged the broth and suspended the pellet with pH modified M9 medium (the pH value is modified with 1M HCl). We then took the sample and incubate in the 96 well and measure its fluorescent intensity for every 3 minutes. We found out that the promoter Pasr will be induced at the pH value below four within 30 minutes. The different fluorescent intensity can be observed within 30 minutes. The fluorescent had the peak at pH value of 4.25. 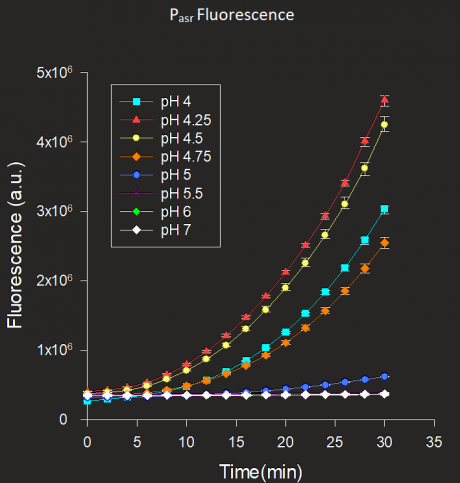 Based on the data has shown above, we could conclude that Pasr is an acidic promoter as it has a high expression of fluorescent at pH 4.25 and pH 5. The results show that Pasr constructed pH sensing system can be used as an alert. When the medium turns acidic, fluorescent can be easily observed. We believe that this system can also be applied to various bio-detection system.